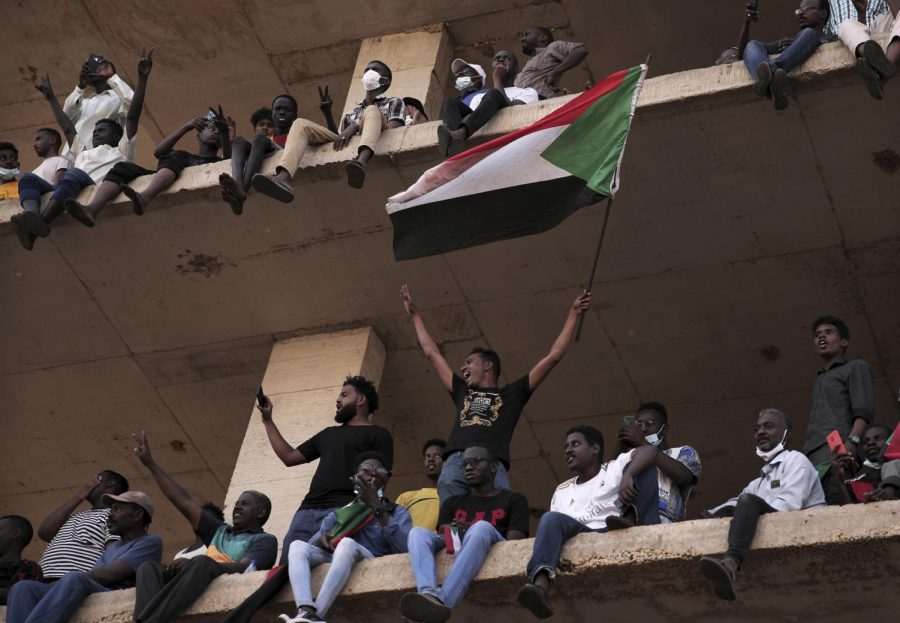 FIGHTING FOR DEMOCRACY: Residents of Sudan participate in a pro-democracy protest outside Khartoum on Oct. 30.

Less than two years after Omar al-Bashir, Sudanese war criminal and former autocrat, was ousted from power in a military coup, the country is once again victim to another coup. This time, it’s aimed at the removal of the country’s power-sharing transitional government and the dismantling of the nation’s democratic project, which was leading the country into elections in 2023.

The coup, which took place on Oct. 28 in the capital city of Khartoum, was carried out without initial violence and in a rather fast manner. Lt. Gen. Abdel Fattah al-Burhan, Sudan’s top military general, had Prime Minister Abdalla Hamdok put under house arrest together with cabinet members and ministers, according to the New York Times. Meanwhile, military rapid groups blocked the capital’s main streets and a speech was broadcasted in state TV, in which the coup was declared successful and necessary to avert a civil war, as covered by Reuters. Only a few weeks before the events unfolded, as noted by Foreign Policy, the United States Department of State had sent U.S. envoy Jeffrey Feltman to Sudan to negotiate the future of the nation’s democratic transition with both civilian and military leaders, including al-Burhan and Hamdok. Feltman was reassured by the coup leader that governance was not going to be disrupted, but it is now obvious that he was lied to, something that Sudanese Ambassador to Washington D.C. Nureldin Satti, interviewed by The World, considers enough of a reason for the Biden administration to react by freezing aid. Indeed, the international community as a whole has been quick in condemning the takeover.

In the hours and days following the military coup, the European Union, the United States, the African Union and other institutions condemned al-Burhan’s actions, both via public statements and legal actions. According to ​​the Department of State, Ambassador Satti hypothesized that the U.S. government froze $700 million worth of aid aimed at Sudan, an action that was condemned by the nation’s main opposition parties while applauded by diplomatic officials fearing their misuse towards the reinforcement of the country’s army. The African Union, on the other hand, suspended Sudan’s participation in the international organization until the restoration of the country’s transitional government.

Despite the successful takeover of the government, analysts are still cautious in regards to what is going to happen next and whether al-Burhan will fall to popular demands, worrying neighboring autocratic nations, or respond with force to reject democratic aspirations, as hypothesized by Jonas Horner, senior Sudan analyst at Crisis Group. The country, in fact, has a history of social mobilization that has managed in the past to bring down the autocratic regime of al-Bashir and to force the military to establish a joint civilian-military government. Soon after the news of the coup broke out, thousands of protesters took to the streets and demanded the freeing of the Prime Minister and other officials under house arrest and the restoration of democracy. As of the time this article was written, over 170 people were injured and more than 11 killed by Sudan’s security forces attempting to contain popular dissent, according to Radio France Internationale. Despite the violence perpetrated by al-Burhan’s military allies, popular opposition and organization is still thriving with mass strikes and protests being planned as well as the coup leader promising free elections in July 2023 and a possible continuation of the transition to democracy started in 2019.

The question that is left to answer, now, is why al-Burhan would disrupt the transition to democracy and why he would be so quick to agree to divergent popular demands instead of forcing his position on the state, as it would provide him with broad action windows in terms of establishing personal rule. Analysts are still unsure, but some observations can be made. Firstly, as pointed out by the New York Times, the military was growing impatient with its civilian counterpart regarding the determination in investigating and supporting international scrutiny over former autocrat Omar al-Bashir, convicted by the International Criminal Court  (ICC) of multiple counts of crimes against humanity in Darfur, Sudan, including genocide. Al-Burhan, in fact, had a military leadership role in both Darfur and Yemen’s civil war, which puts him in an unfavorable position in front of the ICC’s and Sudanese judiciary. The general’s intentions, by carrying out a coup, might have been rather personal, as he is able to temporarily protect his persona from international and internal investigations. However, a raging civil war in neighboring Ethiopia, the devastating effects of the COVID-19 pandemic on the country’s healthcare system, a collapsing economy heavily reliant on international assistance — temporarily suspended until civilian rule is restored — and massive popular protests might be the underlying reasons behind al-Burhan’s decision to promise free and democratic elections in 2023.

Today, all that is left to do is wait. We have already witnessed the unpredictability of the military in such a delicate moment and while the outcomes of the coup, as laid out by the junta, might indicate a path toward elections and possibly normality, the hopes of millions of Sudanese are now in serious danger.