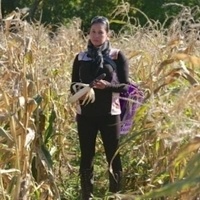 The Colgate community welcomed Angela Ferguson, Onondaga Nation Eel Clan member, this past Thursday, Nov. 4 to discuss Haudenosaunee agriculture and food sovereignty. The lecture was hosted by the Native American Studies Program and took place in the Persson Hall auditorium, which quickly filled up as students and professors filed in to listen to what Ferguson had to say.

The lecture was introduced by Michelle Bigenho, professor of anthropology and Africana & Latin American studies and the director of the Native American studies program with a land acknowledgement: “Colgate University recognizes our collective responsibility to acknowledge our colonial history. Our campus sits on the traditional lands of the Onyota’a:ká: known as the People of the Upright Stone and Oneida Indian Nation of New York.” Bigenho then welcomed Ferguson to the podium to begin her talk.

Ferguson started her lecture by introducing the other Haudenosaunee women she brought with her, and defined Haudenosaunee agriculture as a way of life rather than just the growth of food for consumption. Food encapsulates many important aspects of Haudenosaunee life such as their spirituality and physicality. She then pointed to the table next to her, on which various types of corn were displayed.

“These are our relatives on this table” she stated, informing the audience of her people’s cultural history and connection to the food they grow. Ferguson shared that this topic is one close to her heart, and that it was difficult to share her family with others.

Ferguson then segued into the reasoning behind the return to ancient cultural practices surrounding agriculture. She explained that she began her initiative to make important changes to her tribe’s agricultural practices back in 2015. Her people faced many health problems, such as diabetes and heart disease, that were directly related to their food choices. As a remedy for this issue, Ferguson and four other Haudenosaunee women created a proposal, arguing for the reframing of agricultural practices, which would allow for the resources to feed 2,000 people. Through this initiative, Ferguson and her partners were able to achieve this goal and bring back the connection between the Haudenosaunee and their crops. Because of the efforts made by these women, many members of the Onondaga Nation did not have to worry about food insecurity during the pandemic; Ferguson said that she did not go to a grocery store for the first 16 weeks of the pandemic and was able to live off of the food she cultivated herself. She also highlighted how one of her peers was able to significantly improve the health of her diabetic nephew as a result of a diet rich with Haudenosaunee-grown and cultivated food.

Ferguson highlighted how she wants people to redefine their relationship with food. In light of increasingly pressing issues that will affect how people eat food, such as climate change, she advocates for the creation of more community gardens, and for people to work towards a connection with food they grow themselves.

“Many hands lighten the load” she said, encouraging people to start small with family gardens. She also highlighted how agriculture is not the only way to obtain food and that hunting and foraging are an important part of food sovereignty as well. Ultimately, she wants everyone to work together to ensure that the planet is being taken care of and that people are eating well.