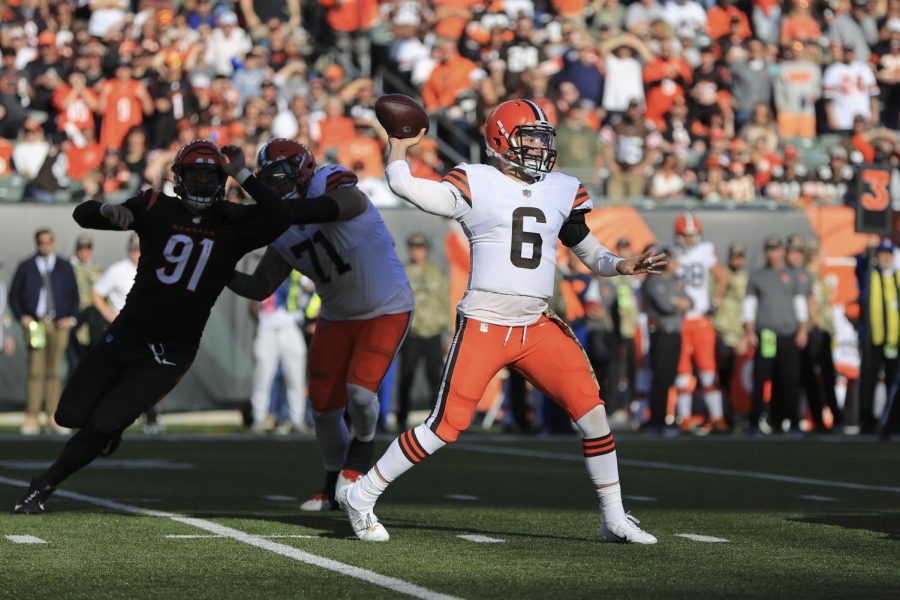 BAKING WINS: Following a win at Cincinnati and the end of the Odell Beckham Jr. drama, Baker Mayfield looks to lead the Browns to victory against the Patriots.

Okay, I think my pick last week should be disregarded considering the Aaron Rodgers COVID-19 controversy. Had I known Jordan Love would be the starter Sunday afternoon, there is no chance I would have taken the Pack. Anyway, let’s turn our attention to Week 10. For this week, I’m taking the Cleveland Browns to hold two against the New England Patriots. I know the Patriots are playing great football right now and are coming off a dominant win against Carolina, but the Browns are still the better team in my opinion. The Browns went into Cincinnati and blew the doors off of a Bengals team that has been pretty solid (barring the last two weeks) this season. Baker managed the game efficiently and effectively, while the run game spearheaded by Nick Chubb took care of business. Cleveland’s defense also caused three turnovers and wreaked havoc all game. I expect Cleveland to go into Gillette Stadium on Sunday and get a much-needed win.

Everyone wrote off the Titans after the gruesome injury to Derrick Henry. Henry was carrying Tennessee on his back throughout all the success they had this season. He was dominating opposing defenses and leaving a trail of missed tackles behind him. Without him, fans feared the Titans had lost their season. Yet, with a revived defensive line and a pass-oriented offense, Mike Vrabel has found a way to keep the Titans alive. After a Sunday Night Smackdown of the Los Angeles Rams, the Titans have taken hold of the top spot in the AFC and have proved that this season is not dead.

The same might not be true for the New Orleans Saints. The Saints have had a rough season regardless of injury. With the retirement of Hall of Fame Quarterback Drew Brees, New Orleans hoped James Winston would be his successor at the position. After a rocky start to the season and Winston tearing his ACL, the Saints have no choice but to let Trevor Siemian run their offense. Without a star receiver, it’s very hard to get a passing game to work with Trevor Siemian at the helm. The Titans revamped defense will trample over Siemian and lead Tennessee to victory in Week 10.

The Chargers and Justin Herbert had their streak of bad games against the Ravens and the Patriots in weeks seven and eight, but I think they’re back. Although the Chargers beat the weakened Eagles by just three points, this is a huge win and will propel them in the right direction. Justin Herbert was 32 of 38 with 356 yards, two TD’s and a 123.2 QBR, his second best rating of the year. The young quarterback had trusted weapon Keenan Allen playing well for him, who had 12 catches for 104 yards. Austini Ekeler has to improve in the run game but the prospects are promising. The Chargers may have been down in the dumps for a few weeks, but they are back, baby. The Vikings played themselves a good game against the Ravens this past weekend, losing a devastating one in overtime. I have absolutely no confidence in Kirk Cousins or the 3-5 Vikings. They have been wildly consistent all year and have no good wins. I wish this was a primetime game because Cousins would fold like a cheap suit, but they still have no chance. One caveat is that the Chargers are the worst rush defense in football, so Dalvin Cook will have a field day, but they are only 1-2 when he rushes for over 100 yards, so I don’t think it will matter too much. Take the Chargers and the points and Go Chargers, Go (Arnold Schwarzenegger voice).

I picked the Rams to easily win last week over the Derrick Henry-less Tennessee Titans, and boy did they ever let me down. So what am I going to do this week? I’m going to pick them again. Sean Mcvay is 8-2 all time on the road after a loss, and this being a divisional game against one of his coaching rivals in Kyle Shanahan will only add more fuel to this guru’s gameplan. Matthew Stafford easily had his worst game as a Ram last week, throwing two interceptions. Look for him to bounce back as well and remind everyone how efficient and effective he can be. The 49ers have been lackluster throughout the season and haven’t won a game at home. That trend will continue on Monday Night Football. Give me a hungry, angry Rams team ready to rebound at Levi’s Stadium.