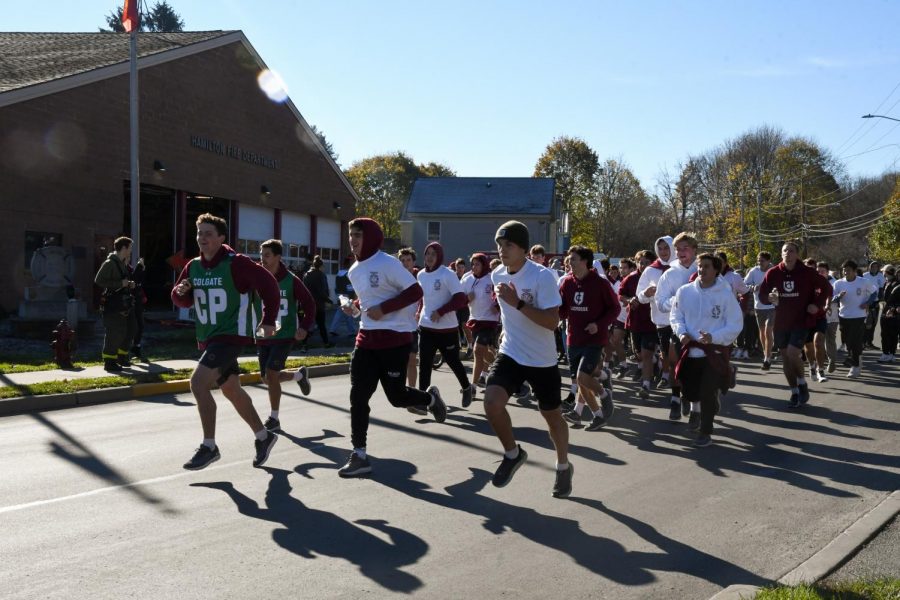 RACING FOR A REASON: Community members participate in a 5k race to celebrate the legacy of Colgate alumnus Clark Perkins.

Hamilton Fire Department student volunteer and junior Charlotte Birsh, who was involved in the organization of the event, explained why she believes it is important for Perkins’ legacy to be shared with Colgate and the broader Hamilton community.

“We still want to continue his legacy because everyone has said that he was a great person, a great friend,” Birsh said. “He cared a lot about service […] he was this pillar of honor and service and duty.”

Head coach of the Colgate men’s lacrosse team Matt Karweck shared why the team chose to gather together to be a part of the memorial run in honoring Perkins’ legacy.

“He was an unbelievable teammate and a guy that everybody liked and knew, he cared about other people more than himself,” Karweck said. “He had such an unbelievably bright future and [was] a great person and that’s why on our team we celebrate Clark Perkins every day.”

According to Karweck, the men’s lacrosse team goaltenders wear the letters “CP” on their jerseys at every one of their practices in honor of Perkins.

Junior Chris Burns, a goaltender on the men’s lacrosse team, shared his thoughts on why it was important for him to participate in the event.

“From what I’ve heard, he was always one of those guys who took care of his own,” Burns said. “He embodied the ideal perfect teammate who’s always there for everyone on the team. I’ve always looked up to him, and he’s kind of a role model for all of us.”

Hamilton resident and barber Jessica Kincaid recalled what it was like to personally know Perkins before he passed on August 26, 2020 from a surfing accident in Texas, according to Colgate Magazine.

“He just always had a smile and enthusiasm […] he was there to support anybody and help anybody he can whenever he could,” Kincaid said. “He was huge on bringing the community together, and the community here is Colgate and Hamilton. He did a great job of being connected to both and helping anyone.”

The Clark Perkins Memorial Run had a large turnout, with members of both the Colgate and Hamilton communities having gathered on Saturday to participate in the run in honor of Perkins’ legacy. According to the Instagram page dedicated to the Clark Perkins Memorial Run (@1stltclarkperkins_memorialrun), community members across the country, and the world, gathered to celebrate his legacy.

Colgate Alumna Lydia McGrath ’21 shared her experience participating in the 5k with her mom in her and Clark’s hometown.

“I did it at home in Fairfield, CT with my mom, where I grew up with Clark and the whole Perkins family. I actually live on the street where they used to live when we were little, so their old house was on our route.” McGrath said. “It was really special to do the 5k for Clark at home with my mom and pass by his old house and remember funny little memories from our childhood. Having that personal connection while doing the 5k, and watching the many Instagrams stories from the people doing it in Hamilton, and all around the world, was really awesome. It just goes to show how far Clark’s love has traveled.”

Proceeds from the fundraiser will benefit Fountain Fire Company #1 of the Hamilton Fire Department and the Clark Perkins memorial scholarship fund.