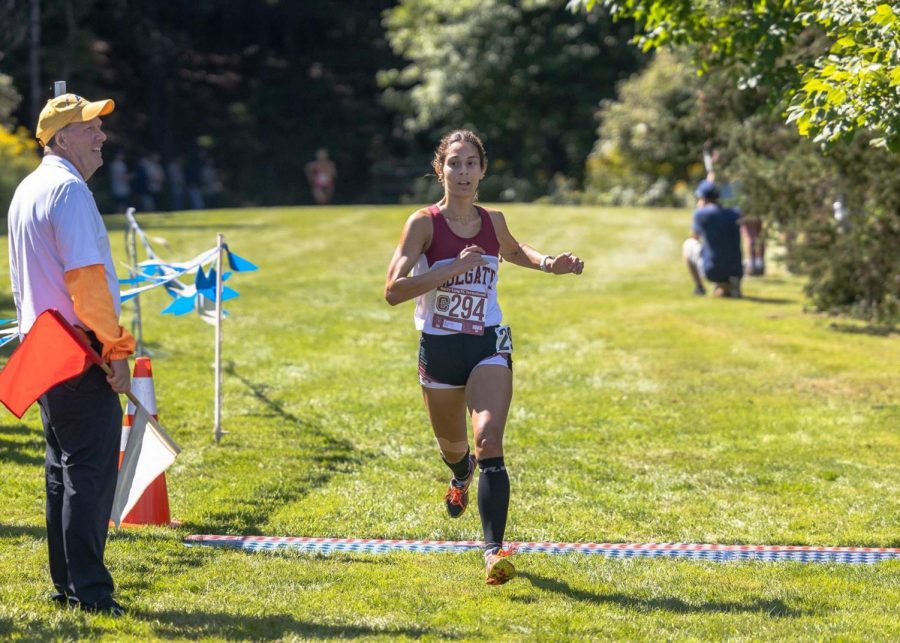 The Colgate Cross Country team is closing in on the end of their season with only a few meets left for both the men and women runners. The team faced several new challenges this season, starting with the loss of long time coach Luke Burdick. Junior captain Sophia Manners, discussing the season as a whole, noted how the team’s mentality changed over the season.

“We’re wrapping up now. It was pretty successful overall,” Manners said. “We obviously had our challenges, we lost our coach at the beginning of the season, but we were able to rally together. Our strong team comradery really helped us through the season.”

The cross country season never truly seems to end, with most runners doing their best to stay in shape throughout the season.

“We train pretty hard over the summer. That’s when we do the majority of our base training,” Manners said.

Unfortunately situations outside of runners’ control, such as injuries, can prevent them from fully getting back into shape before the season started, as was the case with Manners. She noted how helpful it was to get back with the team and start training together.

After the early departure of Burdick, Harlis Meaders was forced to fill in, and despite his lack of knowledge in distance running, he was able to work with captains to coordinate the best training regimen for the team. On Meaders’ coaching, Manners said, “He really put 100% of his effort into educating himself about distance running, making sure that we had everything we needed to succeed. The other captains and I met with him frequently and made sure everyone knew how to train.”

Junior Zach Williams feels Meaders’ greatest strength was his ability to rely on others.

“Coach Meaders was able to create a training regiment by reaching out to colleagues and relying on the experiences and knowledge of upperclassmen to help make the training block as productive and effective as possible,” Williams said.

The team worked hard to achieve some individual personal bests, and despite their adversity, they were able to improve on their placing in the Patriot League meet.

For some runners, they will continue their season over the next couple weeks with a few more competitive meets. For some, though, their season has ended. With that comes graduating seniors who have finished their athletic careers. Alex Almer, a senior who started his career as a walk-on first-year having never competed in cross country, has finished competing in his final meet as a Colgate student. When asked whether or not this year was that different he said the day-to-day training wasn’t, but noted the mentality at each race changed.

“It’s interesting knowing that every meet is kind of my last at that track or that event,” Almer said. “That’s probably what’s most different; it seemed more important for me to enjoy every moment.”

When asked about his favorite memory as a Colgate Raider, Almer noted how his first meet and his last meet happened to be on campus.

“It was great to have my home meet this season; I actually got to have my mom and a couple friends come up and surprise me,” he said. “My first cross country meet was actually my meet at Colgate. I had never done cross country before, and now everything feels full circle. I definitely feel a connection to that space now.”

Although the ending of his career was bittersweet, Almer was proud he ran all four years. His hope is that after the squad gets a new head coach, that they will continue to improve.