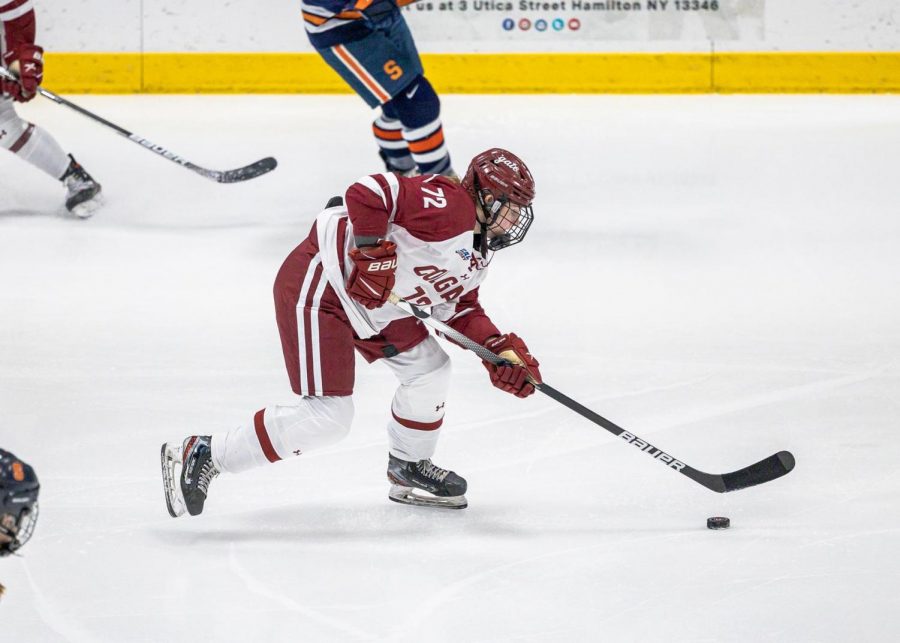 CONFERENCE DOMINATION: Junior forward Darcie Lappan carries the puck up the ice during Colgate’s 7-1 victory over Union at Class of 1965 Arena.

With the season well underway, the Colgate Women’s Ice Hockey team has a 12-3 record, and is 5-1 in conference play, sitting in fourth place in the Eastern College Athletic Conference (ECAC).

But to Head Coach Greg Fargo, starting the season 8-0 didn’t really affect the team much.

The team has looked confident and self-assured, even with key players like sophomore Kalty Kaltounkova missing for a few games, who is the team’s highest goal scorer and points leader. Even so, Fargo thought the 8-0 start to the season was nice but they have known all along they have bigger goals they are working towards and more room to improve upon. Players felt hopeful after that start, too.

“The team was confident and very excited for the potential we had in the room,” junior forward Danielle Serdachny said of a potential that was quickly garnering results on the ice.

However, the Raiders did hit a bit of a snag before going into conference play, dropping two games in a row to Minnesota over Family Weekend. Despite this, Fargo didn’t seem too worried. “In playing great teams like Minnesota, you expose yourself as a program,” Coach Fargo said. “You really put yourself out there by playing the top teams in the country.”

“We now know exactly where we need to make gains as we look ahead. I think these are really valuable lessons to learn in October. A lot of times you end up playing these types of games later in your season, and by then it’s too late. This gives us a good roadmap of what our new standard looks like and we learn that early enough in the season to level up our game.”

“I don’t think any of us [the players] viewed the weekend as rough necessarily as much as an opportunity to play a really great team,” she stated about the losses. “This builds character, strength and teaches us to be resilient.”

Since their losses to Minnesota, the team has gone 4-1, and two of those wins came in overtime. Going into conference play, Serdachny felt the team was raring to go.

“Coming off of a weekend where the competition is great makes us a stronger team which allows us to face tougher competition. I think we were just ready to play, and excited for the next opportunity to succeed.”

A strong 4-2 win over Dartmouth on the road would be just the start the team was looking for as they entered ECAC play. Fargo felt that the team didn’t do anything out of the ordinary to prepare after the losses: “More than anything, our team was hungry to get back out there and play well. I think our team is hungry to get better each week, regardless of prior results.”

At one point this season, the Raiders were ranked as the number four team in the nation. Fargo felt that this was nice recognition of the talent in the organization, but the team was doing their best to ignore it.

“I can tell you that as we thought about this season and talked about it in the off-season, we didn’t focus on being a top-5 team in October. That wasn’t on our radar. We talked about wanting to be the best team in college hockey at the end of the season,” Fargo said. “Our focus has been on learning and growing and creating an environment that everyone enjoys coming to everyday where we learn, grow and push each other to be the best we can be. When you make the most out of each day you have, and you do that day in and day out, you’re going to like where you’re at in the end and that is what we’re focused on.”

This approach has appeared to work well. The Raiders have played aggressive, offensively-minded hockey even when on penalty kills, and appear to be improving with each passing game. Despite Fargo’s dismissal of the rankings, Serdachny seemed to be a bit more interested in how the team was being seen by the wider hockey community. To her, the rankings are both a blessing and a curse.

“It’s definitely an exciting thing for our team,” Serdachny said. “I think anytime the team is ranked we all feel a bit of pressure to perform and win. It also pushes us to be our best and win games which is a positive thing too.”

The Raiders are in a strong spot going into the middle of the season, but according to Serdachny, “The best moment for the team this year has been the ability to play in front of fans.”

“After a year of having no one able to watch in person, it has been great to have that back.”