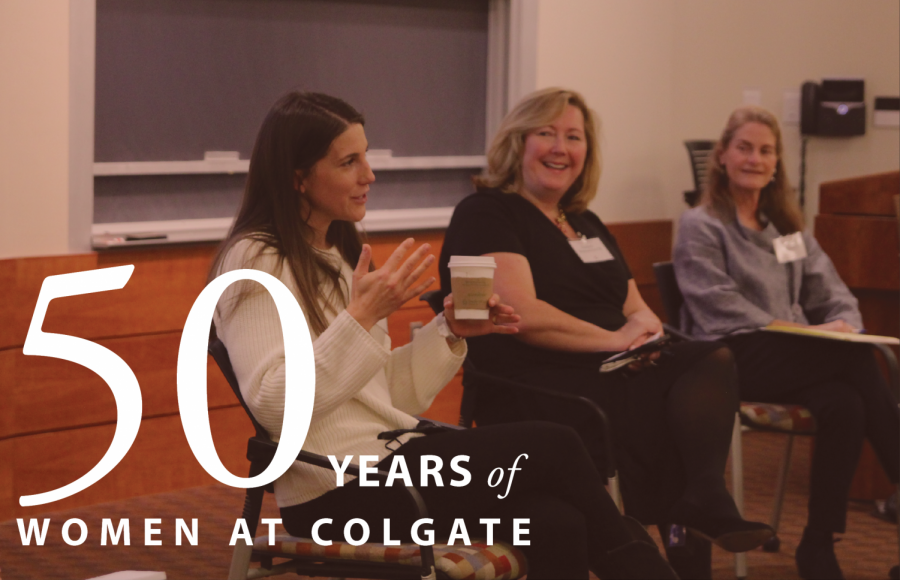 The University welcomed alumni to campus in celebration of Colgate’s 50 years of coeducation. Among the weekend of events included a keynote dinner featuring esteemed alumna Patricia Hayling Price ’76, as well as women faculty and alumni panels. Originally scheduled to take place in September 2020, which marked the offical 50th anniversary since the first class of women arrived on campus in Fall 1970, the pandemic forced the in-person celebration to be postponed, according to Jennifer Stone, Associate Vice President of Alumni Relations and Annual Giving and Leadership Giving.

The weekend was sponsored by The Colgate Women’s Leadership Council (WLC), a group of Colgate women alumni and students who aim to inspire engagement in philanthropy, according to WLC chair Liz Buchbinder ‘77. According to Buchbinder, the University held virtual celebrations marking the official anniversary last year — including an event featuring CNN Chief Political Analyst and Colgate alumna Gloria Borger ’74 — but the WLC valued hosting an in-person event for the anniversary once public health guidelines allowed the organization to invite alumni to campus.

“It became clear that we always thought that it was important to actually celebrate this milestone with a live event, [to] bring women back to campus,” Buchbinder said.

All Colgate alumni were welcome to attend the events this weekend, but the first classes of women were the guests of honor, according to the event program.

“In 1970, Colgate changed for the better. That year, Colgate admitted the first fully recruited coeducational class in University history, the Class of 1974. Members of the Classes of 1971, 1972, and 1973 were also among the first female transfer students,” Buchbinder wrote in the program’s introduction.

Attending select classes and a conversation with University President Brian Casey were also among the events held for the returning alumni.

“One of the really cool things that we’re offering our alumni is the opportunity to attend an actual class [Friday] morning. They are incredibly excited as you can imagine,” Stone said. “And then throughout the day, we’ve got different panel discussions. [The alumni] are going to be able to connect with faculty in the afternoon at a special reception. And then we have a series of programs throughout Saturday.”

A handful of student leaders were invited to attend a number of the events, including senior Eliza Leal, co-President of the Senior Honor Society. Leal attended student-moderated alumni panels, whose topics centered on inspiring change, empowering women and social justice. Diane Ciccone, a member of Colgate’s first class of women in 1974 and the namesake of Colgate’s first residential commons, was among the panelists.

“All the panelists shared their experiences at Colgate and current careers, emphasizing the importance of the lessons learned here that were only strengthened in significance in ‘the real world,’” Leal said.

Leal was also invited to the weekend’s keynote dinner featuring remarks from alumna Patricia Hayling Price, president of liveworkstrategize LLC, a leadership consulting firm. Her career accomplishments also include a Watson Fellowship, 24 years at IBM and an acting career with a feature NBC’s “The Doctors,” among other accolades.

“[Price] addressed the importance of acknowledging intersectionality in the work environment and achieving a sense of belonging at Colgate,” Leal said.

According to Stone, the weekend’s events were not only an opportunity to celebrate women alumni, but to look ahead to the future of what Colgate women can accomplish as the University enters its third century. A faculty panel for the alumni who returned discussed how the University will move forward in the next 50 years.

“Yes, we wanted to celebrate the accomplishments of the women who have graduated over the last 50 years and all, but we also want to look forward, like what is coeducation and what is Colgate looking at going forward?” Buchbinder said. “And of course, [there is] going to be a lot of focus on the Third Century Plan.”

According to Buchbinder, the planning of the celebratory weekend was a collaborative effort that included Alumni Relations and its director Jillian Cole, who managed much of the logistics, as well as Casey and the Office of the President and Vice President for Advancement Karl Clauss.

“I think it’s really important to point out that it is such a huge team effort,” Stone said.

Although Leal felt honored to attend the events of this celebratory weekend, she wished more students could have been involved in the discussions that occurred.

“My one qualm […] was the lack of communication of this event to the broader student body. I think a lot of students could have benefitted from hearing the words of these women who come from all walks of life, especially in the tumultuous times we are in now,” Leal said.

Students and alumni will have more opportunities to participate in the celebration of 50 years of coeducation at Colgate in with more programming in March, Stone said.