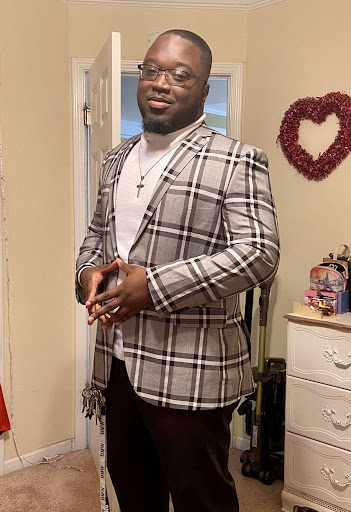 Printed with permission of Ahmaud Gabriele

“Give yourself credit for what you can do. Now find a way to do it a little better this week. You can do it!”

Every Monday, Ahmaud Gabriele, a senior from Atlanta, Ga., sends a motivational quote like the one above in the Colgate Class of 2022 GroupMe chat, along with multiple other group chats with which he’s apart.

“This actually goes back to what I used to do in high school,” Gabriele said. “In high school, every couple of days, I would post something on my story and it would be an inspirational thing. And then I’d post advice to certain things, depending on what people would ask for. I had always done it in high school, and I did it a little bit on and off while I was here, but then I really fell off because of [COVID-19]. And I started doing it again because honestly, something just told me to. I used to post them in the Grappling group chat, because I’m the president. So I would always send a little tidbit or like a motivational push for everybody. And then I was like, I can just do this to all the groups that I’m in. So I did it for my floor, my building group, a rideshare group chat that we have, Writing [and Speaking] Center, Admissions Office, and then my year group chat.”

According to Gabriele, students seem to react very well to these quotes, with his messages getting a lot of likes each week.

“This was the most surprising part about it,” Gabriele said. “I think there was one time in particular where I forgot to do it in the morning, and then somebody was like, ‘Hey, where’s our quote?’ And I’ve had a couple of students reach out to me and ask if I was okay …  and [thank] me for the messages. There were a number of students who have reached out and said that it was that message that touched them on a deeper level, because they were going through certain things. And I apparently said something that was helping them with that,” Gabriele said. “Getting those messages from time to time just motivated me to keep doing it more and motivated me to think about how I’m feeling and how other people might be feeling to continue doing those messages.”

When he’s not motivating other students, Gabriele works as a consultant for the Writing and Speaking Center and has served as a lead link on orientation link staff. As the president of the Grappling Club, he also planning their Jiu-Jitsu competition for next April. Gabriele plans to graduate in the spring with a double concentration in psychology and philosophy, and is very passionate about his work with his senior thesis in psychology, where his study looks at the effects of mindfulness on Black trauma.

“When it comes to the literature of mindfulness, there’s the actions like meditation, yoga, things like that. And then there’s the trait; we are predisposed to have the mindfulness trait, which is the extent to which we can be mindful in the present,” Gabriele said. “So my study is looking to evaluate if that trait serves as a buffer for trauma that Black people experience. There’s a lot in the literature about how the trait can buffer one or two types of trauma, and there’s also things about how the trait can buffer racial trauma in particular. But there’s nothing about multiple layers of trauma experienced by the Black community and how this trait mediates it. So my goal is hopefully to analyze all the data and come up with some interesting correlations between the [trait] and how people have dealt with certain traumatic things.”

Gabriele also obtained his Life and Health Insurance license in Georgia last year, and plans to continue selling, writing and advising people about these policies after graduation. Further down the road, Gabriele plans to get financial certifications and eventually be able to create his own financial planning firm.

“The goal of that firm will be to outsource financial planners and wealth management specialists to families and communities that can’t afford them,” Gabriele said. “And I am going to pay them, so I just have to figure out that second part of it, my payment part, but that’s kind of what I’ll be going for and what I’m hoping to do.”

Gabriele has demonstrated his passion for giving to his community and fostering positivity in many different forms. Be on the lookout for Gabriele’s next motivational messages on GroupMe.