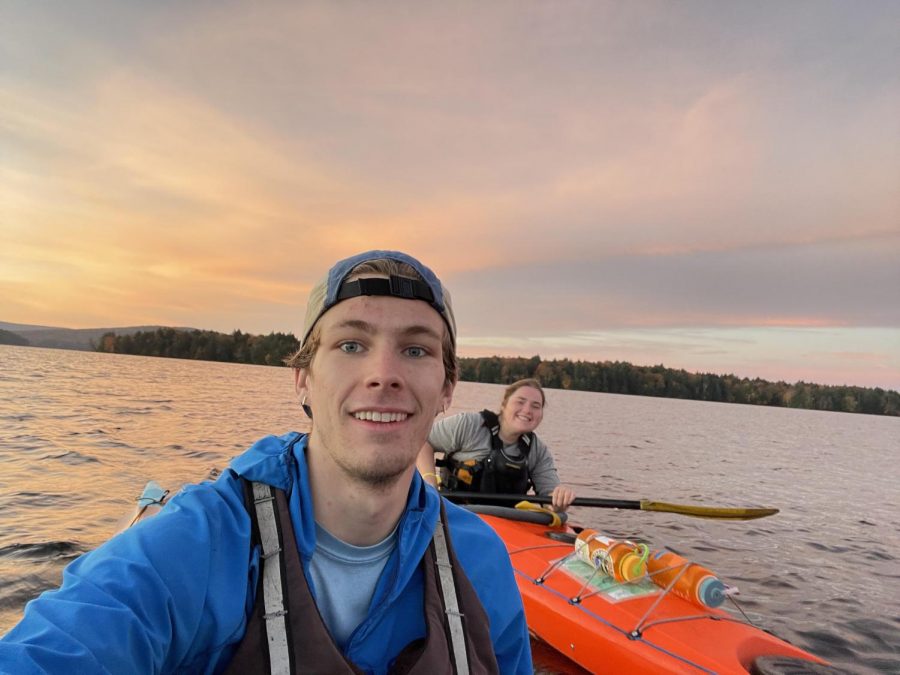 Printed with permission of Jack Underhill

As a double concentrator in philosophy and molecular biology, senior Jack Underhill has been grateful for the many experiences Colgate has offered, as they allowed him to find his true passions.

“[Outdoor Education] has been my primary commitment since [my first] year. I went through the training to be a staff member and I have been leading trips … for the last three years. I mostly focus on rock climbing, but I have also done backpacking, canoeing and kayaking,” Underhill said. “I applied to be the trainer this year which is basically running the training program for the next set of people joining upper staff. It’s been a super rewarding experience and to have them all form a group … and to see them get more comfortable being leaders has been really awesome.”

Despite being from Colorado, Underhill admitted he did not start cross country skiing or rock climbing until he came to Colgate and participated in a Wilderness Adventure pre-orientation program. In addition to Outdoor Education (OE), Underhill is also a member of the Phi Delta Theta fraternity and Senior Honor Society, both of which have allowed him to connect with peers he otherwise might not have met.

“I think a lot of people at Colgate … are kind of aware of the fact that Colgate can get a little insular … and it’s really easy to just become connected to the people that you are actively connected [to] through whatever you’re involved in on campus,” Underhill said. “So I think the cool thing about Senior Honor Society is that the way the group is constructed is with the goal of bringing people together from all these different sections of campus. That’s the only group … where everybody’s interests are so different, with the common thread of wanting to make Colgate a better place.”

Reflecting on his time at Colgate, Underhill found it difficult to find a single favorite moment, since it is the people that he has had the opportunity to meet that have been the most valuable.

“The first training trip I went on for OE I remember there was a sort of a moment where we were all sitting near our campsite looking at the sunset and I [thought] ‘These are my people now.’ And we continued to get closer over that year … and now we’re seniors,” he said.

He emphasized that these types of moments of tangible connection kept happening in all aspects of his Colgate experience. While this has been something Underhill has greatly appreciated, he also wished for more social fluidity that could make campus more connected such as live music or other random events made for students solely to have fun. Despite this feeling, Underhill emphasized that his best decision throughout college was staying true to himself. He advises first years to do the same.

“It’s kind of corny but I think the biggest thing … Colgate has taught me is that it’s worth the … difficulty in some sense to just be yourself and actually pursue what you’re authentically interested in. It is real that not everyone will vibe with that, but that’s kind of the point,” he said. “There is this sorting process that happens and if you create some version of yourself that is not actually aligned with the way you experience the world … you’re just not going to be happy with where you end up.”

Underhill originally thought he would pursue the pre-engineering track, which would have meant his time at Colgate would have ended a year early and he would be continuing his education elsewhere, but has found more happiness with himself because he pursued what he was genuinely interested in.

“I have been combining philosophy and [biology] and that has felt a lot less clear in terms of a path that becomes a career, but I also just enjoy it so much more. I’ve gotten so much out of taking philosophy [courses] and I never would have been able to do that if I had stayed rigidly attached to the idea of [engineering],” he said. “And that’s just one example. I think it’s happened over and over again with different aspects of myself, but I realized that just leaning into the way it is is better than trying to resist that.”