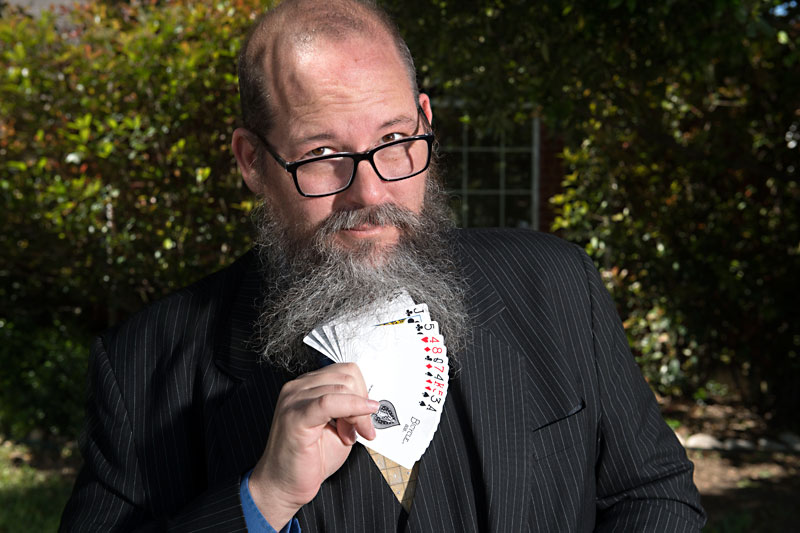 The Colgate Jewish Union (CJU) hosted Austin-based magician Brad Henderson for a hypnosis performance on Wednesday, Dec. 1. The show, which took place in Love Auditorium, fell on the fourth night of Hanukkah. Henderson began his performance by announcing, “Who’s ready to get hypnotized!” The magician dedicated the start of the show to questions he anticipated about the process of hypnosis.

“Brad comes to my sleepaway [camp] every year. Even after eight years, his shows were some of my favorite parts of camp,” she explained. “When I reached out to him on a whim to see if he’d come to Colgate for a Hanukkah hypnosis show, I really didn’t think that he’d say yes. He agreed to come to Colgate all the way from Austin, TX!”

Henderson explained how everyone could get hypnotized; it all depends on one’s willingness. He described how there is no harm to hypnosis to dispel common film-induced superstitious fears, but instead, getting hypnotized was equivalent to “eight hours of the most restful sleep you’ve had in your life.” The magician considered the audience to be entirely new to the experience and tried to assuage any negative preconceptions about hypnotism to assure we were comfortable.

Henderson began the show by testing specific exercises that would help him determine who had an aptitude for hypnosis. A group of volunteers then went on stage for the final selection. He then further tested those participants to narrow it down to the ten which he would complete the majority of the show with. The volunteers gave a half-hour performance on ten chairs facing the audience.

According to his website, the performance was aptly titled “Brad Henderson’s Amazing Humans” and described as “(where) your guests become the stars of the show as Brad Henderson unleashes their creative potential … your guests are sent into the deepest slumber only to have them cheering at imaginary horse races, riding an emotional roller coaster of fun, singing and dancing like pop stars, and much more!”

“I didn’t really know much about hypnosis, but it turned out to be very funny. It was a great show for both students getting hypnotized and the audience. It was also one of the biggest CJU [Colgate Jewish Union] events to take place. I am looking forward to attending next year,” CJU board member Aliza Reinstein said.

The audience and “stars” seemed to enjoy the entire show. In the end, Henderson directed the participants to have “no memory of anything that’s happened on stage … [to] use the energy [frm the therapeutic nature of hypnotism] as a battery, and [to hydrate] after show.” Not only did Henderson make many laugh throughout the show, he also made efforts to make sure the “stars” felt comfortable.

When asked how he could tell if someone is genuinely hypnotized, Henderson explained, “The hardest part is picking the people you are going to hypnotize; You can usually tell whether they were successfully hypnotized when you wake them up… People often try to deliver expectations, but part of what makes the show exciting is that the actions are sincere and the audience thinks they are sincere.”

He further explained how people often have the conception that a hypnotist can do anything. According to the magician, this is entirely false because if the hypnotist instructs people something they are unwilling to do, they will awaken from their hypnotic state. He continued to explain what he called “the fixation technique” — how hypnotists rely entirely on the subject’s focus and utilize tools such as music and lack of visibility to help in that respect. He recalled telling the participants to focus their attention on ceiling lights at the start.

Henderson believes he is “less of a hypnotist and more of a great improviser” because his performance has much to do with sleight of hand and elaborate stagecraft — not that it has stopped him from performing on the back of pickup trucks.

The event attracted more than 115 students and faculty, according to Kaller.

“It was such a fun experience and I’m so glad that so many Jews and non-Jews came to support the CJU for Hanukkah,” Kaller concluded.

Whether or not it’s truly magic, Henderson undoubtedly has a tremendous skill to induce laughter, joy and surprise. After all, students like Reinstein are already anticipating his return to Colgate’s campus next year.