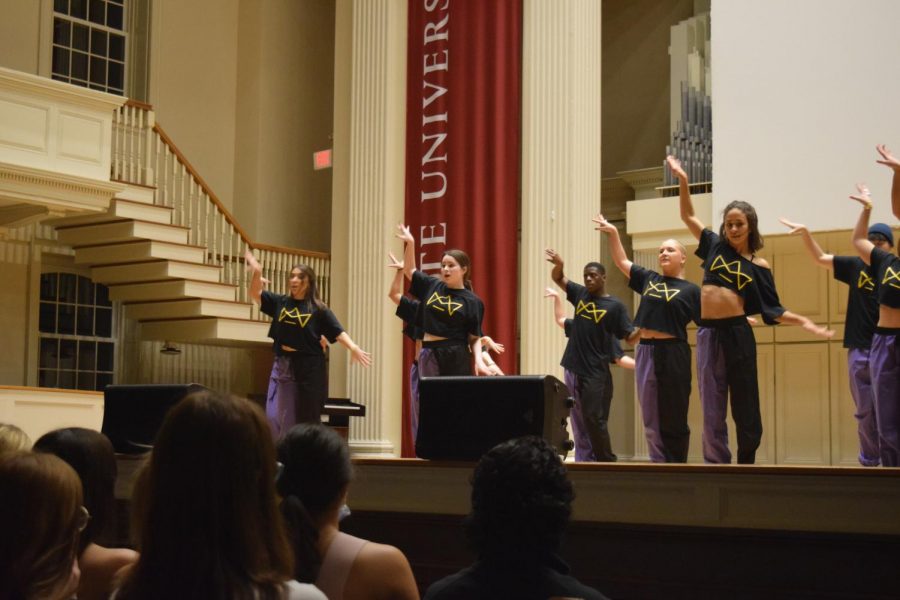 DIVERSITY IN DANCE: DDT performs at the chapel as part of Dancefest. Multiple dance groups at Colgate performed a variety of dances for students, faculty and community members.

Colgate’s twenty-fourth annual Dancefest was more than just a dance showcase — it represented a return to intimacy and a uniquely limber celebration of in-person performance. Crowded into the Colgate Memorial Chapel on Saturday, Dec. 4, students, professors and community members alike experienced live dance in all of its flexible, diverse glory once again.

Even the show’s few technical difficulties felt like a welcome human touch — an interpretive dance group’s music refused to start and they spent two or three minutes frozen in a silent tableau, punctuated only by giggles and occasional cheers from the audience, who above all were just happy to be there.

“What came through in this event was a huge sense of togetherness. The dancers were all amazing and seeing the chapel just packed with students really showed Colgate’s community in full swing,” said first-year Cooper Lowell, who attended the event.

The dancers were similarly excited by the prospect of exhibiting their hard work, and returning to the comfortable jitters of pre-show stage fright was somehow a relief.

“The experience was fantastic,” said first-year Fredy Alvarado, a member of the Latin American Dance group. “I had a lot of fun practicing and then performing onstage. I was nervous walking up but then the song came on and I just let the dance flow out. All of the practices were worth it in the end and we all did great.”

The dance styles ranged from traditional to unconventional, from cultural to counter-cultural, interpretive to explosive. Aside from their aesthetically pleasing nature, the only major thread between the pieces was the hard work and imagination put into them by the students who choreographed and performed them.

Colgate’s student-run dance organizations act as a means of self-expression and an outlet for passions that can often go neglected by college students. After all, self-care is far more complex than bubble baths, sleeping in and face masks; sometimes, it involves dedication and a desire to make something beautiful.

“I’ve been involved in DDT, a hip-hop dance group, since fall of my [first] year … I’ve been doing dance since I was three, doing a bunch of different styles,” senior Caroline Haigood said. “I really wanted to keep doing dance at Colgate so I could try out hip-hop in a ‘serious’ way.”

Dance creates an opportunity for pushing boundaries within a strict physical discipline and allows for artistic collaboration.