Hilary Almanza: A Voice for Change 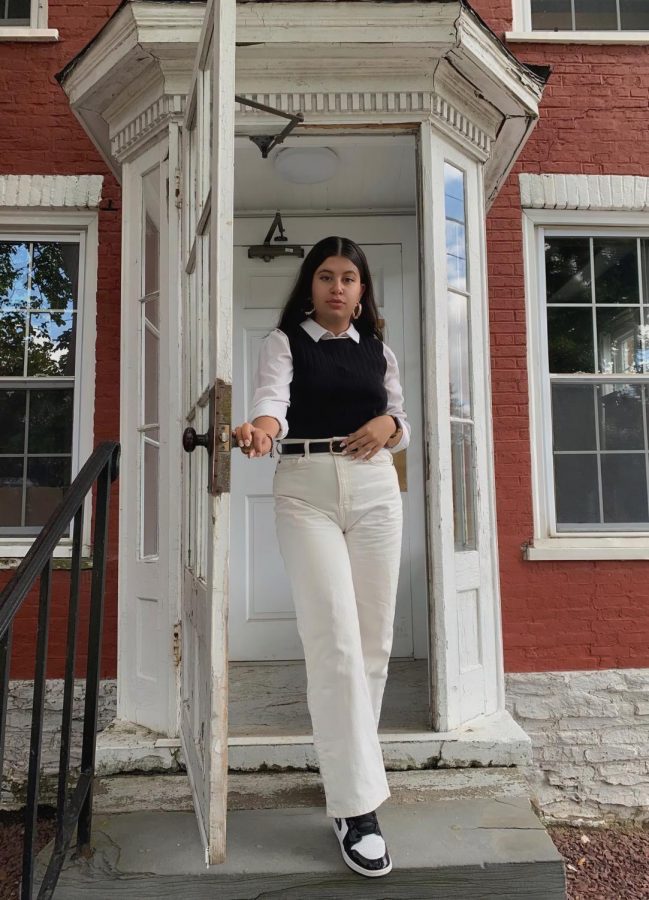 Printed with permission of Hilary Almanza

When it comes to difficult conversations, senior Hilary Almanza is never one to shy away from a challenge. Almanza, a senior from a neighborhood in Queens, N.Y. called Jackson Heights, proudly identifies as a first-generation college student and a member of the Latinx community.

As Almanza described her decision to come to Colgate, she reflected on her initial uncertainty about whether or not this was where she wanted to spend her next four years. She explained that what kept her at Colgate was the welcoming community and a desire to give back.

“I realized how great the community was for first-[generation students], [Office of Undergraduate Studies] and students of Latin descent — all these communities came together to keep me at Colgate and not just keep me, but made me want to invest in those communities and give back to all the things they had given to me when I was a [first-year].”

After completing the requirements for her political science concentration by the beginning of her junior year, Almanza turned to creating a second concentration of her own: Critical Identity Studies in Politics, Economics, and Social Institutions.

“It pulls from my IGD [Intergroup Dialogue] training … at Alana [Cultural Center]. What [IGD] does is it frames dialogue and conversations across differences and similarities of identity to come together … essentially not to discuss or debate but to really hear each other and understand complex social identities across differences. I wanted to create an academic [concentration] that would reflect the work that I was doing at Alana.”

By taking classes within the fields of political science, economics and sociology, Almanza’s studies explore people’s identities as well as the social institutions and lived experiences that shape their perceptions of themselves and their communities.

A member of the Latin American Student Organization (LASO) since her first year, Almanza hoped to apply what she was learning in class to a position within the core committee of the organization. However, this was not the only reason why Almanza ran for the position of treasurer in the fall of her junior year.

“I decided to run [for treasurer] because of all of the stuff that happened over the summer with [COVID-19]. My neighborhood was the epicenter [of the outbreak] in New York City, so a lot of the stuff that I had already learned about in classes about systemic racism, stratification of health, why certain neighborhoods are going to be affected more by certain kinds of health problems … all of that came to a climax last summer.”

Almanza wanted to bring her own lived experiences and willingness to initiate hard conversations to her role as president — a position she was elected to in the second semester of her junior year and still holds today.

“That was my main goal: to disrupt a historical whiteness that existed within LASO. Even though I am white myself, the idea of bringing these conversations to light that we never really had my [first year] or sophomore year was important, and that’s what we continue to do now.”

Outside of LASO, Almanza chairs the Senior Honor Society’s (SHS) alumni relations committee — a group of 26 peer-selected seniors. In the role, Almanza works to develop more continuity between the group’s alumni and current members. Almanza is also drawn to the group because of its focus on community service and education beyond Colgate’s campus.

“SHS is supposed to give back in a really meaningful way not just to Colgate but to the Hamilton community, to [the] Oneida [Indian Nation], to a lot of indigenous tribes around the area … it is supposed to effect meaningful change.”

As for her plans after graduation, Almanza expressed interest in continuing the work she has done with Diversity, Equity and Inclusion initiatives and building on her past experience working alongside a civil rights attorney. However, she also explained that this path isn’t without challenge.

“I think it’s tough because the pandemic has really disrupted what I thought this process was supposed to look like. I’m a first-[generation college student] so I have very little experience with parents going through this job-searching process … it’s been tough to navigate what even is out there.”

Despite obstacles, Almanza is cherishing her time at Colgate and encouraging others to do the same. When asked about any words of advice she has for current students, Almanza directed her advice to first-generation students and those within the Latinx community.

“It can be very intimidating to feel like you belong here and that everything’s not just going to be taken away from you at any moment … to anyone who is from a similar background [as me], or just in general who is feeling that kind of imposter syndrome, really just embrace the fact that you got here and you deserve to be here.”