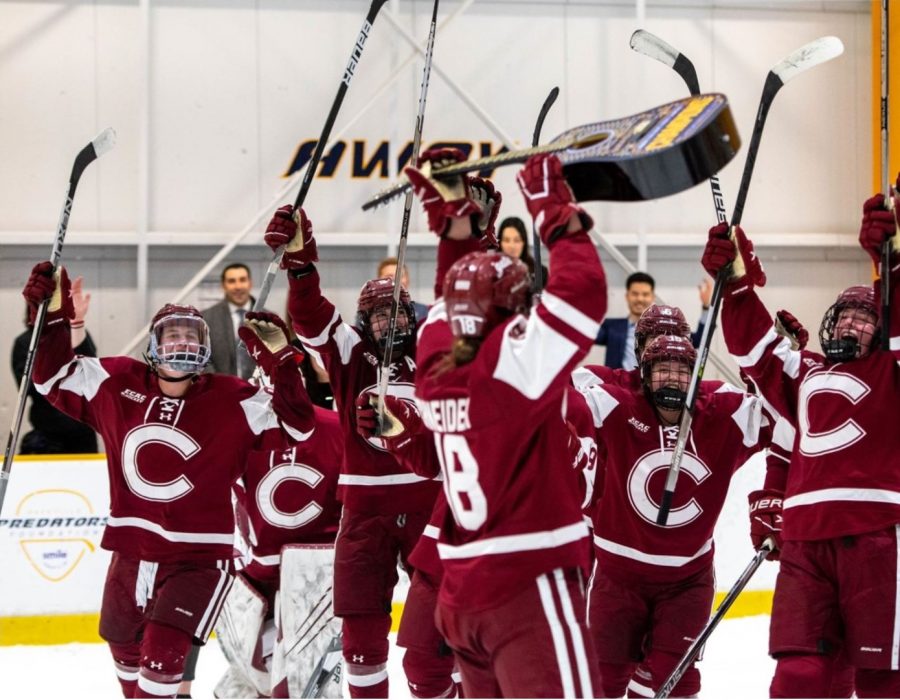 ENDING ON A PERFECT NOTE: After losing twice earlier this season, Women’s Hockey will enter the break with a win over Minnesota and an NCAA Smashville Showcase Title.

Averaging nearly two and a half more goals per game than their opponents, the Raiders boast a stingy defense and a lethal offense. Two players on the Raiders, sophomores Dara Greig and Kalty Kaltounkova, have scored a hat-trick. Junior Danielle Serdachny joins these two as the team’s leading point scorer, leading the team in assists while Kaltounkova leads the team in goals. The team averages nearly double the shots their opponents do, 38.1 to just 19.6.

The team’s main two goalies, first-year Hannah Murphy and sophomore Kalye Osborne, have been strong between the pipes this year. They have combined for a goals-against-average of under two and a save percentage of .900, which is perhaps lower than the team would like but not overly troubling.

While the team struggled heading into the Smashville NCAA Showcase in Nashville, Tenn. coming off a 2-2-1 streak in ECAC play, that wouldn’t affect them once the games started. The team would start with a 2-1 win over Boston College on Nov. 26. The next opponent was one they knew well: the Minnesota Golden Gophers. The team lost to them twice earlier in the year by a combined score of 8-5. This time would be different.

Minnesota came into the game ranked number three in the country, while the Raiders were ranked at number eight. Minnesota had beaten Mercyhurst 4-0 in the first round of the tournament, but Colgate was not about to roll over easily. With Murphy starting in net, the team took the ice.

The Gophers struck first on a power play with a goal from Madeline Wethington. However, it only took three minutes and forty-five seconds for the Raiders to answer, with Kaltounkova finding the net on a power play. Another four minutes and fifteen seconds passed before Kaltounkova struck again, this time at full strength. The third period would see no more goals, as the Raiders came out on top. It was a balanced effort from the Raiders. Murphy made twenty-seven saves on twenty-eight shots, Kaltounkova added two goals, Serdachny had a pair of assists and Greig and junior Allyson Simpson each provided one assist. When all was said and done, the Smashville Showcase title came home to Colgate.

“Being able to beat [Minnesota] in Nashville I think has shown how far we have come as a team since playing them earlier this season,” Greig said when asked about how it felt to get the team’s first win over Minnesota.

“It felt like a playoff game in a lot of ways — the whole weekend did — and I was pleased with how our team stuck together through some of the ups and downs of an emotional game,” Fargo said. “I think no matter what the outcome is, you learn a great deal in these games against very good teams. This win is no different.”

Greig explained what she thought this meant for the team at this stage of the season.

“I think we gained confidence in each other and as a team, but at the same time, we are still hungry to get more big wins like that,” Greig said.

Even the losses before the tournament didn’t seem to bother her much.

“Sometimes you run into a hot goalie. It was definitely a bit frustrating, but I think we all still knew that if we kept working hard in practice and working together that the results on the score sheet would come in time,” Greig said.

When asked how the team planned to make best use of the break, Greig said the team is tired from a heavy schedule during the first half, and are now looking to use this break to rest and heal from any injuries or sickness.

“We haven’t accomplished any of the things we’ve wanted to yet so it’s just a matter of staying focused and hungry for more, while using this recuperation time wisely,” Fargo said. “[The] one part you don’t like [about the break] is that this team is really starting to come together in a good way, chemistry is starting to take shape and the team has really been playing for one another and you hate to lose that momentum.”

The Raiders will hope to keep the momentum going after their extended winter break and continue taking down elite opponents. Their next chance to do so will be Jan. 7 at home on the Class of 1965 Arena against Harvard.