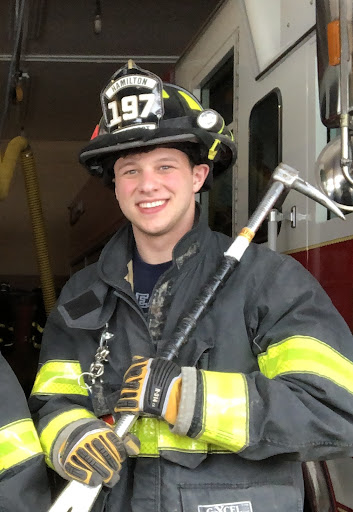 Printed with permission of Nate Freishtat

As seniors look back at their past four years, many reflect on what they’ve accomplished, and senior Nate Freishtat is no exception. Hailing from Maryland, Freishtat has been heavily involved in campus life during his time at Colgate. As a mid and long-distance runner on the varsity Cross Country and Track and Field teams, a member of the Colgate 13 a cappella group, the philanthropy chair and risk manager of the Phi Delta Theta fraternity, Freishtat has extended his involvement to many areas of campus

Freishtat is also involved in the broader Hamilton community. He spends his time as a volunteer emergency medical technician (EMT) and firefighter at the Hamilton Fire Department, which he described as one of his most notable experiences while attending Colgate. Carrying his volunteer experience from high school, Freishtat continued to serve the community as a firefighter and EMT when he arrived at Colgate. This experience meant even more once the COVID-19 pandemic hit, during which Freishtat was able to use his EMT certification to help administer vaccinations at the clinics held on campus.

“Being part of the solution is a really powerful thing,” Freishtat said.

“We would drive out to Cazenovia two nights a week and take class for a few hours,” said Freishtat. “It was a lot of fun, and I made strong connections with the people I was training with.”

Being a firefighter and EMT is not where community service stops for Freishtat. For many years, Freishtat has done volunteer work in Haiti during his summers. He said his connection to the country began after the 2010 earthquake, in which both of his parents went to volunteer as doctors. After some time, they sat him and his brother down and told them that they would be adopting a child from Haiti, his now 10-year-old brother Luke. Because of this, Freishtat wanted to maintain his connection to the country while fulfilling his love of service and learning.
“When you’re in a country like Haiti, you think you’re there to give,” Freishtat said, “but you’re actually there to learn.”

Freishtat said the generosity and culture found in Haiti are unmatched anywhere else he has been. A classics concentrator with a pre-med focus, Freishtat has always known he has wanted to be a doctor once he finishes his undergraduate schooling. He found that his experiences volunteering in Haiti and as a firefighter and EMT have given him invaluable experiences that will help him pursue this goal.

While in Haiti, Freishtat spearheaded a research project about COVID-19 causing sepsis and its connection to human metabolism. With this research, he was published as a co-first author in the International Journal of Obesity in 2021.

When asked what motivates him to spend his time volunteering, Freishtat said that it is the pursuit of knowledge combined with engaging with and serving the community.

“It’s a great way to get connected with things you’re passionate about while helping others and learning,” Freishtat said.

Freishtat looks to continue these acts of service well beyond his time at Colgate. He plans on attending medical school to become a pediatrician after graduation in the spring and is dedicated to a lifetime of learning as a doctor. Expanding medical outreach to underserved communities is particularly important to him, where experiences volunteering in Haiti have only strengthened this resolve. Freishtat can be looked to as an example of someone who has made the most of their Colgate experience by giving back to the community and learning while doing so.