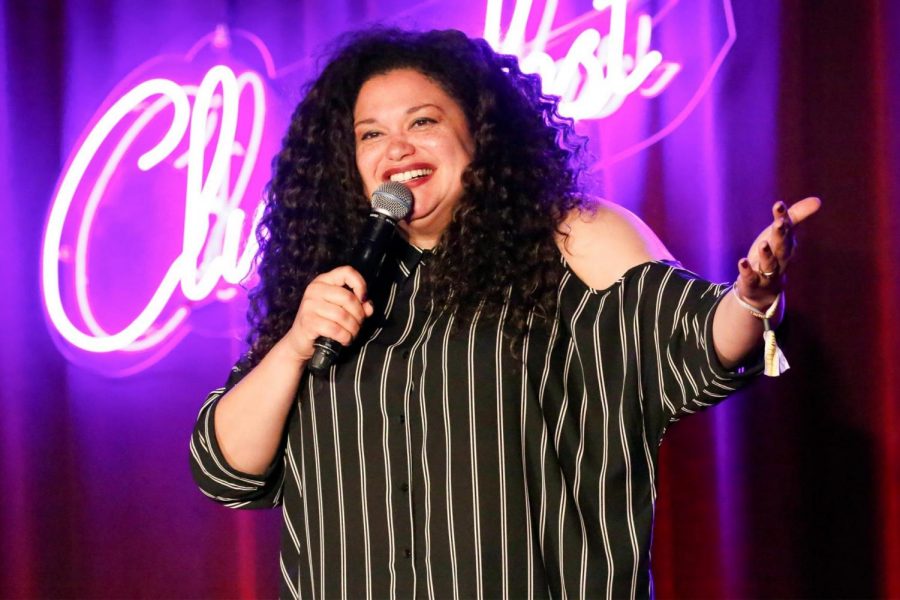 MICHELLE BUTEAU VISITS COLGATE: The stand-up comedian is best known for hosting the Netflix reality-TV show "The Circle" and her many appearances on Comedy Central.

The Colgate Stand Up Club hosted comedian Michelle Buteau on Friday, Dec. 3. She performed at 8 p.m. in the Hall of Presidents, performing a riveting set for the large crowd of students.

Introduced as an “up-and-comer at the Colgate Stand Up Club,” sophomore Jackson Moran opened the show. He joked about going to the Jug, the dynamics of his family and incidents he encountered with cousins over Thanksgiving.

“I was asked to perform the day of so I didn’t have much time to prepare. I spent 10 minutes creating a road map of what I was going to say and thought of different stories and jokes I could tell as I went about my day,” Moran said.

Friday was Moran’s third set, but only his second time being on stage in front of a large crowd. However, his set didn’t appear to have been planned the day of the show, nor did it seem as though he had only performed twice before. His words flowed naturally, making for a smooth performance.

Following Moran’s set, the president of the Stand Up Club, junior Corinna Yee, performed. Yee immediately held a presence on stage, speaking confidently without missing a beat. One of her bits centered around the cultural differences between her and other Colgate students.

She noted that some of her white colleagues get extremely creative when thinking of names to call their grandparents, explaining that some will say, “I’m seeing my mee-maw,” or my “pee-poop” or “pap-pap.” Her first joke set the tone for the rest of her set, which was short but very entertaining. A standout moment from her set centered around her new haircut, which, she joked, will make her “look at [her] shadow and think, ‘that looks uncircumcised.’”

Yee also discussed being Jewish and Chinese and joked about how she has come to view the relationship between her religion and ethnicity.

After the show, Yee said that she has been interested in comedy since childhood: “I grew up watching the TV show ‘Seinfeld’ which was probably my first exposure to stand-up. My family also has a really good sense of humor … I’ve had to train myself to be witty so I could have comebacks for when my parents tease me.”

Finally, stand-up comedian Michelle Buteau, who traveled from Brooklyn, New York to Colgate, began her routine. She is well known for hosting the reality Netflix TV show “The Circle” and appearing on Comedy Central. Buteau directly catered her set to the Colgate student audience which made the show all the more compelling.
She began by saying “This is my first time in Hamilton and definitely my last.” The crowd erupted in laughter as she continued to talk about her impression of Hamilton.

Buteau’s set was centered around COVID-19, sex, her twins and her relationship with her husband. She talked about the struggles of wearing masks, seeing strangers in public during the pandemic and mentioned what she did while in quarantine.

Buteau’s incredible talent in stand-up comedy was more than evident through her impeccable delivery. Throughout the show, Buteau engaged the audience by calling on several students and asking questions about Colgate. A standout aspect of Buteau’s performance was her improvisation skills.

After asking several students questions, she responded with hilarious answers. None of Buteau’s jokes fell flat, and in turn, no student looked disengaged. As the night came to a close, every attendee left smiling.