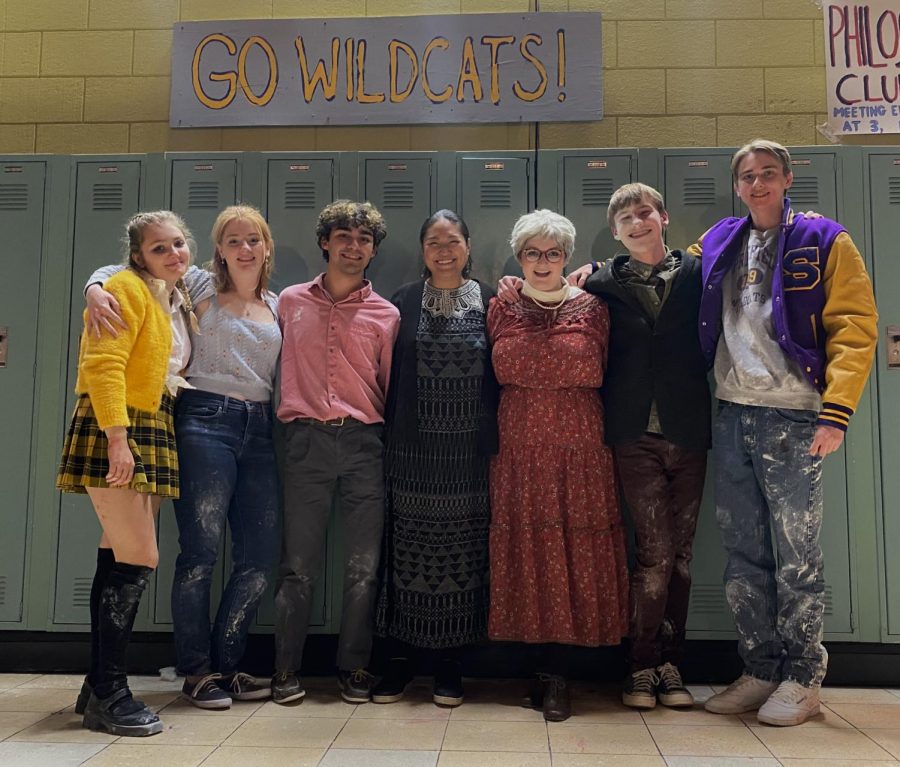 Printed with permission of Lyra Toulon

BLOOD, GORE AND HOMEWORK: The cast and director of “The Juniors” pose after one of their action-packed performances.

Colgate’s Department of Theater presented Noah Diaz’s “The Juniors” at Brehmer Theater in Dana Arts Center from Nov. 12 to 17. Community members had five opportunities to attend the show during its four-day run. The play, directed by Colgate alumna Kat Yen ‘09, starred senior Florence Almquist Checa as Ali, sophomore Max Gardinier as Matt, sophomore Molly Lambert as Lexi, first-year Jorge Rochet as Chris, senior Ryan Ruhl as Nick, and sophomore Katy Selfe as multiple teachers that appear throughout the play. “The Juniors” is a dark comedy that features intense violent scenes against the backdrop of a high school home economics class. The play is a disturbing twist on a normal high school experience with constant switches from dark humor to deeply emotional moments.

The plot features the five students taking part in a “flour baby” assignment, where they are given a sack of flour that they must take care of as they would a real child. The way the characters interact with the “babies” shows the underlying issues of the play, including sexuality, mental health, trauma and homophobia.

The simple set design used the aesthetic of an early 2000s high school, telling the story effectively within an environment familiar to audiences. The costuming was also realistic to the wardrobe of average high schoolers but changed as the play went on. The use of flour was more and more liberal as the show progressed, staining costumes and indicating what the characters had gone through.

The actors did an excellent job in the portrayal of these complex characters. The delivery of their lines was so well done that it made the audience laugh even when there was a bloody dead body on stage. More about the characters was revealed as the play went on, creating deeper and more painful portraits of the students. When asked what aspect of her character, Ali, she found the most interesting, senior Florence Almquist Checa highlighted Ali’s vulnerability.

“She never has a ‘down to earth’ moment because she uses anger to cope with how she feels. She never gets to slow down and talk about her feelings and that leads to violently killing both her baby and her classmates,” Almquist Checa said.

“The Juniors” took on a number of weighty themes, including a unique perspective on violence. Death, specifically through murder, becomes more and more accepted as the play goes on. On the brink of desensitizing the viewers, the play attempted to communicate deeper messages through the use of violence between the students.

Sophomore actor Molly Lambert said she hopes audiences walk away with a greater appreciation for the complexity of generational trauma.

“‘The Juniors’ was a beautiful, new work in progress that allowed us to open the conversation about generational trauma and parenting … and the transition from childhood to adulthood … Each character and scene had intriguing messages, but generating a space for conversation was the most important part for me, whether or not everyone agreed on its reception,” Lambert said.

Gardinier had a different take, saying that he wanted audiences to know that “Queer people always win.”

According to some actors, the play was both physically and emotionally taxing.

“The suicide was very, very difficult for me. The rest of the show was so enjoyable and complex, but the task of getting into character in a way that motivates and justifies the suicide was delicate for me, because of my experiences with that issue in my own life,” Lambert said of her character’s death scene in the play.

Almquist Checa also had some difficulties performing some nights, saying the play “required a lot of stamina.” Despite the challenges of performing this play the actors and crew did an excellent job entertaining the audience while making them consider the extensive, sometimes deadly, challenges of growing up.

“It was all worth it,” Almquist Checa said. “I would do it all over again if I could.”