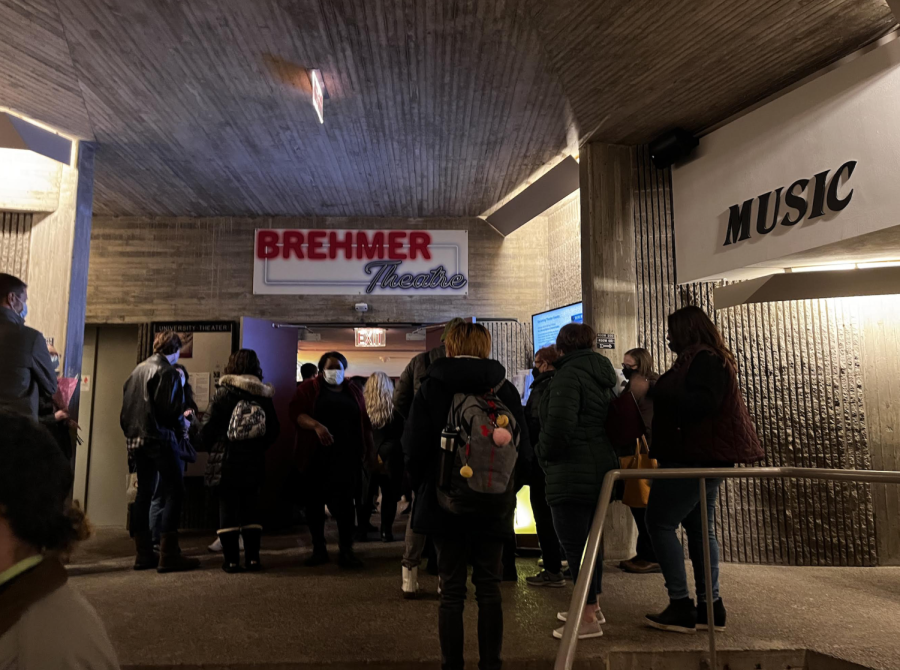 Community members and students performed Jesi Bender’s play “Kinderkrankenhaus” at Brehmer Theater on Feb. 12 and 13. “Kinderkrankenhaus,” directed by Andrew Neisler, focused on neurodiversity in children, and how, in the past, children with mental disabilities were often treated as burdens to society and their families. The play also discusses how “treatment” for these disabilities was based on the study of eugenics. Conditions within the fictional hospital, which mimics real-life institutions from the 20th century, were often abusive and unhelpful towards people with disabilities. The play also offers some humor to couple the more solemn themes.

The limited set design was an interesting aspect of the performance. Instead of a physical set, the performance featured a projector that showed backgrounds, words and other graphics as the play progressed. The projection sometimes showed a jumble of numbers or words, leading the audience to infer that, to some, language and math are not easy to understand or comprehend. It created a bridge between the audience and the minds of those in the play. Sophomore Amanda Anowi, who played a patient in the hospital, spoke on this interesting approach to set design.

“I think it helps the audience understand how confusing the concept of language and grammar can be.”

The play begins with the hospitalization of a girl who the doctors and other patients call “Gnome” (played by Simon Williams). All children within the hospital have “given” names, removing their past identity and linking them to the hospital. Gnome, confused by her new surroundings, befriends a long-time patient of the hospital, Cinders (played by Maxwell Collins), who sees through the flaws of the institution and tries to show Gnome the hidden secrets of the hospital.

Gnome and the other children are monitored by Dr. Schmetterling (played by Ted Lenio), who advises Gnome to learn how to function within a neurotypical society, otherwise, she will never be able to rejoin the outside world. Cinders encourage Gnome to push back against the confines of the hospital and find new ways to communicate. After suffering under the restriction of the children’s hospital, Gnome and Cinders reach the conclusion that they have to destroy the systems that confine them to a neurotypical world and burn down the hospital.

When asked about what she hopes audience members take away from the play, Anowi said:

“The play shows how neurodiverse people are viewed by society as not normal or as people that need to be corrected in some way. When in reality they are just normal people who think differently – and I think the goal was for the audience to recognize that.”

Junior Joey Bluhm, the stage manager, had a similar opinion:

Bluhm also mentioned that there was an effort to cast neurodivergent actors for a number of the roles for the production. Additionally, information about neurodiversity and the history of how disabilities have been treated were included in the show’s program.

“Ultimately, it’s about making space for each other, and the differences inherent to each of us. I hope our audience leaves inspired to ask more questions of themselves, and of each other,” Bluhm concluded.

When asked about her favorite part about performing in “Kinderkrankenhaus,” sophomore Rose Nguyen, who plays a patient called Shadow, said that she, “[enjoyed] working with a group of diverse personalities and backgrounds. There is even a big age gap between some characters, yet the chemistry is still there and we look after each other like one big family.”

“Kinderkrankenhaus“ challenges the stigmatization of mental disabilities and mental illness, as well as the pressure of fitting into a neurotypical society. The performance served as a reminder to treat the neurodivergent with compassion and understanding, rather than as a burden to society, which was a surprisingly popular attitude less than 100 years ago.