Women’s Soccer Ends Season in Patriot League Quarterfinals: The Raiders’ 2-0 Loss to Navy Marked their Final Game of the Fall 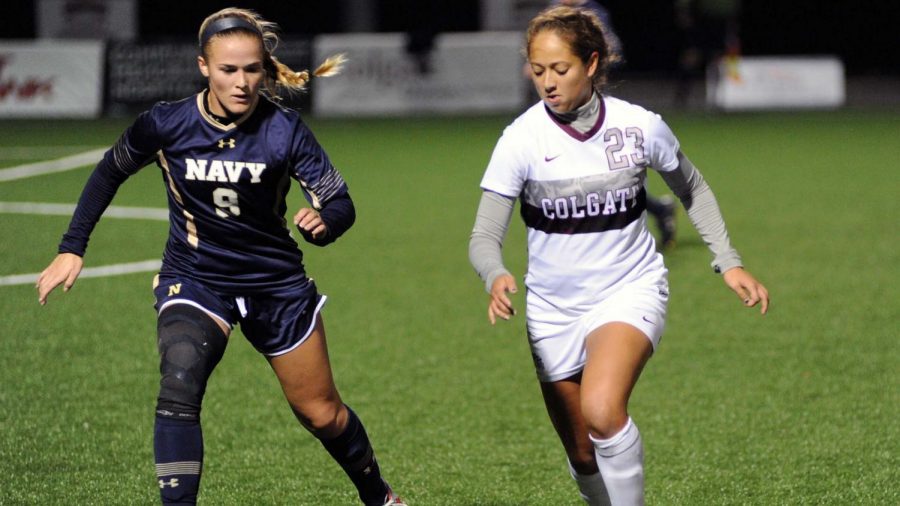 Senior forward Sarah Coy battles against Navy junior defenseman Liza Harris. Coy totaled three shots on goal during the match, but was unable to find the back of the net.

The women’s soccer team took on Navy in the quarterfinals of the Patriot League Tournament on Tuesday, November 1. This postseason matchup marks the end of the road for this year’s Raiders as Navy advanced with a 2-0 victory. The Raiders finished off the year with an even .500 record.

Coach Brawn had high hopes entering this year’s tournament but was not surprised with Tuesday’s result as the game progressed.

“I thought we got outplayed from start to finish today. It’s unfortunate, but you can’t step on the field in the Patriot League Tournament and not be at 100 percent mentally and physically right from the opening whistle. I thought Navy did a great job and was a better team than we were tonight,” Brawn said.

Despite struggling throughout the match, Colgate showed the resiliency and determination that was instrumental in their multiple comeback victories this season against the Mids. The Raiders played from behind for essentially the entire match as the Mids capitalized on an opportunity in the fourth minute. The Navy goal came off the foot of senior defender Cat Macklin, who got possession once she settled the ball after a long throw-in near the corner. Playing from behind, Colgate remained aggressive and worked for multiple quality scoring opportunities. The offensive highlight of the first half for the Raiders came in the 25th minute when first-year midfielder Mara Cosentino’s shot hit the crossbar. Navy relied on stellar play from senior keeper Dayton Wetherby and entered the locker room at halftime with a 1-0 lead.

The aggressive mindset for the Raiders carried into the second half. Senior forward Sarah Coy and first-year defender Dom Demarco both tested the Navy defense in the opening minutes of the half. However, the Colgate offense was unable to get any chances past Wetherby.

Navy tacked on another goal in the 75th minute to push their lead to 2-0 in the final 15 minutes. This did not discourage the Raiders as they continued to fight. First-year forward Abby Sotomayor put a shot against the crossbar in the final minute, proving how hard the Raider squad fought. Unfortunately, it was not Colgate’s day, and the match ended in a 2-0 victory for the Mids.

Tuesday’s game was the final action that this year’s six seniors will see as Raiders.

Coach Brawn praised this group and their impact on the program after the game.

“These seniors don’t walk off the field with the victory we prepared for and wanted so much, but they did so much to help change the culture of this team. They really took us in the right direction. It’s a shame they won’t be able to reap the benefits of it, but they made a big impact all the way through,” Brawn said.

It was an up and down season for the Raiders but the future is bright as a strong core of contributors is set to return for the 2017 season.