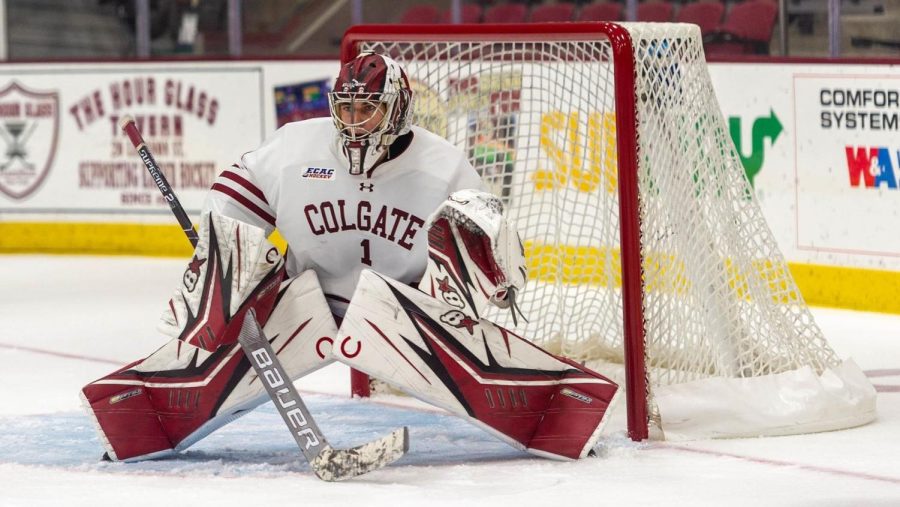 Colgate Men’s Ice Hockey recently began to turn their season around after a losing streak in January. Following two wins against Cornell during the first weekend of February, the Raiders will enter this week hoping to continue their recent successes. They now play away from home against opponents Union College, Rensselaer Polytechnic Institute and Brown University. Against Union, the Raiders scored six goals including two in 20 seconds at the end of the third period to get a win in Schenectady on Feb. 11.

They continued their string of good performances with a victory over Rensselaer 3-2 in overtime on Feb. 12, and finished their road stretch by defeating Brown on Valentine’s Day. The Brown win came in a shootout, sending the Raiders home with the extra point, and a conference record of 7-7-4, putting them at fifth place in the ECAC rankings.

Four of their opening five games in February occurred off-campus against conference opponents, providing a unique experience for the players.

“Playing away is definitely different than playing at home here at Colgate. You have to create your own team energy while blocking out the distractions of the other teams’ fans. Each arena is different, so you kind of have to adapt to the atmosphere throughout each game,” senior forward Josh McKechney explained.

Opposing fans are not always friendly. In an extremely clever display of their intellectual prowess, Cornell spectators even threw toothpaste tubes on the ice during the February game. Fortunately, the Raiders maintained their morale.

“I think we felt far more confident as a collective,” McKechney said. “Winning both games against Cornell was a huge momentum shift in the season. As a team we were more aggressive and knew every upcoming game should be seen as a ‘must win’ since the standings are so close this year in our league.”

That positivity and energy remained with the team throughout the season, even after a few consecutive losses. According to head coach Don Vaughan, the team maintains focus and a sight on their goals.

“Even though the results may not have been what we expected in a few games in January, the guys continued to buy into the process and kept grinding. We actually felt good about the way we were playing and now that we have had some positive results, the confidence grows, expectations rise, and it’s really fun to be at the rink.”

Last weekend, the Raiders had two more games against top ranked Clarkson and St. Lawrence. Both games were not only important for the final standings, but also were familiar opponents for Colgate.

“They were two of the four teams during the COVID[-19] season which we played at least eight times… there was a lot of bad blood and we knew they were going to be hard fought games,” captain and senior forward Jeff Stewart explained.

After losing to Clarkson, the Raiders rebounded with a 4-2 victory over St. Lawrence, putting them in fifth place with a realistic shot to catch Cornell and receive a bye in the first round of the playoffs.

With two more games this weekend, the Raiders have a close fight to the finish, which was unsurprising to Vaughn. When asked about the final push for the playoffs, he said, “We have put ourselves in a pretty good position, but like always in ECAC Hockey the difference between being 4th or 5th and 8th or 9th is usually two or three points. It will be fun.”

Playoffs begin the first week of March, and the team is preparing to finish the regular season strong heading into the tournament, no matter where they end up in the standings.

“In the end, we just have to play good hockey,” Stewart said. “I think we will like the results.”