WMST Spreads the Love with 18+ Bingo 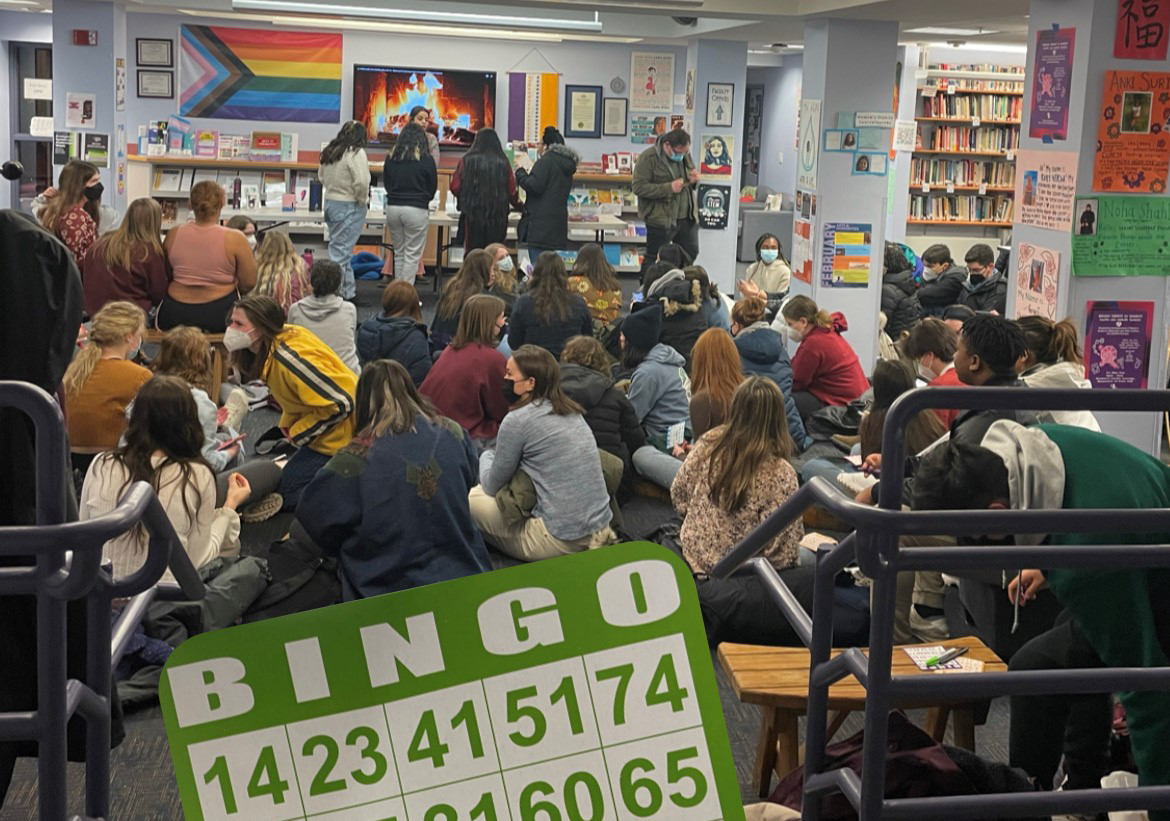 Nearly 100 students crowded into the Center for Women’s Studies to participate in bingo with an adult twist on Friday, Feb. 18. The game beloved by so many elderly people around the world was modified to suit and enthrall a younger crowd. These modifications included risqué and highly entertaining commentary from the events’ three bingo masters as well as an assortment of adult prizes including but not limited to vibrators, lingerie, nipple clamps, and, as Women’s Studies Program (WMST) intern and bingo master August Halbach so eloquently put it, “booty stuff.” All prizes, large and small, were supplied by event collaborators and adult toy vendors Jellywink Boutique and Adam and Eve.

The event had been generating buzz for weeks thanks to the dozens of pink and purple posters that appeared around campus, showcasing cartoon representations of just a few of the potential prizes.

With so many interested students arriving at the Center for Women’s Studies for the event, the space quickly ran out of seating, and students resorted to sitting on tables, sprawling on the floor, or even perching atop the center’s enormous printer.

At the front of the room, bingo masters and WMST interns junior Graci Galvez, sophomore Noha Shahba and Halbach stood behind a table piled high with adult toys of every variety. Projected on a television screen behind the trio, a YouTube video of a crackling fireplace blazed, further contributing to the sensual ambiance of the evening. Like models on “The Price is Right,” Shahba and Halbach held up the prizes one by one while Galvez gave brief descriptions of each.

At first, the audience appeared a bit hesitant to cheer for the items up for grabs and offered only weak clapping and murmurs, but Shahba, Galvez and Halbach quickly remedied this by cracking a few dirty jokes and directing audience members to the colorful bucket of condoms and lubricant goodie bags that were making their way around the room.

“We’re so happy to see such a diverse crowd here tonight!” Halbach said, “and we just want to remind you all that these prizes are for everyone!” with special emphasis on the word “everyone.”

With that, the bingo game began in earnest and the cheers, jeers and laughter that filled the room each time a new space was read off made the enthusiasm of the audience clear. As the game picked up speed, the bingo spaces were deftly renamed with naughty words, and soon everyone had learned to decipher Nuts-33 as N-33, I’m single-17 as I-17, and Boobs-13 (Go ’Gate!) as B-13.

Within the first fifteen minutes, half a dozen prizes had already been handed out. As the prize table became lighter, the tension in the room became palpable.

The only breaks to this tension came when players announced their wins.

“Bingoooo!” cried out one lucky winner in her most evocative voice.

“Bingo” crackled another student’s voice from within a laptop screen. This student had been so excited for the event that he FaceTimed in with his friend marking their board and even winning for him. With this final win from the virtual bingo enthusiast, the first half of the prize table was cleared and the final round filled with grand prizes commenced.

For this final round, the only path to victory was to achieve full board blackout, and students were anxious to begin.

“The only difference between the earlier items that have been won and these grand prizes,” said Halbach gesturing to the remaining prizes, “is that they’re bigger and buzzier.” He added a wink for good measure, and the audience erupted in laughter.

As Shahba called out the numbers for the final prize – “Intercourse-24,” “Ooooo-69,” “G-spot-56” – the room grew so silent, you could hear a condom drop. Then, at long last, the final number, “Boobs-4,” was called, and from opposite sides of the room came two simultaneous shrieks of “bingo.”

Just moments earlier, Galvez had specified that if more than one person were to get bingo at once, they would be “rock, paper, ‘scissoring’ for the grand prize.” Thus, the final showdown began.

In a tense face-off with multiple rematches, paper beat rock at last, and it was over. The obscenely large, ribbed, and vibrating butt wand had been won at last, and the crowd erupted in cheers for the lucky winner.

“Woohoo! Yes, girl!” cried out Galvez, “You came for the self-love, you got the self love! That’s what this is all about.”