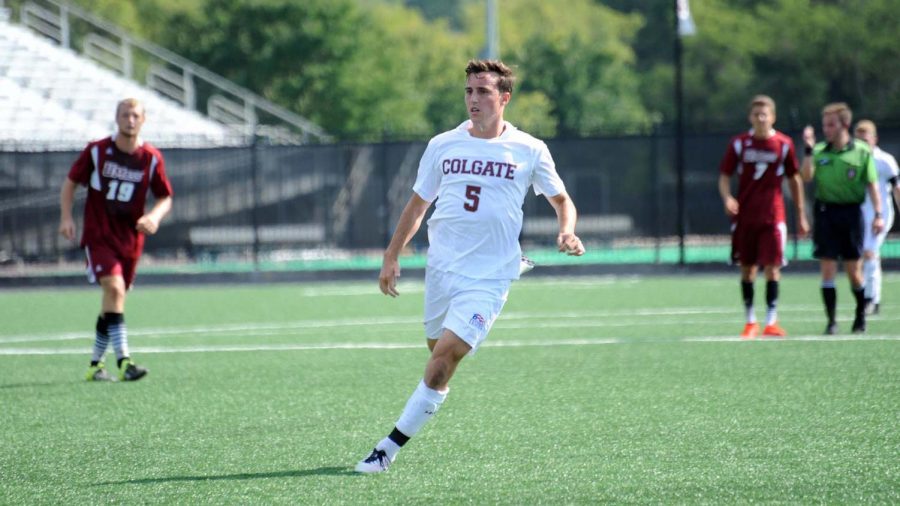 Junior midfielder Jared Stroud stayed aggressive against Lafayette. Stroud managed three shots on goal, one of which got past the goalkeeper.

This past Saturday, November 5, Colgate men’s soccer defeated Lafayette 1-0 in a thrilling match. Junior midfielder Jared Stroud scored a goal in the 88th minute that notched the victory and secured the #3 seed for the Raiders going into the Patriot League Tournament. With this clutch win, the Raiders host a home playoff game on Tuesday November 8 vs. Army West Point. This piece will preview the matchup between these two division 1 powerhouses.

Although Colgate is the #3 seed and Army is the #6 seed, there is very little separating them offensively. In nine Patriot League games this season, Colgate took the most shots with 149 while Army sits behind them with 131. However, the Black Knights were a much more accurate team. They led the league in shots-on-goal with 60 while Colgate lagged behind with 45. This statistic is a prime indicator of a team’s offensive efficiency.

Senior goalkeeper and breakout player this season Ricky Brown will have his hands full if Army continues to challenge in the box. While the Black Knights are a more accurate shooting team, the Raiders’ ability to take shots and repeatedly pressure goalkeepers will be important in their game Tuesday and moving forward. This statistic demonstrates that Patriot League defenses have trouble containing Raider attacks. The Raiders, although not as accurate as the Black Knights, have been able to launch more actual shots at defenses, speaking to Patriot League opponents’ abilities to physically contain Colgate attacks. Physicality will play a critical role in how this tournament game unfolds just as it did the last time these two faced off.

Flashback to October 26. In arguably the most intense game of the year (six total yellow cards were issued), Army pulled out a 2-1 double-OT victory in Hamilton that ended any hope the Raiders would have of repeating as Patriot League regular season champions. This was a stinging loss for the Raiders.

Senior forward Ethan Kutler scored a game-tying goal with 50 seconds remaining in regulation, evoking the magic of last year’s victory against Army that ultimately gave the team the league title. However, the Black Knights flipped the script on the Raiders, scoring the game-winning goal with 44 seconds remaining in double-overtime. This loss was heartbreaking for fans and players alike, but in sports, some of the finest hours come after the darkest defeats.

The Raiders are more than capable of beating the Black Knights. If the

offense can be more efficient with their shots and the defense can minimize Army’s aggressive offensive attach, the Raiders should move on to the Patriot League semifinals.