Inside Scoop on ‘The Booth Review’ 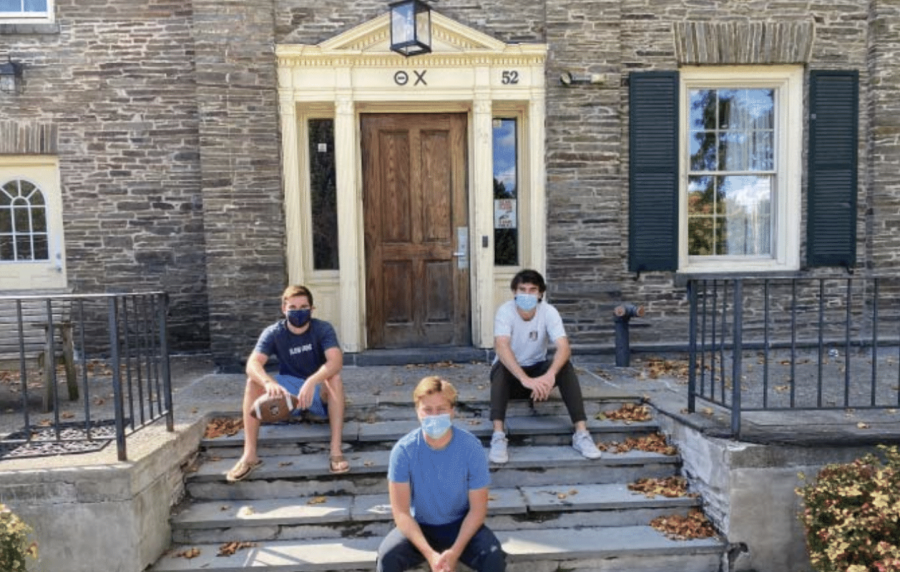 Every Thursday at 12 p.m. on WRCU 90.1 FM radio, you can tune into the Colgate’s sports radio show “The Booth Review,” hosted by three sports enthusiasts, seniors and active Colgate Intramural (IM) League sports participants Cam Cobey, T Brewer and Scott Whelan. However, on air they go by “Cam the Clam,” “Wheels” and “The Intramural King.” If you hear “Roxanne” by The Police playing in the first couple minutes of the show, you will know you are on the right channel.

When these three passionate sports fanatics and best friends are not watching basketball, football, golf and occasionally a little baseball and hockey on SportsCenter, they are reading Twitter headlines about the hottest takes in the sports world. After this, they channel their opinions, complaints and wisdom into animatedly discussing sports on air. They cover the big sports stories from the past week relevant to whatever sport is taking precedent during that season.

The three best friends followed in the footsteps of two of their former fraternity brothers Joe Werthan and Matt Gentile, who both graduated from Colgate two years ago. Cobey starred as a guest on their show when he was a sophomore and was immediately captivated by sports radio broadcasting.

“It’s my favorite thing to do at school,” Cobey said.  “We started it our sophomore year. I’ve wanted to do it ever since I’ve been at Colgate, but I never really found the right guys. So we were kind of like, okay, we talk about sports in our rooms hanging out, so why not do it on air. I want to go into sports radio and I brought along two of my friends. Scott’s a Boston sports fan, like I am, and T just literally knows everything about sports.”

“The Booth Review” has been such a success that the guys have even had difficulty turning down the overwhelming interest people have had to guest star on their show. If you have a burning question for the trio, you can text, Snapchat or Instagram direct message them and they will do their best to answer it. “We always want to do call-ins, but the phone doesn’t work,” Whelan said.

Their radio show has recently been put on Soundcloud and has 22 daily listeners, which includes their fraternity chef, Bruce Hirsch, who is one of their most loyal listeners.

“Chef Bruce plays it on the radio in the kitchen, so the whole house can hear while everyone’s eating lunch,” Brewer said.

“I feel like when we have it structured, we have our best shows. Then I know what to research and if we have more research that just helps your argument. It’s fine if we have differing opinions, we usually do, but when we have stuff to back it up, it’s more fun to go back and forth.”

The time of the year and what sports are in season dictates what “The Booth Review” will be covering for each show.

You do not need to be a diehard sports fan to get some good entertainment out of listening. According to Cobey, his grandma, Heidi Pugliese, listens all the way from her home in Germany and does not know a “lick of sports,” and she thinks the show is awesome. The banter alone is enough to boost morale midway through a stressful school week.

“I feel like we’ve been pretty energetic in our shows this past semester, I think it’s really good there’s three of us,” Brewer says.

Selection Sunday is coming up on Sunday, March 13 for the exciting March Madness college basketball tournament and “The Booth Review” will have plenty to say on this front. Plus the show might even have a guest speaker if everything goes accordingly. Tune in this Thursday at 12 p.m. on WRCU 90.1 FM to listen, keep an eye out for upcoming “The Booth Review” merchandise dropping soon and start making your March Madness brackets now.