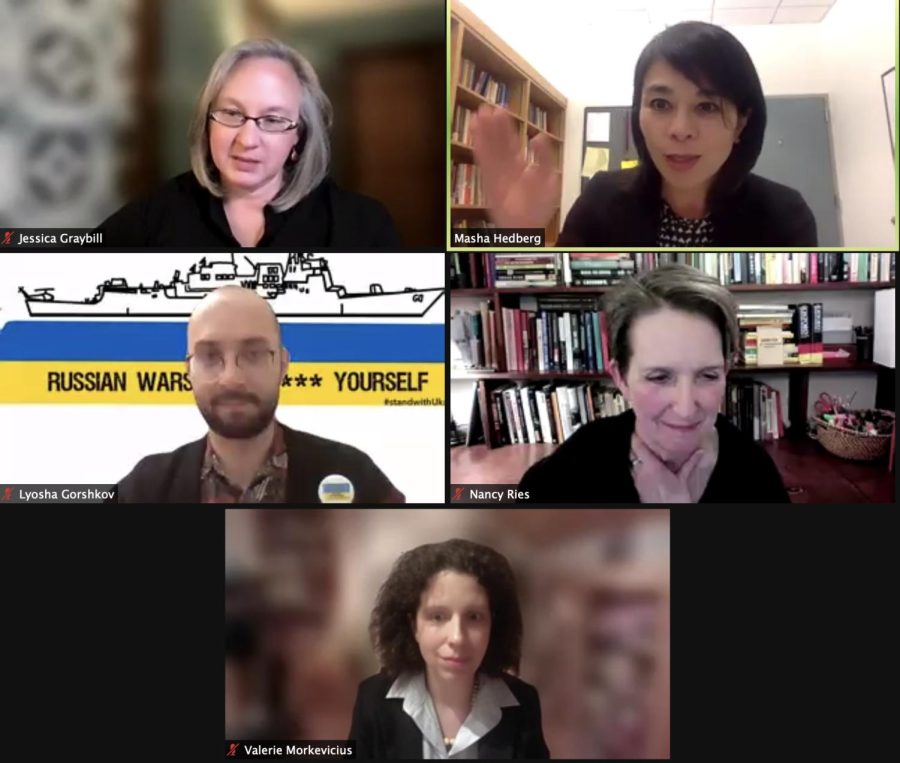 The Russian and Eurasian studies program, in conjunction with the peace and conflict studies and political science programs, hosted a panel titled “Ukraine, Russia and the World: Everything You Wanted to Know But Were Afraid to Ask” on Tuesday, March 1, in light of the Russian invasion of Ukraine.

The panel was organized quickly, as the first attacks beginning the Russian invasion of Ukraine started just six days before the panel on Feb. 24. Panelists recognized the urgent need for discussion of the issue within the campus community as well as the early and ongoing nature of this conflict.

Hedberg emphasized the need for immediate discourse about the ongoing situation, even if the discussion is necessarily incomplete.

“Any analysis [of the conflict] in the moment will be incomplete and that’s how the world works,” Hedberg said.

The panel was directed by Graybill, who set the format for the 90 minute session. It opened with each panelist giving remarks before answering questions during the remaining time. There were many questions left unanswered as the participants were eager to engage with the panelists and students were curious about the recent conflict.

Some of the themes the panelists touched on both in their own comments as well as in addressing questions included the threat of nuclear escalation, Putin’s personal role in the conflict, the popularity of the war in Russia, the use of misinformation and censorship, the possibility of direct U.S. or NATO military involvement and the use of sanctions against Russia.

Following her remarks, Graybill displayed an image of protest within Russia in solidarity with Ukraine, emphasizing that this war is being waged by the Russian government and Russian elites while the general public is suffering under current economic sanctions.

“Students need to understand that the citizens of Russia didn’t ask for this war and they largely don’t know about the war due to a serious crackdown on independent and Western media within Russia over the last week,” Graybill said.

As much as the panelists wanted to inform the audience about the ongoing crisis, they also conveyed larger messages. Gorshkov reflected on experiences as a Russian exile and as an LGBTQ+ professor, defining Putin in this conflict as “an absolute evil that I have never seen in my life.”

“Freedom is not free and we have to be vigilant, not taking our current situation here as an advantage,” Gorshkov said. “The world is fragile and its future depends on our actions.”

Another strong theme echoed by all panelists was the importance and magnitude of this event.

“[This crisis is] by far the most acute crisis that we’ve seen in Europe since the end of the Cold War. It is also a crisis with global repercussions, some of which we’re already starting to feel and some of which won’t become apparent until much later,” Hedberg said.

The panel was advertised across campus on posters as well as on social media. Professors across departments promoted it to their students, including some who offered extra credit to students who attended. Junior Abby Todd received extra credit for attending the event, but also felt that her participation was important for staying informed about the ever-evolving conflict.

“Some people think it’s WWIII and some people think it’ll be solved in a week,” Todd said. “We haven’t been taking Russia as seriously as we should be and we haven’t recognized Putin’s brand of evil in the 21st century. The nuclear weapons threat is terrifying as it breaks so many international norms and non-proliferation treaties.”

In organizing the panel, Graybill hoped to inspire students to think critically about this conflict.

“Think hard about the meaning of this crisis and reacting in any and all humane ways possible is crucial right now and into the future, for Ukrainians and for all of us as global citizens who want peace and not war,” Graybill said.

There are more events occurring on campus to stay informed and engaged with events going on in Ukraine. Todd stated that she attended a candle lighting at the Chabad house in solidarity with Jews in Ukraine, despite not being Jewish herself. More information on events following the conflict and resources for students can be found on the Colgate website.