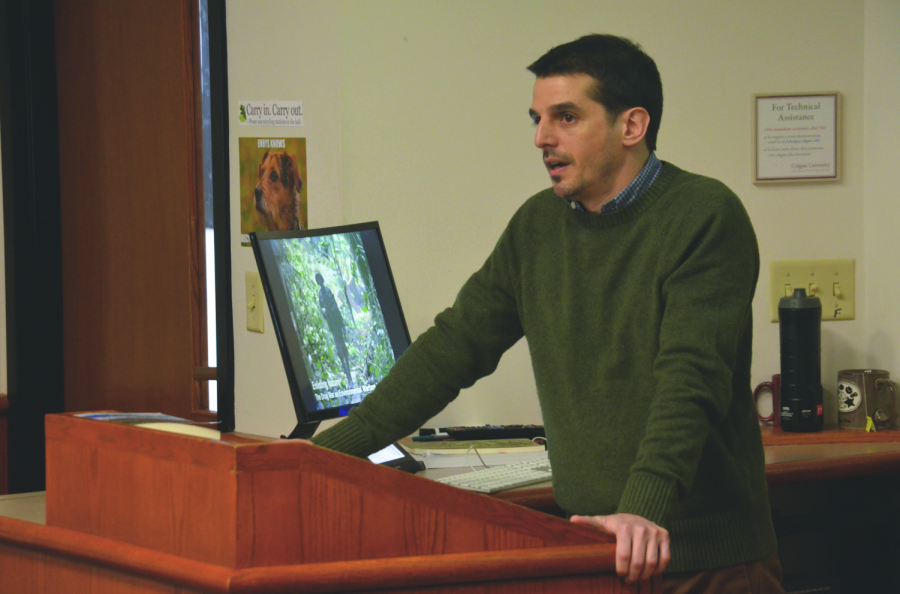 Teo Ballvé was working as a freelance journalist in Colombia investigating an Afro-Colombian community that had been forced off their land by a right-wing, violent militia, when he happened across rumors that the U.S. government had accidentally – or negligently – funded an agricultural project on these stolen lands.

“Effectively, that would be like the U.S. government putting taxpayer dollars in the hands of a drug-trafficking militia and helping them, basically, launder money.”

As it turned out, while the government had not funded this particular project, Ballvé’s yearlong investigation led him to discover that they had indirectly funded a different paramilitary backed agricultural project instead. This very same project became the basis of research that led him to the University of California, Berkeley where he got his Ph.D. in geography.

“When you look back, it seems like everything was a series of calculated intentional sort of decisions that one thing led to another,” Ballvé said. “But it was totally improvised and coincidental and kind of happenstance.”

Ballvé, associate professor of peace and conflict studies and geography, took a rather non-traditional path prior to landing in Hamilton, N.Y. According to his website, his academic research centers around the political ecology of violence and development in Latin America, tapping into his experiences as both a journalist and researcher in the region. Originally from Argentina, Ballvé moved to New York City after graduating from Colorado College and started working as an associate editor for NACLA Report on the Americas, a magazine focused on Latin American politics and U.S. policy.

“I just kind of fell into it,” he said of journalism, a line that seems to exemplify much of his career up to this point.

After getting his master’s degree in journalism from the New School, Ballvé moved to Colombia to freelance as an investigative journalist, his work being published in print and radio outlets including The New York Times, The Nation and The Progressive, to name a few. Since coming to Colgate, his work has included a Fulbright Grant that took him to Colombia, as well as a 2020 book, “The Frontier Effect: State Formation and Violence in Colombia.” This region and its politics are a common thread running through both his journalistic and academic work, whether out in the field doing research or working with students to break down these complicated issues back in Hamilton.

“A big goal [of my research] is to show the futility of the drug war and how counterproductive it is; how it’s destroying communities in Latin America, how it’s destroying communities here at home,” Ballvé said. “The U.S. spends like $40 billion a year on the war on drugs. And for 50 years now, it hasn’t put a dent in the problem, and in fact, just made things worse.”

At Colgate, Ballvé feels that his course, “Criminal Underworld: Drugs, Guns, Bodies,” best aligns with his research interests, making it the “most exciting” class for him to teach. The class is cross-listed under both the peace and conflict studies and geography departments, a combination mirroring the interdisciplinary nature of his academic and journalistic pursuits.

“Their enthusiasm for the topic is really kind of infectious,” he said of the students who take the course.

Ballvé is currently working on a new project in Colombia about “the ways in which nature is being used as both a weapon of war and a tool for peace,” and he hopes that his next book is less academic in nature and more accessible to a broader audience. His openness and adventurousness seem to remain a driving force behind his work as he ponders his next endeavors, an attitude he thinks students ought to adopt as they go out into the real world – particularly in the face of pressure to pursue a higher degree right away.

“The way I fell into journalism and the path that it put me on was completely serendipitous and unintended, and I discovered this thing that I ended up loving that became the focus of my work,” he said, “but then I never would have discovered it if I had gone to grad school right after college.”

In his advice to students, Ballvé emphasized the importance of exploration and experimentation — both personally and professionally.

“I know what it looks like out there. Colgate students feel like they have to have everything figured out, and a path, and that’s just not the way things happen out there in the real world — and that’s a good thing.”