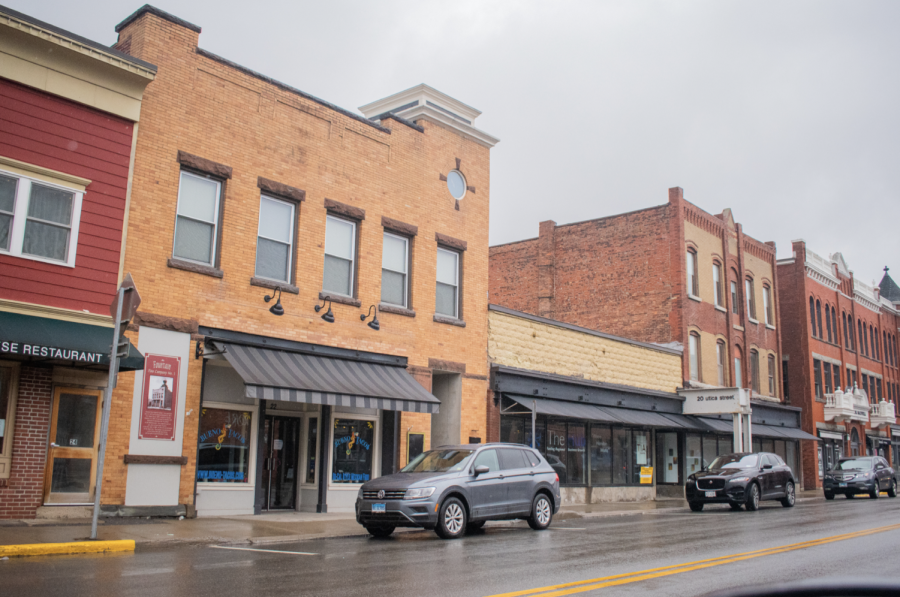 A new, 88,000 square foot, four-story mixed-use development has been proposed for the Village of Hamilton at the crossroads of Madison and Utica Streets in the center of downtown Hamilton. The project, spearheaded by the Hamilton Initiative, would bring 11,300 square feet of retail space and 39 apartment units on the upper three floors.

A 48 page report produced by Passero Associates, an architectural engineering and design firm based in Rochester, N.Y. outlines the project background and provides floor plans of the proposed structure. It was presented to the Village of Hamilton Planning Board in December.

The initiative is responsible for many recent business partnerships in the village ranging from the Palace Theater to SWANK, the popular home goods store and design consultancy. In 2002, the Hamilton Initiative moved the Colgate Bookstore into its current downtown property at the intersection of Broad, Lebanon and Payne Streets.

This newest project is a four-story row of buildings that wrap from the current site of The Hub (home to Colgate’s TIA Incubator) behind the buildings housing Fojo Beans and Colgate University’s Office of Advancement and over to the parking lot adjacent to Hamilton Massage Therapy and Martha’s on Madison. The site will add retail and commercial space to the ground levels with studio, one and two bedroom apartments on the floors above. Covered parking will also be available on-site and the Hamilton Initiative has also proposed public and reserved parking to take the space currently occupied by the former Wayne’s Market.

In order to accommodate the new space, the existing buildings will be reconfigured and reconstructed to maintain the historic downtown’s aesthetic identity. The report shows a proposal for the redevelopment of two separate sites. “Site A,” labeled the Village Core site, will house the main structure at the intersection of Madison and Utica Streets with 37 garage parking spots. This new space would stretch retail and build residences above existing spaces occupied by tenants such as The Hub and around favorites like Martha’s on Madison.

“Site B,” which is currently occupied by the vacant and deteriorating former Wayne’s Market on Eaton Street will be home to 105 parking spaces for residents of Site A and for “the general public,” according to the report.

“I am surprised there is really high demand for high-income housing, especially given most of the housing downtown is older-build student housing. I am very interested to see how this affects the downtown community because I’m not sure it’ll fit with the dynamics of downtown Hamilton right now,” senior Isabel Lariño said.

The buildings have been designed to visually complement existing structures while adding contemporary, industrial details such as steel accents and awnings according to project descriptions.

The segmentation of the building along Utica Street creates a row-style design that replicates the existing historic mixed-use development pattern which includes a remarkably intact, turn-of-the-century commercial district outfitted with brick row buildings, and a collection of well-preserved 19th and early 20th century buildings, the report said.

The façade, specifically the side that opposes the Colgate Inn on Madison Street, has detailed elements such as zinc paneling to add a contemporary flair while also using iconic features seen throughout older Hamilton structures such as the PVC Victorian railings seen on Hotel Maxwell.

“Special attention has been paid to building materials, ornament, and hierarchy to respect the existing historic building stock while also responding to contemporary building needs. Conceptual designs call for a mix of both contemporary and historic materials,” the report said.

The first floor of the project will hold the Partnership for Community Development offices and Colgate University’s Thought into Action (TIA) Incubator. This will include a “co-working space, a makers’ space, a commercial kitchen, and the Hamilton Market (a shared market for local artisans, services, and others seeking small spaces downtown),” according to the funding application.

The first floor of 22 Utica St. will be developed as a ready-to-lease commercial space. Finally, above these developments, there will be three floors of and two bedroom apartments “meeting the needs of area professionals,” according to the application. These apartments will also have access to rooftop common spaces and club lounges.

Colgate University President Brian W. Casey reflects that this development has been designed with the needs of certain types of faculty, staff and professionals in mind.

“These are one bedroom or studio apartments for visiting professors and coaches. These are not for alumni and these are not for students. This is 100% for librarians, staff, workers and visiting professors. It’s really that we’re just desperately trying to answer the [short-term] housing needs,” Casey said. “It is for faculty, staff, teachers and those who work in the hospital.”

The Village Core Mixed-Use Development Housing project is currently under review by the Village of Hamilton. The project has to meet the review standards of the Hamilton Housing Strategy (2018), a study outlining challenges in the village, and be visually compatible with the surrounding buildings in the village.

Mayor of the Village of Hamilton Ruthann Loveless told the Utica Observer-Dispatch that the project would bring much needed residential space to the village.

“I think it is a terrific project,” Loveless said. “We have 2,000 people who work in the village and leave every day at 5 p.m. because they can’t find housing here.”

Senior Crinny Woloson notes that multiple Colgate professors have shared stories with her regarding the difficulties of finding affordable and adequate housing within the local area.

“I have had multiple professors who commute to class daily and one professor that is even forced to get an Airbnb during the week. I think the new housing will provide diverse options to professors who cannot currently find places to stay in Hamilton,” Woloson said.

The university has constructed a neighborhood of new single-family homes off of Lebanon Street above the Southern Madison Ambulance Corps (SOMAC) station in a further attempt to address the housing shortage of modern, more move-in ready options.

“Most of the current housing stock available in the Village is old, outdated, and undesirable,” according to the project proposal. “While lower-income renters get priced out of the housing market in many cases, middle- and higher-income renters go elsewhere to seek more up-to-date and contemporary housing options for the same price point. This has created a situation where many who do business in the Village commute up to 30-45 minutes from other affluent areas of the region.”

The project attempts to create more living options in the town to design a walkable living community. “The Village Core Mixed Use Redevelopment project aims to combat some of these issues by creating new, contemporary, and desirable market-rate residential units in the Village Core that will appeal to middle- and higher-income earners. The goal is to provide desirable housing options that will benefit the entire community and strengthen and catalyze the Village Core,” the project proposal states.

Loveless added to the Utica Observer-Dispatch that there will be benefits in lowering the number of employees who commute to and from Hamilton each day.

The Planning Board met again on March 24 to continue its review of the project. A verdict has not yet been reached.