The Colgate Maroon-News • May 6, 2022 • https://thecolgatemaroonnews.com/37268/bakers-dozen/and-now-presentingshock/ 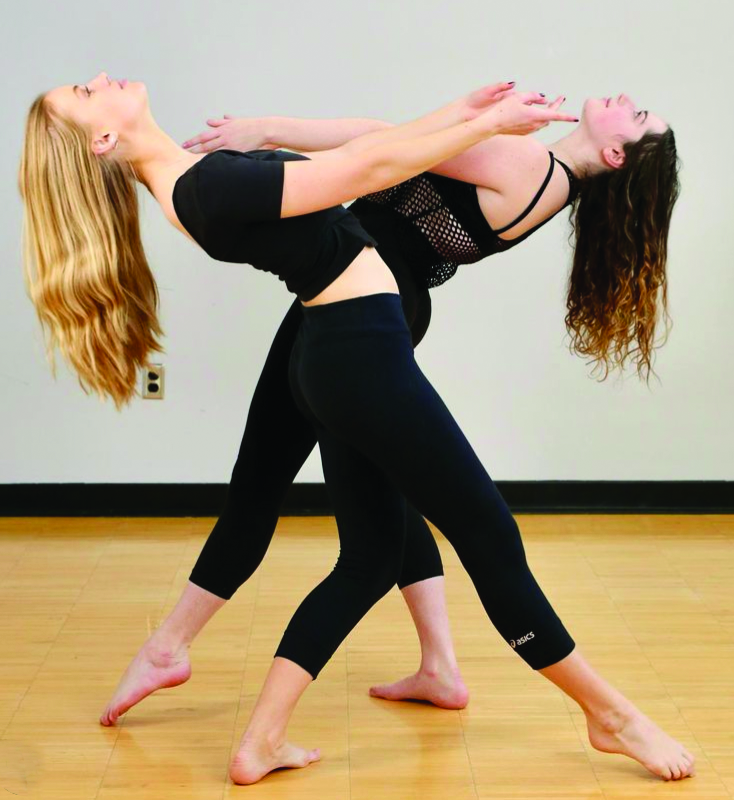 The lights of the chapel slowly dimmed as the Shock dance group members filed onto the stage to the roar of the audience members at Dancefest. Prior to the “Mamma Mia” soundtrack mashup starting, the de-facto theme of the night, the lights returned and the group was given a round of applause. Shock traditionally closes the Dancefest program because of the size of the group, but this closing felt different. An aura of resilience and hope enveloped the stage members and their audience. This final performance of the program marked the closing of an otherwise tumultuous past year through uniting the Colgate community for a shared experience of joy. Who better to take on this role than Shock?

Though the history of the group is not entirely well-known, the group was started by a former Colgate student years ago who wanted to create an all inclusive dance group. Shock co-leader Rachel Dames is a senior concentrating in political science and writing and rhetoric. Dames has been part of Shock since her first year. Having danced since she was three years-old, she immediately gravitated towards Shock for its contemporary dance genre and all inclusive quality.

“[Shock] has given me a community of people who also love to dance and want to continue doing that throughout college,” she said. “It [has connected me with] friends in and out of dance, especially [those of] different ages. It’s definitely been a good way to connect with people that I don’t have a shared major with or similar clubs or people whom I’ve never really talked to before,” Dames said.

Co-leader Madeline Graham is a senior concentrating in Italian studies and art & art history. She started dancing when she was five years-old and decided to continue this passion at Colgate through Shock. She emphasized this group’s ability to make every member feel a sense of belonging.

“When I was a [first-year], I didn’t really know anyone. It can be intimidating to put yourself out there and … for people who have never danced, coming into a studio space can maybe be intimidating,” she shared. “But from the beginning, all of the leaders always had the mentality of wanting to make [Shock] a fun space. We always play upbeat songs to [help us] kind of forget about whatever happened that day. … You have a moment to kind of escape and think about yourself first and be with people who really want to be there too.”

Members are all enthusiastic to be a part of this group, whether Big Shock or Small Shock. The smaller group (i.e. Small Shock) is audition-based, while Big Shock is open to anyone on campus. The group is generally composed of dancers with more of a dance background and often performs a contemporary/lyrical style piece. Big Shock’s dance piece is normally a medley of different songs that revolve around a common theme.

“Big Shock gives an atmosphere to people who have always wanted to dance but never had the opportunity to try it,” Dames explained. “[Big Shock is] a welcoming environment where no experience [is] needed. Anyone can really just walk in and dance. We really cater it to people who have no dance experience. We go through everything very slowly and none of the moves are super complicated.”

Shock member Valerie De Leon is a senior concentrating in biology, sociology and global, public and environmental health. She first joined Big Shock the fall of her sophomore year and again this semester. DeLeon remarked on the group’s ability to provide a comfortable, encouraging space for students to take a break from work and enjoy themselves.

“I feel like it’s hard to get out of the mindset of just doing work. Shock is nice because it’s not like it’s a huge commitment. You’re spending an hour a week at rehearsal. … It helps us de-stress so much,” DeLeon shared. “I remember during one rehearsal … I was in such a horrible mood. But as rehearsal went on, I kind of forgot about what was going on and was able to recuperate and center myself and think about the good music, the dancing and all of the positivity that everyone around me radiates. I felt so much better after [that] rehearsal.”

Every Dancefest, Big Shock chooses a theme whereas Small Shock chooses one lyrical song piece for their routine. Graham remarked on the importance of setting themes for the Big Shock group to inspire unity and facilitate greater bonding since many may not know each other personally.

“Pretty much every decision that we make, we always try to include all perspectives. Even with costumes, pictures, different songs, we always try to ask [the group] because we’re here for that. … We want it to be an enjoyable experience for everyone and [everyone] loved the theme of ‘Mamma Mia.’”

For both Dames and Graham, this group has provided them a space to grow personally and inspire others. As they prepare for graduation soon, the two remarked on how this group became a family for them and their hope for its continued success in the future.

“I feel like it has a certain presence on campus,” Graham expressed. “It’s a very powerful dance group.”

Dames agreed with Graham’s thoughts about the power Shock holds in inspiring students from all backgrounds to dance.

“I just hope that it continues to be a place where people are excited to try dancing and feel good about themselves,” Dames shared. “I don’t know what the future holds. That might be the last time I’m ever dancing on a stage in front of an audience. … I’m really happy I’ve gotten to be a part of [this group].”