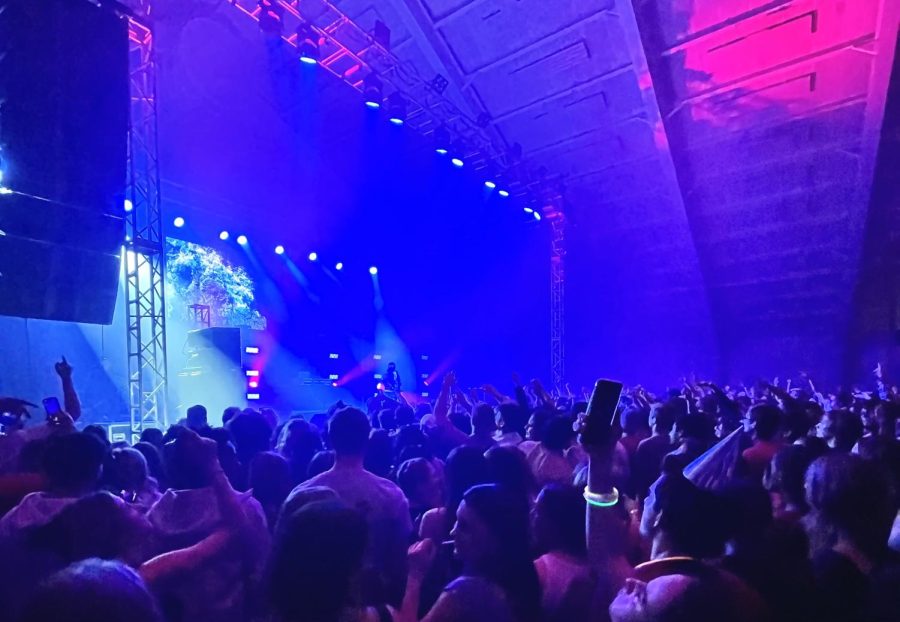 On Saturday, April 30, T-Pain and opener Bryce Vine brought their smash hits to the Sanford Field House for the night. With doors opening at 8:30 p.m., over 2,000 students crowded into the field house up to an hour in advance and clumped in mosh-pit formations until Vine’s entrance at 9:30 p.m. As Vine got on stage, he was greeted by a sea of cowboy hats, crop tops, eye gems and body glitter.

To kick off the performance, Vine began with his 2021 hit, “Blame It On Me.” Featuring several beat drops, the song quickly caused the crowd to devolve into a frenzy of jumping, bumping and shoving.

Vine worked the crowd like a pro, making eye contact with audience members, mirroring their dance moves back to them, and calling out starstruck audience members individually to pay them compliments.

“I see you with your cowboy hat. I love that!” exclaimed Vine to one girl balanced precariously on her friend’s shoulders in full cowgirl attire.

Vine also ingratiated himself to his college audience by playing into the SpringFest mentality of partying till you drop:

“How are we feeling tonight? Is this Saturday or Sunday? Hell, yeah!”

Vine’s crowd work did fall short when he confused Hamilton with Syracuse, but he won the audience back by complimenting Colgate’s minty fresh name.

“I like y’all,” said Vine, “and I knew I would too because Colgate is my favorite brand!”

As Vine performed, students tossed all manner of things onstage including tiny liquor bottles, condom water balloons and even one student’s entire wallet.

Ever the gracious performer, Vine took everything in stride, kicking aside the unorthodox water balloons, returning the wallet and drinking the tiny beverages.

“Colgate, you guys are making the 5 a.m. flight this morning so worth it,” exclaimed Vine before slamming a Pink Whitney drink.

For his final song of the night, Vine played his 2014 hit “Sour Patch Kids” and the audience roared in approval, chanting his own lyrics back at him.

With one last, “Thank you, Colgate toothpaste,” Vine raced off the stage, leaving students to catch their breath before the next big performance from T-Pain.

During the brief intermission, students flocked to tables set up at the opposite end of the fieldhouse covered with all manner of concert fuel. By the dozens, cupcakes, Subway sandwiches, pizza slices and all varieties of fried food were scooped up to act as both nourishment and new and interesting projectiles to toss around the venue.

However, these games briefly came to a pause when Colgate junior and event coordinator Marco Greico took to the stage to reprimand students.

“If you want the show to go on, there can be no more throwing of anything on stage and no more people on shoulders,” scolded Greico. “If you don’t stop, you can’t have T-Pain. He’ll have to go,” warned Greico to a chorus of boos. In spite of this warning, the moment the stage lights rose, so too did students rise onto swaying shoulders and mozzarella sticks rise into the air.

The moment T-Pain took to the stage, he brought full energy and made every moment count. First, launching into four of his biggest hits and remixes, “Booty Wurk (One Cheek at a Time),” “Black and Yellow,” “Cyclone” and “2 Step” in quick succession. No song received more than one minute of performing time which kept the audience and T-Pain himself in a state of constant energy and engagement.

The graphics playing behind T-Pain throughout the concert took the performance to another level, both odd and enthralling. Some projected dizzying wormholes that caused the already unsteady audience to sway back and forth. Others truly put the “graphic” in “graphics,” depicting everything from rubber ladies smacking into each other and exploding to post-apocalyptic wartime imagery to an alternative reality in which the audience was composed entirely of butts.

One song that captured the attention of all, even those at the food tables in the very back was “Up Down (Do This All Day).” Before the song even began, T-Pain called for his sound manager to “Turn it up!” and the entire venue began to shake with the bass. As T-Pain sang “Booty going up… down,” the audience followed his commands going from tiptoes to crouching over and over again. Even the students sprawled on the turf toward the back of the field house got in on the action, raising and lowering their Subway sandwiches in time with the lyrics.

“Awe man. I love it so much. Thank y’all so much for messing with that song,” said T-Pain appreciatively after he had finished. “Negative vibes will never ruin my day. I’ve struggled with depression and all that, but now I’m feeling the best I’ve ever felt.”

Gradually, the audience began chanting T-Pain’s name in support until “T-Pain” was all that could be heard.

As the cheering continued, T-Pain scanned the audience for a moment, perhaps taking in the love, until his gaze fixed on two audience members holding aloft a sign that simply read, “I’m On a Boat.”

“You, there with the poster,” said T-Pain, pointing to the pair, “I respect your hustle. That song is hella weird, but I’m here for it.” Without missing a beat, T-Pain then launched into the Lonely Island parody song about, you guessed it, being on a boat.

First-years Ismaaeel Abdur-Rahmaan and Daniel García were the sign holders in question and were absolutely starstruck to have been acknowledged by T-Pain himself.

“We brought the poster largely as a joke with only the slightest hope that T-Pain would see it. Then, when T-Pain started talking about us and the song actually came on, it was probably one of the best moments of our lives. I’m [not] sure how we’ll ever top it,” García said.

As his final song of the night, T-Pain reminded the audience of his greatness by performing a remix of DJ Khalid’s “All I Do Is Win” accompanied by a rapid-fire photo reel of all the times that he has “won” as well as graphics of booties, flames, diamonds and chains for good measure. To really send the point home, one final message blazed on the screen announcing, “And the winner is … T-PAIN!”

To conclude the concert, T-Pain left the audience with a few words of inspiration, “Keep a positive vibe, y’all” said T-Pain. “Haters will try to take your vibe, but don’t let them.”

As the students in the mosh pit dispersed for the first time in more than three hours, an expanse of smashed snacks and skittering mini-bar bottles were exposed from beneath them.

“I reached my peak this weekend,” first-year Charlie Hobin said. “This has been the best time of my life.”