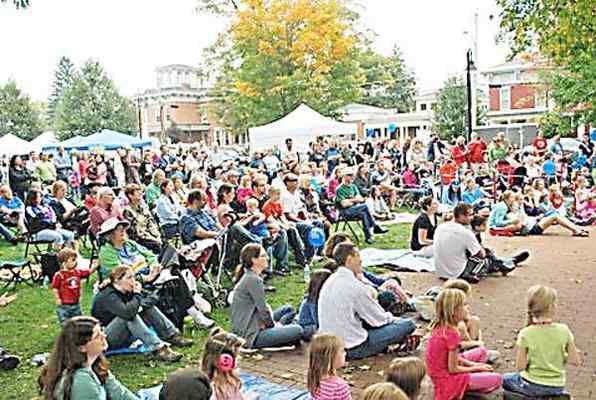 NOT SO GREAT: The Great Chocolate Wreck Train Festival used to draw in large crowds, as pictured here. Entrepreneur Art Zimmer hopes to improve it.

carrying Nestle Crunch Bars derailed in Hamilton. No one was killed, but many suffered from toothaches in the following weeks due to the consumption of accidentally unloaded chocolate. Fifty years later, the Chocolate Train Wreck Festival was established by the Hamilton Partnership for Community Development (PCD), an organization designed to facilitate economic development. However, in recent years, PCD decided to allocate funds elsewhere, so the festival ceased to exist. Wreck lore aficionado, entrepreneur and owner of the land where the train derailed, Art Zimmer, continues to commemorate the incident by giving historical tours the same weekend Good Nature Brewing annually releases their Great Chocolate Wreck beer.

“We keep it going, but just on a real small scale. It cost money to put that on, [and] there was no admission fee, so it lost money,”

Although the festival used to draw in hundreds of spectators hoping to find free chocolate, the toned down celebration still brings in an eclectic group of individuals eager to learn more about Hamilton and enjoy the chocolate pairing with the beer flight at Good Nature Brewery. The tour took off from the brewery at 2 p.m. on both Saturday, September 24 and Sunday, September 25. Zimmer led participants on a 15 minute walk through downtown Hamilton pointing out historic buildings like the old train depot that was dragged further down the track by a team of horses to accommodate the town’s need for the space to rectify a bigger building.

Of course, Zimmer also took the time to explain the rich and somewhat

speculative history behind the train wreck. In the 1950s when the wreck occurred, everyone in town heated their homes with coal that was brought in by train and unloaded into trucks that sat underneath a diverted set of tracks near the depot. Under normal circumstances, the engine operator would slow down a mile or two in advance so that the train could safely maneuver onto the diverted path, drop coal into the beds of the waiting trucks and then safely get back onto the main tracks.

However, on the day of the wreck someone jimmied the switch and sent a train that was going full speed down the diverted train tracks. The operator was unable to slow the train down enough to navigate the new path, so the train toppled over and spilled thousands of candy bars. Thankfully, the four people on board survived the wreck with relatively minor injuries, so the unfortunate incident is celebrated because of its memorable and delicious cargo. To this day, no one is sure who sent the train flying down the

Still, many people miss the larger festivity. Good Nature Brewery and Zimmer hope to revive it. Zimmer is laboring on his own to clean up the wreck site so that the remaining track’s aesthetic is more reminiscent of its 1955 self. Meanwhile the Brewery is well on its way to finishing their new building that is located adjacent to the townhouses. As part of the new brewery, they’re building an event center that can host celebrations like the

“The steel is up, the roof is on, the walls are in,” Zimmer said. “It’s a million dollar brewery. It’s a big operation and as part of the new brewery, they’re building an event center. We’ll keep this little celebration going on the small scale, then build it back up to a big deal in the new event center.”