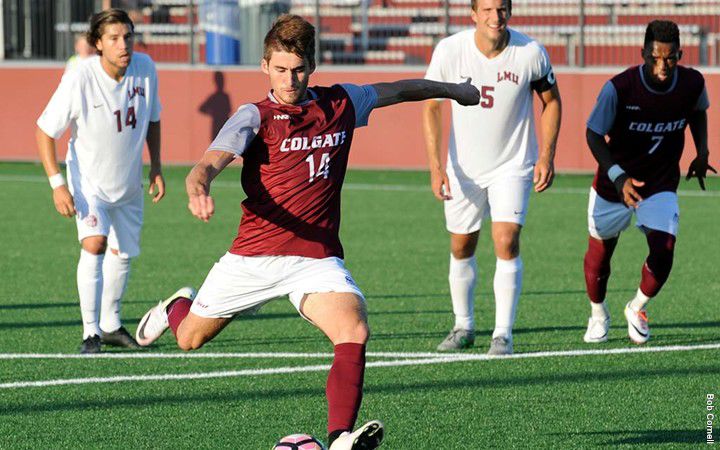 Colgate Men’s Soccer kicked off the season perfectly in tournament play this weekend, securing two victories against both Loyola Marymount, 1-0, and University of Massachusetts Amherst, 2-0.

Friday evening the Raiders started the Central New York Classic with a match against Loyola, who controlled the possession of the ball throughout the majority of the first half. Despite their dominance, Loyola could not break down the Colgate defense. It was a physical half, and both teams were given yellow cards. Loyola’s junior defenseman Griffin Bell was shown the first yellow of the match in the 20th minute. Junior defenseman Bruno Scodari was then given a yellow for Colgate five minutes later.

With 12:55 remaining in the first half, sophomore forward Uye Omorogbe drew a foul in the box, earning the Raiders a penalty kick. Senior striker Ethan Kutler slotted the ball into the bottom left corner. The rest of the half passed without goals. Loyola responded early in the second half with a free kick that missed narrowly wide right of the Colgate goalpost. The Raiders created another opportunity on a free kick later on and barely missed doubling their lead with a shot that passed just over the crossbar. The final score was 1-0, a hard fought victory for Colgate.

“We’re pretty lucky having a veteran group this year. This group of seniors, they’ve been through a lot together and they’ve really set the tone,” Ronning said. “They are really leading the team this year and setting a tremendous example for the younger players.”

The seniors and returning players were not the only ones to lead on the field this weekend. In Sunday’s match against the University of Massachusetts Amherst it was a combination of Kutler and first-year midfielder Kentaro Morrisson that put the Raiders in the lead.

The game began with strong possession from Colgate, building their play from the back and breaking down the Minutemen’s defense with precision passing. Their first shot came in the sixth minute from Omorogbe on a tight angle from the right side of the goal hitting the outside of the side netting. The Raiders would go on to test the Massachusetts goalkeeper a total of five times in the first half with nine total shots five of which were on frame.

The goals did not come until the second half, despite Colgate’s dominance of the ball and outshooting the Minutemen 9-4 in the first half. The first goal came from Kutler with 26:43 remaining in the second half on a shot that was blasted into the top of the net from just outside the left side of the six-yard box. Morrisson scored his first goal for Colgate with a shot taken from just outside the left corner of the 18-yard box. Kentaro guided the ball into the top right corner of the goal, curling the ball out and over the goalkeeper.

Coach Ronning reflected on the 2-0 win.

“It’s a great start to the season, but when you analyze the games moving forward we have a lot to go,” Ronning said. “You can always play better or faster and I think the wins are a reflection of the focus our guys have on the process and coming out every day and working really hard.”

The Raiders travel to face Syracuse University on September 1 at 7 p.m. and hope to continue their current win streak.