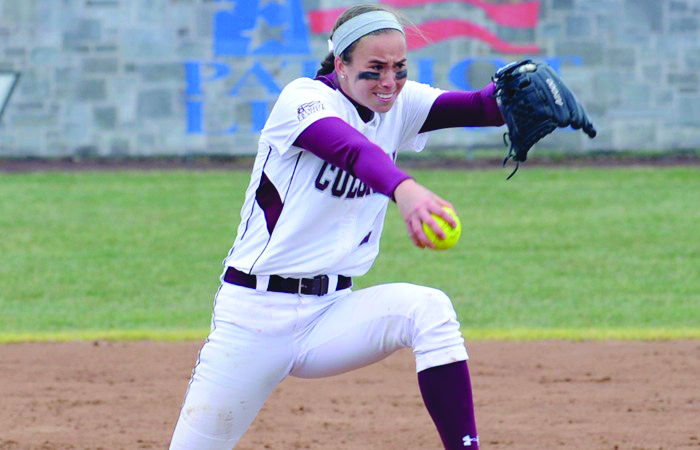 Senior Brigit Ieuter registered a win and loss for the Raiders against the Black Knights; the third game in the series was postponed.

This past week, the women’s softball team stayed busy as they hosted the University of Albany Great Danes on Wednesday, and continued to defend their home turf on Saturday when facing off against Army West Point in a challenging doubleheader. The Raiders were unsuccessful in their Wednesday campaign and came out of their doubleheader with both another win and a loss under their belts. At the weekend’s close, Colgate improved their overall record to 4-16 and 1-1 in Patriot League Play.

Wednesday’s game began with senior Brigit Ieuter on the mound for Colgate. The competition’s first three innings remained scoreless, until the visiting team put a run on the board in the fourth inning when junior catcher Elizabeth Snow hit a homer to center field, driving in an RBI and getting the ball rolling for the Great Danes. Soon after, first-year outfielder Sarah Petzold widened the visiting team’s lead when she notched two additional RBIs on a single to left field. In the top of the fifth, junior infielder Mackenzie Cleary drove in another run for Albany on a sacrifice fly-out to center field. Sophomore outfielder Donna Conrad also drove in an RBI in the fifth, chalking up a fifth and final run for the Great Danes. In the bottom of the fifth, first-year middle infielder Meghan Romero homered to  center field with an RBI, bringing the game’s final score to 1-5. Following this contest, Albany’s record improved to 16-8.

On Saturday, the Raiders started out the day with enthusiasm, heading into their doubleheader with fervor. In the first game, the visiting Black Knights initially pulled into the lead in the top of the first inning after scoring a run due to an error on the part of the home team. Shortly thereafter, the Raiders pushed back when sophomore third baseman Holly Geranen knocked a single up the middle, bringing in an RBI and putting the Raiders on the board. The game remained tied until the bottom of the fifth inning, when the home team pulled into the lead as first-year catcher Baillie Jorth drove a single up the middle and brought in the game’s final run, sealing the 2-1 victory for the Raiders.

The day’s second game proved to be a greater challenge for Colgate, which became apparent in the first inning when Army immediately pulled into the lead as senior infielder Kasey McCravey hit a homer to center field. In the fourth inning, the visiting team scored another run when first-year  catcher Maddie Kim’s grounder to third caused an error and allowed her to bat in an RBI. In the bottom of the fourth, the home team fought back when junior pitcher Gillian Murray brought in a run with a single up the middle. In the fifth inning, the Black Knights widened their lead scoring three more times. Though the Raiders were also able to notch two more runs in the bottom of the fifth, the visiting team persisted scoring another two runs in the top of the sixth. Though the Raiders scored once more in the bottom of the seventh inning, the game’s final score stood at 7-4 with the win going to Army. Of Saturday’s performance, head coach Melissa Finley had some powerful insight to share.

“It was refreshing to see the team ready to compete today[…] All around it was a great team effort and it was great to see them play as a unit,” Finley said.

Next up for the Raiders is a two-game series against Lehigh University this coming weekend, for which they will travel to Bethlehem, Pennsylvania to take on their Patriot League foe.