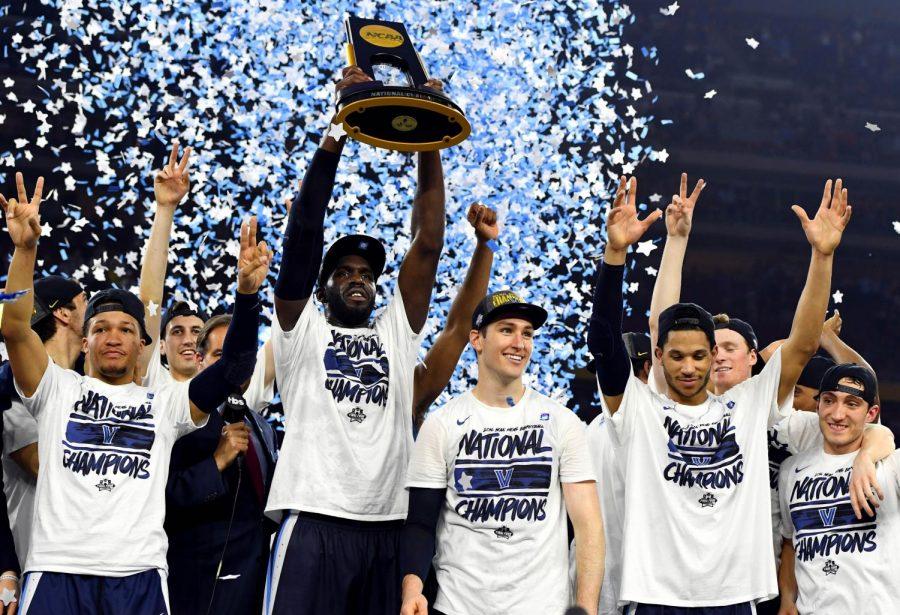 The Wildcats celebrate their second National Championship in style after beating North Carolina, as senior stars Ryan Arcidiacono and Daniel Ochefu will leave the Main Line as Villanova legends.

This year the NCAA college basketball tournament finished in an awesome and dramatic way. The Final Four games weren’t great games to watch, as the North Carolina Tar Heels defeated Syracuse by 17 and the Villanova Wildcats set a record by beating Oklahoma, 95-51. Going into the finals, I was worried that one team might begin to struggle and that the game would quickly turn into a blowout. Both teams, Villanova and North Carolina, had so easily defeated their Final Four opponent that I knew if either failed to perform, the other was too good not to capitalize off of their mistakes. However, the contest remained close throughout, with each team showcasing their talents, and the game ending in dramatic fashion with a buzzer-beater three pointer to win the national championshp.

In the first half, Joel Berry II was unstoppable for the Tar Heels, scoring 15 points and virtually not missing from the floor. However, the Wildcats contained North Carolina’s big men, forcing their offense to rely on perimeter shooting. While the Tar Heels shot the ball well in the first half, their normal offensive schemes were disrupted, making Brice Johnson a non-factor in the period. At the half, the Wildcats trailed, but after North Carolina’s incredible shooting performance, the differential was only five points.

In the second half, Villanova picked up its play on both sides of the ball. They immediately went on the offensive, pressuring the Tar Heels and making them uncomfortable on offense. The gap was closed and for much of the second half the Wildcats led the scoreboard. North Carolina’s post players continued to get frustrated, as Kennedy Meeks was called for three questionable fouls and Johnson begged to get more offensive touches. His wish was granted, as he ended up with 14 points in the game, but the team still relied heavily off of the play of their two guards, Berry and Marcus Paige. Paige ended up with a phenomenal performance. He was aggressive getting to the rim and hit 4 of 7 shots from three-point land.

Down by as much as seven with time ticking away on the clock, a few costly turnovers from Villanova and aggressive play by North Carolina left them down three with less than 10 seconds on the clock. The ball was inbounded and passed out to Paige on the wing. Big man Daniel Ochefu almost intercepted the pass diving on the ground, but the ball found its way into the hands of Paige. Paige nailed a three to tie the game with just a few seconds left on the clock off of a ridiculous, hanging double-pump shot. However, the excitement was not over. After calling timeout, Villanova had Ryan

Arcidiancono fly up the court with the ball and made a dribble handoff pass to Kris Jenkins, who put up a deep three as the clock expired. The shot ripped through the net and the arena erupted. From a much less than exciting Final Four, this contest proved to be the most electrifying back-and-forth championship game I’ve ever watched. Both teams played great; unfortunately for North Carolina, Nova simply had the last shot.