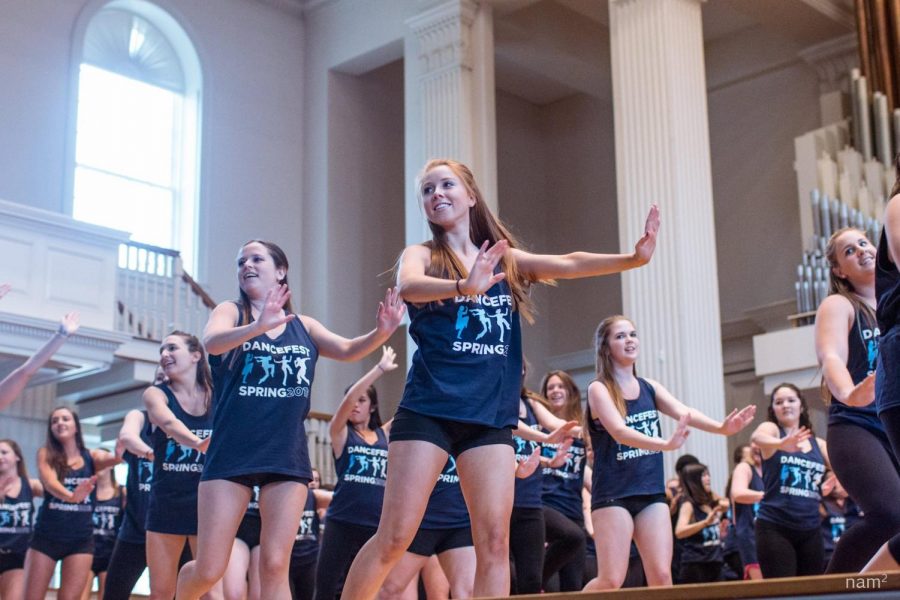 Co-captains of Groove Dance Troupe seniors Grace Tormey and Ali Vangrow bust a move in the opening number of DanceFest.

On Thursday, April 21, Colgate’s bi-annual Dancefest kicked off in the Colgate Memorial Chapel to a full house. Co-hosted by seniors Benjamin Fortgang and Ryan Clements, and organized by Groove Dance Troupe, the event began at 6 p.m. and lasted over two hours, one of the longest Dancefests in recent memory.

“Dancefest this semester was pretty similar to other semesters, but there were more dancers involved and the performance as a whole was longer. This was because a few groups recently became SGA recognized. The co-captain of Groove, Ali Vangrow, and I approved a lot of the non-SGA recognized solos/groups to be a part of this semester’s Dancefest as well because they added new talent and style to the mix. Dancefest had a record high of 29 dances this semester,” senior Grace Tormey said.

There were performances by groups that have been on campus for multiple years, including Groove Dance Troupe, Fuse Dance Company, Kuumba Dance Troupe, Colgate Ballet Company, Colgate Ballroom Dancers, Wolfpack and others. There was also the addition of the newly formed and SGA-recognized group, Melanated, which performed a crowd favorite dance entitled “Melanation”. In addition to Melanated, the Irish Dance club recently became SGA-recognized this year. Both of these additions were met by audience approval.

“I’m a big fan of the Irish dancing and my girl Anna Muse killed it. I also think some of the coolest parts of Dancefest were the big numbers where some people that aren’t your usual dancers got involved,” sophomore Jacob Daugherty said.

As usual, a line formed across the academic quad more than an hour before the event began. This year, Colgate’s Students for Students organization served Thai food on the quad to accommodate students who forfeited dinner for a good seat by lining up early.

Preparation for Dancefest began at the beginning of the spring semester. Each group practiced their routines all semester and added dress rehearsals the week before DanceFest.

“The memory of countless hours spent practicing in Little Hall during the semester, the roar of the audience’s approval after our piece and the post-performance smiles of my fellow group members make [Dancefest] all the more worthwhile and rewarding,” sophomore and Wolfpack member Marcell Sandor said.

In addition to rehearsing their routines, Groove Dance Troupe spent the past few weeks preparing for Dancefest. Co-led by Tormey and Vangrow, Groove took charge by organizing the logistics of the event. They made posters and programs, held auditions for the hosts, choreographed the opening number and hyped up the publicity. Additionally, Groove chose “Our Type of Party” as the theme of this semester’s Dancefest.

“The theme each semester is derived from a lyric from the opening number song. This semester, that song was ‘Five More Hours’ by Chris Brown and Deorro, and the theme we chose was ‘Our Type of Party.’ The themes don’t necessarily make sense to people at first, but once they attend Dancefest and see the opening number, they usually make the connection,” Tormey said.

“Our Type of Party” turned out to be an apt theme as the event passed by in a blur of dancing and entertainment. Even during a moment of technical difficulties a quarter of the way through the evening, co-hosts Fortgang and Clements managed to keep the audience entertained. As usual, Dancefest was one of the best-attended and most enjoyable events of the semester.

“Dancefest is one of the few events on campus that brings everyone together in celebration of the wealth of talent and diversity at Colgate,” Sandor said.