Can LeBron and Cavaliers Finally Win an NBA Title? 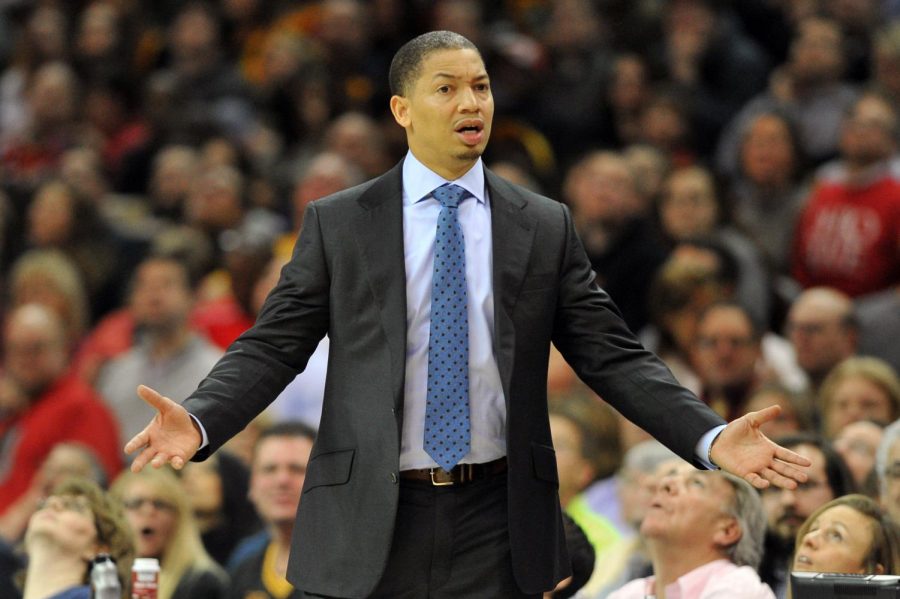 Rookie coach Tyronn Lue has been thrown into the fire of the Cavaliers organization and its fanbase, all with hopes of a championship.

In 2014, the Cleveland Cavaliers acquired forwards LeBron James and Kevin Love, who combined with All-Star point guard Kyrie Irving formed a dynamic “Big Three.” After being labeled a losing team the past four seasons, they had an impressive record of 53-29, seeded No. 2 in the Eastern Conference. In the post-season, the Cavs entered the NBA Finals with only two playoff losses, both coming in the second round. Their Finals opponent was the prolific Golden State Warriors, who similarly had only lost three playoff games. While ultimately the Cavs lost in six games, their future was bright, as much of the playoffs were solely in the hands of LeBron. Love had gotten injured in the first round, and Kyrie later was sidelined in the Finals. Lebron ended up with a record-setting playoff performance, upset at losing but optimistic of the team’s chances with a healthy roster.

While the 2015-2016 season has been increasingly successful, the Cavs still remain a notch below the best teams in the West and most likely will not be taking home a Finals trophy this season. Yes, the Cavs are statistically better than last season. This year they have won 57 games. However, many of the same structural problems remain within the organization and have gotten even more apparent.

The first issue that seems to constantly pop up is that of coaching. Players are supposed to belong to an organization, something bigger than themselves. Coaches are supposed to command that larger entity, leading the team to collective success. However, LeBron seems to break the very fabric of what binds together the pieces of an NBA organization. He is so important to the team, the organization and even the city, that he alone is the very structure that all else is built around. While that means that the team will always be productive as long as LeBr on is on the court, it also poses a problem of stripping the coach of necessary power. This year, head coach David Blatt appeared as a scapegoat for the Cavs’ lack of championship caliber production and was fired midseason, replaced by rookie coach Tyronn Lue. Maybe the coaching simply doesn’t matter. Maybe LeBron doesn’t need a coach at all. But for someone like myself, who believes in the influence a coach has over his players, I’d immensely prefer the veteran coaching of Gregg Popovich compared to that of the novice Tyronn Lue.

Secondly, a huge problem is the rumor mill that was the Cavs’ trade status. How can a team win a championship if they aren’t confident in their roster? The Cavs weren’t discussing trading deep bench players; they were discussing trading integral parts of the Big Three! Basically, anyone besides LeBron seemed to be on the market. Kyrie was rumored to be unhappy playing in Cleveland and Love was reportedly almost traded to the Celtics. If the possibility of your second and third best players leaving for another organization doesn’t shake a team to the core, I don’t know what would.

It’s not as important that the two could have been traded. What is important is the underlying problems that would allow for the possibility of them parting ways with the team. Love has seemed to never quite fit into the offense, leading to decreased numbers and perplexingly greater results when sidelined in the playoffs. Furthermore, Kyrie seems to not fit because he is simply too good to play alongside Lebron. Irving is a scoring guard, through and through, and at 20 points per game is rumored to have conflicting ideologies with that of his teammates. It’s been said that he has to be a pass-first player, committed to winning, if the team is to succeed; however, he denies having any problem in that arena.

Personally, with the way the Cleveland has performed compared to its competitors, I don’t see the Cavs winning a championship this year. While I’d never advise someone to bet against LeBron, he’s the best in the world simply put and always has the potential to find a way to win, just don’t bet on him either.