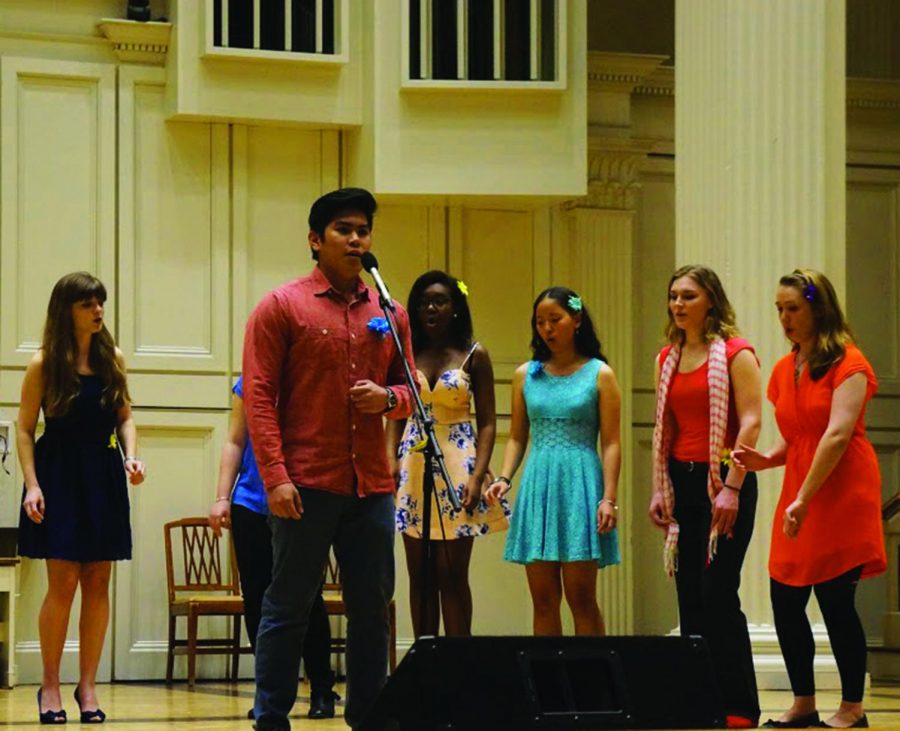 Mantiphondrakes serenade fellow students featuring music from a variety of genres and styles such as Kanye West and U2.

Students, friends and family gathered in the Memorial Chapel on Thursday, April 7, for the Mantiphondrakes Spring Concert. The concert began with an upbeat toe-tapper, “Let Me Down Easy,” featuring a solo by sophomore William Milligan. Using beautiful harmonies and powerful rhythms to drive the melody, the first number really captivated the audience’s attention. Additionally, members wore bright colors on stage, adorned with a flower, which helped remind us that it’s spring despite the snowfall outside. Mantiphondrakes President senior Karl Uy then spoke, introducing the group’s members and objectives. From his speech, it was evident that Uy truly loves being involved in the vocal group and enjoys sharing his talents on stage.

The group sang The Neighbourhood’s “Sweater Weather,” channeling the cold and snowy weather outside. Uy beatboxed which took the rhythm up a bit; this song sounded much like the original.

The Mantiphondrakes then switched it up a bit, performing the introduction from the T.V. show Avatar. It was interesting to see the spoken-word performed by junior Andie Nugent with the accompaniment of strong instrumental-like backups by the group members. Each unique voice portrayed a different instrument.

“I thought it was really cool that they did the Avatar intro. I thought they did a really good job,” sophomore Sara Cummings said.

The group also arranged an interesting mash-up of Awolnation’s “Sail” and Sia’s “Elastic Heart.” The audience definitely did not expect these two tunes to come together, one an EDM hit and the other a Top 40 smash. However, both songs are deep in emotion and rely heavily on strong beats to drive the rhythm. The group infused the harmonies and solos in these songs seamlessly.

The group also sang popular songs featuring artists like Daft Punk in a medley featuring a solo by senior Rachael Shook, and a mash-up of Gotye’s “Somebody that I Used to Know” and Kanye West’s “Love Lockdown.” This tune featured the solo debut of sophomores Danielle Paynter and Kayla Sturgeon, who shared a moment in the spotlight for a beautiful duet. Uy called the girls forward following the performance to give them a shout-out and a huge round of applause from the audience.

After an awesome, melodic version of U2’s “With or Without You,” the show appeared to be over. But not for long, as the group took the stage for Michael Jackson’s “Man in the Mirror.” The group arranged some challenging songs, including a key change and performed it masterfully. Of course, the number ended in a standing ovation. The tremendous support of the student audience truly demonstrates the role that each of these singers portrays both on-stage, and the role that the group plays around campus.

“I liked that they featured a variety of music genres and styles so that each member was able to showcase their unique talents,” first-year Mara Stein said.