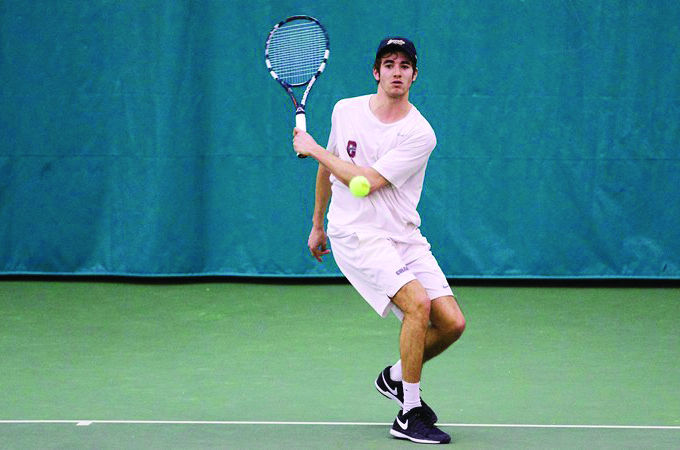 Junior Bobby Alter, along with his doubles partner senior captain Nick Laub, led the Raiders to a decisive 4-1 victory over Bucknell with their doubles win.

The men’s tennis team came away with a split decision after falling 4-3 to Lehigh on Saturday, but rebounding in a big way on Sunday to beat Bucknell 4-1. The Raiders are now 1-2 in Patriot League play, and 12-5 overall.

At No. 1 singles, Daugherty took care of business, staging a comeback after dropping the first set to secure a 1-6, 6-4, 6-0 win over Kochman. At No. 2 singles, Laub fell to Petersen in three sets 2-6, 6-3, 6-2. The highlight of the day came from first-year Noah Rosenblat who finished first for the Raiders after cruising past Born 6-2, 6-2 at No. 3 singles. Alter and Hirschberg posted identical losses at No. 4 and No. 5 singles, losing to Cooper and Colin Nardella 7-6 (5), 6-2 respectively. The match came down to the No. 6 spot, where Colgate was unable to come away with a win. Junior Win Reynolds narrowly lost this one to junior Ethan Bogard 3-6, 7-5, 6-3.

This was the Raider’s second consecutive 4-3 loss in Patriot League play, but if you thought this would slow the team down, you were mistaken.

“The 4-3 loss shows how far we’ve come from last year. We are a completely different team this year in terms of our competitiveness and confidence. We were just a couple points away in both singles and doubles to winning this match easily, and we are hoping we get another chance at them later this season in the tournament” Hirschberg said. It seems as though the team has been able to internalize these losses and use them as motivation to make the final improvements necessary for the postseason.

“We are trying to use this loss [as] fire to work hard all week. These matches coming up [are] even more important for the seeding at the end of the year, so everyone has been trying to stay focused all week and work hard,”

Luckily, the Raiders were able to rebound in a big way the following afternoon. After falling to the Bison in the postseason last spring 4-0, the Raiders had this match circled on the calendar all year and were able to show just how much the team has improved from last season. Colgate won 4-1 but it should be noted that Hirschberg and Reynolds were cruising through their matches at No. 5 and No. 6 singles when the match was called.

The Raiders came out of the gates on fire, sweeping the doubles point with Daugherty and Haile defeating senior Nick Bybel and first-year Andrei Vitiuc 6-4. At No. 2 doubles, Laub and Alter beat sophomores Daniel Wright and Ben Gerber 6-4.

With the doubles point decided, Hirschberg and Reynolds did not have to finish their match against sophomores Max Kane and Timber Erskine, which was knotted 5-5 at the time. Daugherty suffered a rare loss at No. 1 singles to Bybel 6-3, 6-4. While he may have lost on Sunday, Daugherty has been the cornerstone of the team this year, typically winning both his doubles and singles matches against the opposition’s best players.

“Having a guy like Daugherty is vital for a college tennis team. When the other guys on the team see Daugherty destroying the kid he is playing or when we see him come back to win a match after losing the first set, it fires us up and helps us in our own matches,” Rosenblat said.

The rest of the team was able to rally, and display the true strength of this Raiders team – depth. Laub defeated Wright at No. 2 singles 6-4, 6-2. Rosenblat had one of his most impressive matches of the season, crushing Kane 6-1, 6-2. In recent weeks, Rosenblat has been coming into true form, which is a scary thought for Patriot League foes as it makes the Raiders’ top three players all capable of interchanging spots to produce better matchups.

“I think my aggressive mindset both physically and mentally is what [has] allowed me to cruise through the[se] matches,” Rosenblat said. He has been far more proactive in recent weeks, as reflected in his analysis of the Bucknell match. “I felt like I was able to control the points and finish at the net, which is my strength,” Rosenblat said.

Alter was able to fight through a tough opponent in Vitiuc at No. 4 singles 6-4, 5-7, 6-1 to secure the Raider’s win. Hirschberg was up 6-0, 1-0 against sophomore Ben Gerber and on his way to a double bagel when the match was called. Similarly, Reynolds was up 4-1 against Erskine.

The Raiders take on Lafayette at 2 p.m Sunday, April 10. Head coach Bobby Pennington’s goal to peak at the end of the season appears to be coming to fruition as the Raiders pick up steam against league rivals.