Softball Comes Out on Top Against Crusaders: Raiders Get 2/3 Wins in Series vs. Holy Cross 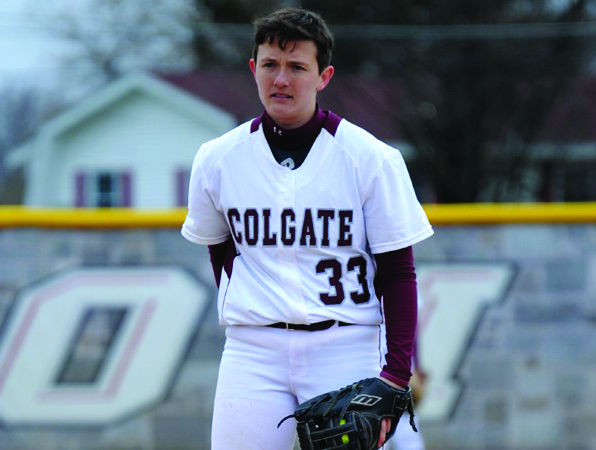 Last week, the softball team kept busy as it hosted the Binghamton University Bearcats for a doubleheader during the week before traveling to Worcester, Massachusetts to take on the Holy Cross Crusaders for a three-game series over the weekend. Both series yielded mixed results for the team, and at the week’s conclusion their record moved to 7-21 overall and 3-5 in Patriot

The week got off to a rough start for the Raiders when they lost their first game 8-0 to the Bearcats on Tuesday in just five innings. Binghamton came out of the gate strong, building a 3-0 lead in the first inning. It began when sophomore outfielder Jessica Rutherford batted in two RBIs, knocking a triple to right field. Soon after, senior catcher Lisa Cadogan brought Rutherford in by flying out to right field. Binghamton built their lead further by scoring four more runs in the fourth inning, when senior outfielder Sydney Harbaugh drove in two RBIs doubling to right field. Rutherford notched another RBI by knocking a sacrifice fly to right field. Crysti Eichner’s single to the pitcher brought in another run. Harbaugh batted in the game’s final run in the fifth inning by doubling to left center.

Tuesday’s doubleheader proved more fruitful for the Raiders. The visiting team got off to a good start building a three-run lead in the second inning when junior outfielder Katie Bushee batted in two runs with a double to right field, and then scored on a single hit by first-year infielder Lauren La Terra. Binghamton pushed back in the third inning when junior outfielder Gabby Bracchi’s single to the left side brought in a run. Shortly after, sophomore infielder Stephanie Bielec put another run on the board, stealing home. In the fourth inning, La Terra further contributed to Colgate’s lead homering to center field, earning herself three more RBIs. The Bearcats continued to battle through the fifth inning, putting four more runs on the board. However, senior pitcher Brigit Ieuter solidified the win for Colgate singling up the middle later in the inning, allowing the home team to eke out a 7-6 victory.

On Saturday, Holy Cross tested the Raiders’ resolve in the day’s first game, building a 5-0 lead in the first three innings. Though Colgate would strike back scoring four runs in the fourth and sixth innings, thanks to a pair of singles from junior outfielder Tara Grennan, the home team clenched the win in the sixth inning by scoring twice more, bringing their run total to seven. However, both Saturday’s second game and Sunday’s game proved to be more successful campaigns for the Raiders, with the visiting team winning Saturday evening’s game 2-1 and Sunday’s game 2-0. Saturday’s second game remained scoreless until the fourth inning, when junior Gillian Murray was able to score due to a fielding error. Holy Cross struck back scoring once in the sixth inning, but another run scored by the Raiders in the eighth inning guaranteed them the win. Sunday’s game was similarly uneventful, as the contest’s only two runs occurred in the first and seventh innings. Both of these runs can be credited to Grennan. These victories allowed them to win the series. When asked about Sunday’s performance, head coach Melissa Finley had some insight to share.

“We had another outstanding performance on the mound from Kyle Griswold…We had some tough plays early on when we had an opportunity to break the game open but we did enough to secure the victory,” Finley said.

Next up for the Raiders is a back-to-back matchup against the Bucknell Bison on the road this weekend.