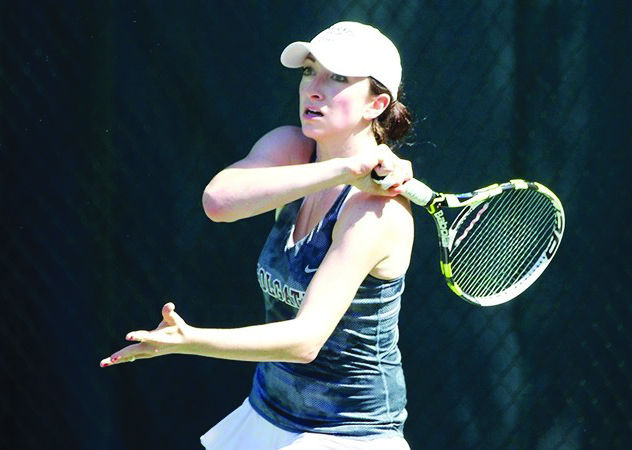 While on the road this past weekend, women’s tennis suffered two difficult losses to Patriot League rivals Lehigh and Bucknell. The Raiders first fell to Lehigh 7-0 and then to Bucknell 4-0 after playing to clinch. The back-to-back defeats put Colgate at 6-8 for the season and 1-2 in the Patriot League.

Lehigh came out strong on Saturday, first claiming all doubles matches to gain the 1-0 lead, and then finalized their win by sweeping all the singles matches. The Mountain Hawks improved to 3-1 in Patriot League play with the victory.

According to senior co-captain Katie Grant, the scores are not entirely reflective of how the matches went.

“I don’t think the score is reflective of individual matches. Against Lehigh, both No. 1 and No. 4 singles were decided in tight third sets, so if doubles had gone differently it easily could have been a much more competitive match,” Grant said.

Junior Kaelin Brittin agreed and added that the team stays focused during difficult matches by keeping their end goal in mind.

“We stay motivated by knowing how important both of these matches are for our standing in the Patriot League tournament,” Kaelin said.

Sophomore Kelly Klein played at No. 1 doubles with first-year Lauren Hyland for the matches against Lehigh and Bucknell. Klein recognized the difficulty in playing two strong teams back-to-back.

“I know against Lehigh, Lauren and I had pretty tight matches, and whenever I looked at the rest of the matches, we were all fighting hard. We definitely had more energy against Lehigh, and had we not been down any players and had no injuries, the score could have been very different,” Klein commented.

After an exhausting match against Lehigh, the Raiders had to go up against Bucknell the following day. The No. 2 doubles pairing of Grant and Brittin held strong in their matchplay and took down Bucknell’s team of first-year Lauren

Fishbein and sophomore Lisa Jouravleva by a score of 6-3.

Despite the pair’s solid doubles win, the Bison were able to take No. 1 and No. 3 doubles, thus earning the first point. After Bucknell secured wins at No. 1, 2 and 4 singles, their victory was decided.

Grant explained why playing to clinch can leave the team distraught.

“Kaelin and I won our No. 2 doubles match and No. 3 was points away from pulling theirs out. Playing to clinch is tough because you don’t get to play out the rest of the matches.”

Colgate is now 1-2 in the Patriot League, but Brittin is confident there is time to turn their record around.

“They were both two solid teams but I thought we played well. It was obviously tough loosing to two Patriot League teams and it is definitely tough knowing it will affect our Patriot League standing but we still have four matches a head of us we need to focus on.”

Doing well in Patriot League matches is essential if the Raiders want to have a good seed in the tournament at the end of April. Hyland sees how focused and determined the team is to do well in the next few matches.

“Looking forward I think we are in a good place for our upcoming matches. The team’s goal is to win our next four matches which will ultimately get us a very good seeding in the Patriot League tournament,” Hyland said.

Klein agreed and feels that matches against teams like Lehigh and Bucknell will only help them to improve overall.

“It was definitely a tough weekend, but we expect to get these next four matches because ultimately we have a thicker skin from these losses. We’re not disheartened at all and plan to come back and redeem ourselves at Patriots in a few weeks,” Klein said.

Next the Raiders face LeMoyne on April 7 at 4 p.m. The match will take place on the J.W. Abrahamson Tennis Courts.