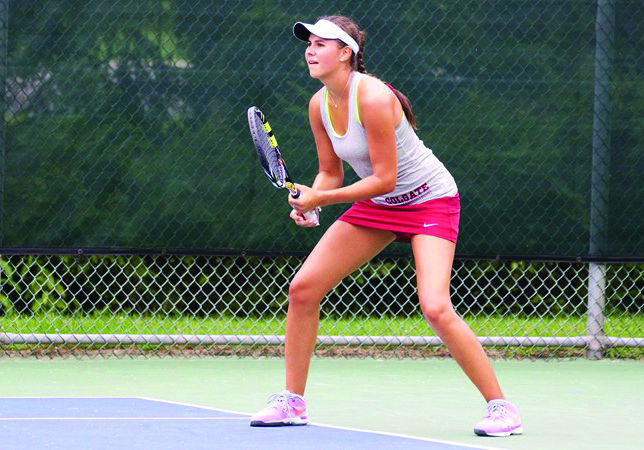 The Raiders capped off a very successful week against two tough opponents: Le Moyne and Lafayette. Colgate came into both with a winning mentality and secured 6-1 victories over both teams.

In their first game, the Raiders hosted Le Moyne on their home court and came out of the gate seeking a quick victory. Claiming two out of the three double matches, the Raiders got a 1-0 advantage early on. Colgate then moved on to singles play, where they claimed five out of six games. First-year Lauren Hyland played a long and difficult singles match at No. 1 and achieved the win. From there, it was relatively smooth sailing for the Raiders. Junior Kaelin Brittin had some interesting insight on what went well during the Le

“We all brought a ton of energy and intensity. I think that definitely was a factor in why we won 6-1,” Brittin said.

Having a high level of energy certainly helped the Raiders get this win. Hosting a team on their home court and coming into the match with a winning mentality makes all the difference. That said, there is still much that the Raiders need to work on if they are to make it deep into the Patriot League Tournament. Brittin also shared her thoughts on what the team could have done better in the Le Moyne match.

“We could have maintained that energy for a longer period of time. We all knew we were the stronger team and had a lot more confidence than in past matches, but we need to remember it’s a long match and high energy is important all the way through,” Brittin said.

Endurance is very important in a game like tennis, as matches often last a long time. This is certainly something that the Raiders can continue to work on as the season approaches its end and the team prepares for the Patriot

Coming off this victory, the Raiders then traveled to Easton, P.A. to face off against Lafayette. The stakes for this game were a little larger than that of the Le Moyne match because this was a Patriot League foe. With patience and the ability to execute all scoring opportunities, the Raiders came out of this game with another 6-1 victory.

Leading the charge for the Raiders was Hyland, who not only won her No. 1 doubles match with senior Jennifer Ho, but also won her No. 1 singles match. Hyland has been a huge force for Colgate all season and often sets the tone for how the rest of the match will pay out. When asked about the decisive win over Lafayette, Brittin again offered her thoughts.

“Lafayette is another match where we raised the level of our game. It was a Patriot League match so we knew it was really important to win,” Brittin said.

Although this was an important win for the team and a huge moral boost as their season comes to a close, Brittin went on to highlight some of the things that the team can continue to work on in their final weeks.

“I think we could work on doubles. Winning the doubles point always sets the tone for the rest of the match. Even though we won doubles, I think we could always work on closing in on the net and improve putting away volleys,” Brittin said.

Being aggressive during doubles play is something that the Raiders have certainly improved on throughout the season. Seizing and capitalizing on all scoring opportunities is also an aspect to the game that Colgate has gotten much better at. It all starts with leaders like Ho, Hyland and Brittin who set the stage for success. Getting some double wins early on in the match, as Brittin noted, is very important as it often dictates how the match will end. The Raiders are very good at keeping a lead, but not so great at closing the gap when they are down.

Looking ahead, the Raiders have two more games – both of which are home – against Marist and Loyola before they enter the Patriot League Tournament. The team has an overall record of 8-8, but they are riding a nice two-game win streak, so it is likely that they will be able to carry this momentum into their last two games and into the tournament. Brittin remains very positive for their overall outcome.

“We are confident we will be at least the sixth or fifth seed and very capable of making it to at least the semi finals,” Brittin said.