Around the Hill: Who is the Best Player in Major League Baseball? 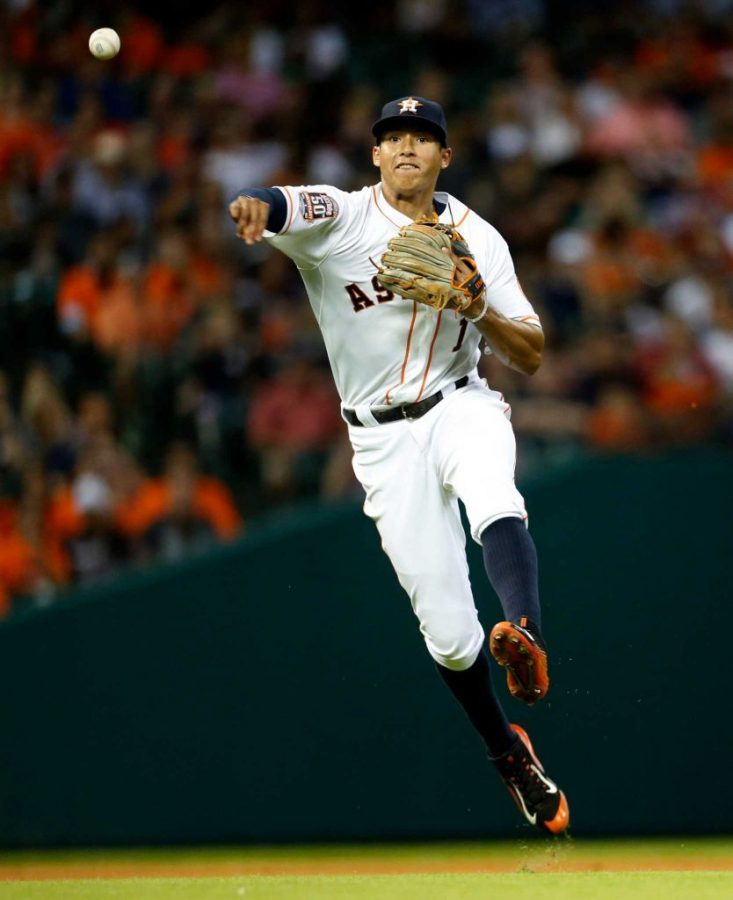 The young Astros shortstop is hitting with power and making plays like this.

In today’s MLB, Bryce Harper stands atop a mountain of young talent. The 23-year-old right fielder for the Washington Nationals just started his fifth season in the majors and is coming off a dominant 2015 season in which he won the NL MVP. Harper is already a three time All-Star and, alongside other youngsters like Angel’s outfielder Mike Trout, has ushered in a new era of Major League Baseball. Through nine games, Harper has four home runs, bringing his career total to 100 with a grand slam against the Atlanta Braves. The homer made Harper the eighth youngest player in MLB history to reach the century mark, only trailing notable sluggers such as Miguel Cabrera and Alex Rodriguez. Harper is well on his way to hit around 40 homers this year, and should repeat as MVP if he matches or bests his mark of 42 from last season. The only thing that could feasibly stop Harper from his streak of dominance is injury. Small injuries including a torn thumb ligament in 2014 have slowed down Harper in the past, but if he can stay healthy in 2016, MLB fans should expect great things. Harper has been so impressive early in his career that it would be no surprise if he finishes in the Top 10 of career home run leaders. While he probably will not be able to challenge Barry Bonds’ insane, albeit likely drug-fueled, 762 runs, Harper has the potential to be historically great.

The best player in the MLB right now is Houston Astros shortstop Carlos Correa. The 21-year-old is now in his first full season in the major leagues, and it did not take him long to ascend to the league’s elite. What’s captivating about Correa’s game is a beautiful swing and a powerful arm at short. He can do it all, leading the Astros to the playoffs last year and hoping to do so again in a stacked AL West. While Houston is off to a poor start this year, Correa has not stopped his torrid pace of production from last season, hitting three home runs in his team’s first 12 games. There is something quite special about his skill set that only Mike Trout of the Angels and Bryce Harper of the Nationals can match. I gave the nod to Correa over Harper because of Harper’s need for celebrity. Harper is a brash player aiming to make baseball “great again,” but in doing so he sometimes puts his skill set in the background. I’d rather see him solely tear it up on the field than clog up my ESPN viewing experience. Mike Trout is also a phenomenal talent, but his inability to lead the Angels to deep postseason runs has me skeptical about him deserving that No. 1 spot. In comes Correa. The kid can only go up from here, and I am excited about where he can take his team. We could see his dominance on the ball field for many years to come.

Baseball is a multifaceted sport, with many factors going into determining the best players. Is the best hitter the guy with the most hits, highest average, most homers, or most RBI’s? Is the best pitcher the guy with the most strikeouts, lowest ERA, or best win loss ratio? In the statistically dominated sport of baseball, hundreds of factors go into picking the best players. It would be easy to say that the MVP’s from last year, Bryce Harper (NL) and Josh Donaldson (AL), are the best players. One could also say pitchers are more valuable and that the 2015 Cy Young award winners, Jake Arrieta (NL) and Dallas Keuchel (AL), are the best in the game.  One metric I believe to be representative of the best players is WAR or wins above replacement. This complicated metric shows how many of the team’s wins that season are personally attributed to that player. For example, Curtis Granderson had a 5.11 WAR for the New York Mets last season, meaning that without him they would have 5.11 fewer wins than they ended up with. The league leader last year in WAR was Bryce Harper, amassing a very high 9.93. Very few people have topped 10 WAR in the modern era of baseball. I still believe that Harper is not the best in the game because last year was his first real breakout season. The best player in the game is Mike Trout of the Los Angeles Angels of Anaheim. He has amassed a WAR of nearly 10 in every season since 2012. These consistently great numbers are unparalleled, and that is why I believe Trout is the best in the game.