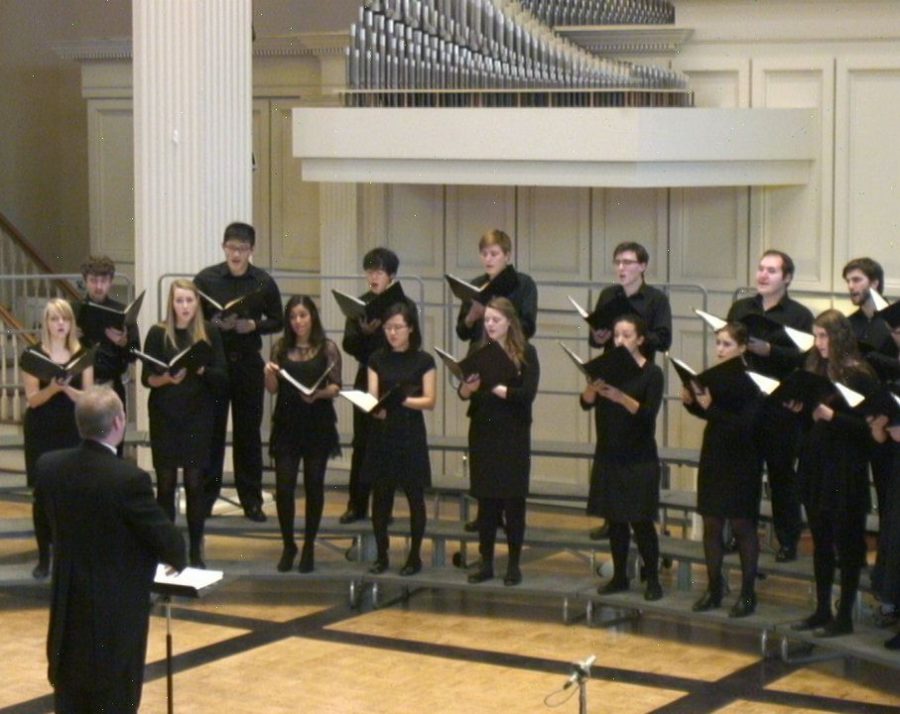 The Colgate University Chorus, along with a guest orchestra, performed their spring concert under the direction of Dr. R. Ryan Endris, Director of Choral and Vocal Activities and Assistant Professor of Music at Colgate University. Accompanying the University Chorus were acclaimed soloists: soprano Evelyn Johnson, mezzo-soprano Sarah Ballman, tenor Anthony Webb and bass Jason Eck.  Members from both the university and local community gathered at the Colgate Memorial Chapel on Sunday, April 17 to listen to two powerful compositions chosen for the concert. The performance covered an extensive range of emotions, from the jubilant expressions of praise in Antonín Dvořák’s Te Deum to the mournful tune of Gioachino Rossini’s Stabat Mater. To conclude the concert, members of the University Chorus and the soloists joined together to end in a strong and hopeful note with the finale of Stabat Mater.

The University Chorus strived to ensure that their performance was nothing short of perfection, and members highlighted the amount of commitment they gave this semester. University Chorus soprano Christine Le recounted the efforts of the whole group to make sure the finale turned out well.

“We took such a long time to practice for that. It was so hard in the beginning. I was so frustrated, but towards the end we started to hit it and it actually turned out beautifully,” Le said. “[The finale] was my favorite. It was the last part when everything was there – the choir was there, the orchestra was there, the soloist were there.”

Members of the audience left the Memorial Chapel with positive remarks regarding the concert. First-year Araven Tiroumalechetty expressed his appreciation for the integration of the chorus and the orchestra, as well as his recognition of the soloists.

“It sounded really nice, especially with the inclusion of the orchestra. Also the soloists, who were really good,” Tiroumalechetty said.

University Chorus alto and first-year Rachel Huang conveyed her gratitude towards conductor Dr. Endris for his guidance and support.

“I really, really want to say thank you to our director, Ryan Endris, because he was willing to take me into the University Chorus and give me a chance to belong to a community and show my talents,” Huang said. “I got a chance to meet a bunch of awesome people and sing. It’s kind of like a stress reliever as well, so it was really a great experience.”