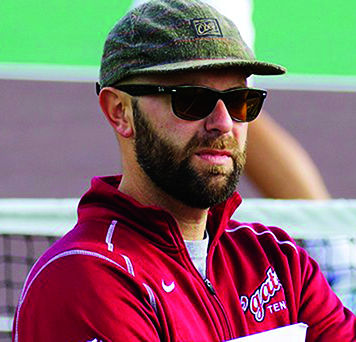 The men’s tennis team hosted their final Patriot League match of the season this past Sunday, sweeping Loyola 7-0 in front of a raucous crowd on Senior Day during Colgate’s Spring Party Weekend. The win improves the Raiders’ Patriot league record to 4-2, and makes this season their second straight with at least 14 overall wins between Patriot League and non-conference play.

The Raiders jumped out to an early lead against the Greyhounds by sweeping the three doubles point to earn a 1-0 lead. Senior captain Tom Haile and sophomore Jacob Daugherty took care of business at No. 1 doubles, dispatching sophomores Blest Jones and Brett Shriver 6-1.

At No. 2 doubles, senior captain Nick Laub and junior Bobby Alter defeated sophomore Tyler Blessing and senior Greg Olesnycky 6-3. While this was the closest match in terms of score, it was not nearly as tight a margin as one would think. Alter seemed intent on hitting the big serve, which paid dividends down the line for Laub. With the Greyhounds struggling to return the lefty’s serve, they decided to concede the net for most return points, allowing Laub to close out points easily with some cheeky drop shots and angles.

Juniors Jake Hirschberg and Win Reynolds cruised to a 6-1 victory at No. 3 doubles against senior Jordan Kuchta and first-year C.J. Cash.

For head coach Bobby Pennington, this was a great way to cap the season, securing his 100th victory as the men’s tennis coach in ten seasons, and his second consecutive 14-win season.

“Out of my 10 seasons at Colgate, this is arguably the most cohesive, fun and energized group I’ve ever had. Everyone plays for each other, maximizes their talent and make the most out of each opportunity,” Pennington said.

This was the last home match the seniors, Laub, Haile and Mark Pronchick, played for Colgate, and the fans really came out to show their appreciation.

“I’ve been lucky to coach them. The captains have obviously done a great job with the team,” Pennington lauded.

In terms of the effect of the crowd, Pennington was appreciative of the effort, yet wary of the potential negatives. “[It was a] rowdy, big crowd. It’s nice to play at home with all that energy. It can either be a distraction or a positive. The guys came out really focused and didn’t let it affect them in a negative way,” Pennington said.

With the four seed locked up for the Patriot League tournament, Colgate sets its sights on Lehigh for a first-round matchup. The Mountain Hawks got the best of the Raiders earlier this season in a 4-3 victory, but Pennington knows the team has pivoted since then.

“It came down the last match and could’ve gone either way, but I like our chances this time,” Pennington remarked in regards to the Lehigh matches.

The match is set to start on May 1 with the time to be determined. Hopefully the Raiders will be able to carry their momentum far into this tournament. Last season, the Raiders fell to Bucknell in the Patriot League tournament, so the team is looking for redemption this time around. This year’s team has roughly the same overall record, but a year’s more experience and toughness, so it should be interesting to see how the Raiders stack up when they face off in their rematch.