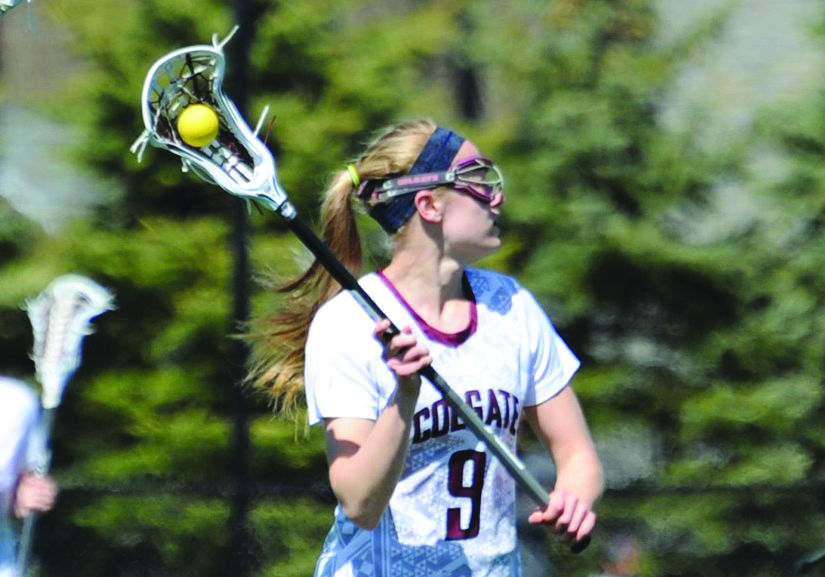 The Raiders faced the Binghamton Bearcats this past Tuesday, April 12 on the Bearcats’ home turf and successfully came out on top with a final score of 13-11. Up until the final minutes the match was a close one with both teams consistently maintaining a tie. Senior Taylor Fischer broke the 11-11 tie with nine minutes to go in the match, launching the Raider’s into a lasting lead that was furthered by senior captain Lauren Gorajek resulting in the final 13-11 score.

Sophomore midfielder Haley O’Hanlon scored an impressive four goals while Gorajek helped further the Raider’s lead with her hat trick. Senior Emily Peebles and Fischer both scored two goals each while senior captain Kallan Murray and sophomore defender Natalie Washuta both scored one goal each. First-year goalkeeper  Asil Asfour guarded the goal for the first half of the game while sophomore goalkeeper Molly Diamondstein took over in the second half, playing her first game of the season and successfully making five saves.

The Binghamton game was significant not only for the players but for the Raiders’ head coach Heather Young as the game marked her 100th career victory as a coach, 83 of which were with the Raiders. In regards to this accomplishment, coach Young had some very interesting insight to share.

“Becoming the program’s career wins leader is a testament to all of the great players and teams that I have had the pleasure to coach and be a part of. The players are the ones putting in the hard work on the field and I am grateful to them for putting me in this position. Colgate is a very special place and I am honored to be at the helm of such a great program,” Young said.

The Raiders once again met victory on Saturday, April 16 in their game against the Bucknell Bisons with a final score of 10-9. Junior midfielder Isabel Kreitler, O’Hanlon and Peebles played a significant role in this game accounting for six goals and six assists between the three of them. Colgate started the game strong with four unanswered goals within the first 10 minutes of the first half scored by Kreitler, Gorajek and Peebles, the latter three of which were assisted by O’Hanlon. Kreitler and O’Hanlon scored two of their goals in the latter part of the first half, entering the second half with a lead of 7-5. Kreitler scored her third goal at the beginning of the second half which was countered by two consecutive goals scored by Bucknell. Sophomore attacker Kristen Brigagliano and first-year defender Holly Korn both scored additional goals for the Raiders putting the score at 10-7 with less than 10 minutes to go in the game. This game marked the fourth hat trick of the season for Kreitler who leads the Raiders in points with 24 goals and 11 assists. Coach Young reflected positively on the game.

“We got some draw controls in the first half which led to our balanced scoring and offensive output. I was really happy with how we played against their defense. We’ve worked on it the past couple of games and we were very patient with our looks today, which was great,” Young said.

O’Hanlon also reflected on the progress the Raiders have made this season.

“We’ve been working a lot on our offense, being patient, finding the open girl and that’s what we did today. When we were patient, we were able to find that open girl and we were all confident with the ball and being able to shoot and score,” O’Hanlon said.

The two victories this past week were important for the Raiders and we hope to see them continue their success this week when they face Army on April 20. The Raiders will need to capitalize on this momentum in the three remaining games of the regular season. Colgate has an overall record of 5-8 and a Patriot League standing of 3-3. All three of the remaining games are against Patriot League foes, so three wins could not only dictate the success that the Raiders have in the postseason, but it would also give the Raiders a better seed going into the tournament. The last home game against Lehigh will come on April 23 after a trip down to West Point to play Army.

The match against Army is slotted to start at 4 p.m. on April 20, and can be viewed live on the Colgate athletics website.