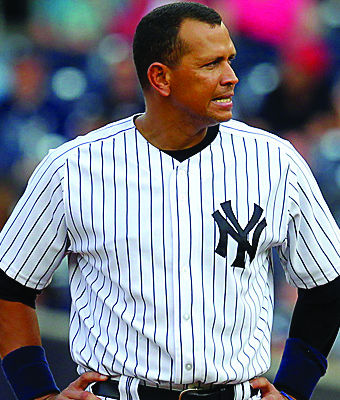 A-Rod publicly admitted to his performance-enhancing drug use during the 2001-2003 seasons, despite previous statements otherwise.

When all is said and done, Alex Rodriguez will be one of the most accomplished players in MLB history on paper. The New York Yankees third baseman and designated hitter is a 14-time All-Star, a three-time American League MVP and a World Series champion. Perhaps his most impressive accomplishment is his 687 career home runs, which ranks fourth all time behind Barry Bonds, Hank Aaron and Babe Ruth. However, much like Bonds, A-Rod’s legacy will never be squeaky clean. Rodriguez has been arguably the most polarizing player in the MLB throughout most of his career, disliked even by some fans of his own team.

Rodriguez was drafted by the Seattle Mariners No. 1 overall in the 1993 MLB draft, and he debuted a season later at the ripe young age of 18. Instantly, the rookie shortstop impressed the entire baseball world, finishing second in the American League MVP race. After five more quality seasons with Seattle, Rodriguez left the team for free agency. The contemptuous relationship with the public began after Alex signed the richest contract in baseball history: 10 years, $252 million to play for the Texas Rangers. Rodriguez initially played very well for Texas, winning his first AL MVP in 2003. He led the AL in both runs scored and home runs, but the team failed to make the playoffs.

The Yankees were in need of a third baseman and traded for A-Rod from the Rangers. The first four seasons in New York were nothing short of phenomenal for A-Rod, winning the AL MVP  again in 2005 and 2007. The Yankees continued their dominance into 2009 when they beat the Philadelphia Phillies in a six-game series.

In 2009, however, Rodriguez’s public image began to spiral downwards. Sports Illustrated released a report that included the names of 104 MLB players that had tested positive for steroids. A few days after the report was released, Alex publically admitted to using performance-enhancing drugs between 2001 and 2003, his successful tenure with the Rangers. The controversy of the drug use was amplified by the fact that two years earlier Rodriguez had denied ever using banned drugs.

After several more years of successful baseball, in 2013 Rodriguez was caught up in anther scandal. While healing from surgery to repair his hip, A-Rod began to fight with the Yankees management over being caught up in a circle of steroid use that involved multiple MLB players, including Brewers star Ryan many. Following the scandal, the MLB suspended Rodriguez 211 games, but the total was knocked down to 162, preventing him from playing the entire 2014 season.

This past March, Rodriguez announced that he would retire from baseball following the 2017 season, when his contract with the Yankees expires. Many baseball fans flip-flop when trying to decide how A-Rod should be remembered. One of the most prolific hitters of all time is also one of the few remaining stains from baseball’s darkest era. MLB has only started to recover from the issues that plagued it, thanks to young stars like Mike Trout and Bryce Harper. Alex Rodriguez belongs in the Hall of Fame, but he will likely have to wait longer than his statistics would suggest. He will certainly be remembered by the sport of baseball, but for the wrong reasons.