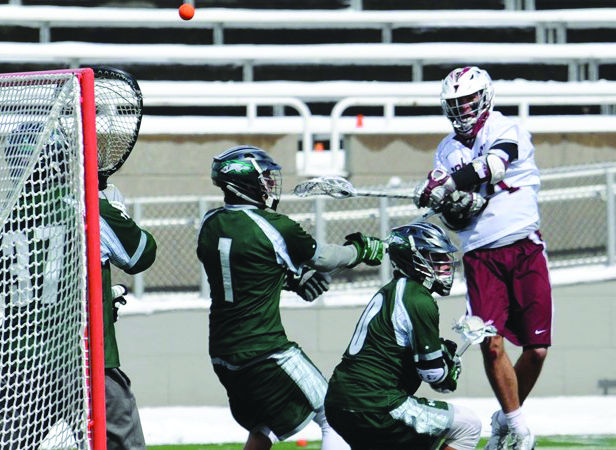 Sophomore attacker Joe Delaney had a decisive goal in the snowy battle against Loyola. Unfortunately the Raiders fell 12-4.

The men’s lacrosse team fell in wintry conditions to the No. 16 Loyola Greyhounds 12-4 this past Sunday. The Raiders  fell to 3-7 overall and just 1-4 in Patriot League play.

Despite the conditions, the Greyhounds jumped out to an early 3-0 lead just six minutes into the contest. Just under a minute later, first-year attacker Sam Cleveland scored an unassisted goal to push his season total to 13 goals, and cut the Loyola lead to 3-1.

Both team defenses would keep the scoring at bay until Loyola first-year attacker Pat Spencer was called for a one-minute slashing penalty that gave the Raiders a chance on the man-advantage. On the extra man opportunity, senior midfielder Cam Williams scored for Colgate, cutting the Loyola lead to just one. But, the Greyhounds would find the back of the net twice more in the second quarter to push their advantage to 5-2 just before halftime; an advantage they would hold for the rest of the game.

With the conditions improving and the snow dying down, the second half saw more sound play from both sides. Loyola struck first when junior attacker Zack Zirico completed his hat trick, scoring his third goal of the game. A little over a minute later, senior midfielder and captain Tyler Rigo tallied for the Raiders with just 7:47 remaining in the period to cut the Loyola lead to three once again. However, Colgate would never get within a closer margin for the rest of contest, as the Loyola Greyhounds would score four straight third quarter goals within a six minute period to give themselves a 10-3 lead heading into the final frame.

The Raiders would cut the lead to 10-4 with 7:05 remaining in the game when sophomore attacker Joe Delaney scored his third goal of the season. But two Loyola goals, capped off by Spencer’s fourth goal and fifth point of the game, gave the Greyhounds a 12-4 victory on the road.

The Greyhounds outshot the Raiders 47-26, most notably when they outshot Colgate 17-1 in the third quarter. Junior goalie Brandon Burke stopped 12 of 24 shots on goals. Colgate actually won the turnover battle 15-12, but was defeated by Loyola 36-23 in ground balls. The key stat of the game was Loyola’s domination of the faceoff. Loyola won 15 faceoffs compared to just four Raider faceoff wins.

Despite the six inches of snow that fell the night before, and nearly white-out conditions prior to opening faceoff, the Loyola Greyhounds were able to push their record to 7-3 overall and 4-1 in Patriot League play. The Raiders, who have faced three top-25 ranked opponents in their last five games, have lost each of their past five games and their previous four home games. Potentially, a change of scenery will be good for Colgate as they travel to Annapolis this Saturday to face the Navy Midshipmen. However, the Mids are 7-2 overall and 5-1 in conference play after winning their last five games, the most recent a 12-3 thrashing of Holy Cross. The Raiders will need to bring their best game for sure.

The Raiders will take on the Midshipmen in Annapolis, Md. this Saturday at 3:30 p.m. Raider fans will be able to watch the game on the CBS Sports Network. Compared to the mid-20 degree weather and snow flurries that the Raiders last contest was played in, the weather in Annapolis is forecasted to be a balmy 48 degrees. Maybe this slightly warmer weather will be exactly what the Raiders need to turn their season around.