Softball Loses 0-3 Against Lehigh: Can They Turn Their 4-19 Season Around? 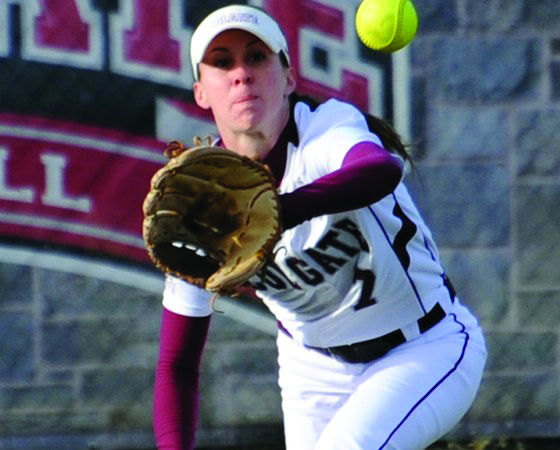 Junior outfielder Katie Bushee led the Raiders with her strong defense. She was the only Raider who scored a run the entire weekend.

Coming off an up–and–down against the  Army Black Knights at the end of last week, the Raiders came into a three–game stint at Lehigh with their heads up high ready for success. Unfortunately, the Raiders lost all three games, bringing their overall record to an unfortunate 4-19 standing.

In the first game, the Raiders fell to Lehigh in five short innings, with the final score closing at an easy 12-0 victory for the Mountain Hawks. The other three games did not fare that much better for the Raiders, with the closest game of the three ending in a 3-1 victory for Lehigh. In fact, this last game was the only game that Colgate was able to record a single run.

The Raiders have had a tough time this season scoring runs and getting ahead early on in the game. Given how the season has gone so far for the Raiders, it is not a huge surprise that they lost to Lehigh, who currently reigns as the top Patriot League contender (6-0 in league play). After the three tough losses, head coach Melissa Finley offered some insight on where she thinks the team went wrong.

“This was a tough series for us. Lehigh took advance of every opportunity that we gave them. [Sophomore pitcher] Kyle (Griswold) threw well enough to win today but we weren’t able to generate enough runs” Finley said.

The Raiders have only a few games left until they start Patriot League play. If they want to be able to compete in this tournament, then there are several fundamental initiatives that they need to work on during practice leading up until that point. The most important one is scoring runs early on in their games so that the opposing team cannot run away with a victory before the fourth or fifth inning. Maybe that can be achieved by switching up the batting order and emphasizing hitting during practice.

Their next games are on the road against Holy Cross in what will be a tough doubleheader this coming weekend. Both games are expected to start at 12 p.m., one on Saturday, the other on Sunday. So far, the Raiders have had very few of their games on home turf, which may be one reason why they have not achieved the outcomes that they desire. That said, hopefully they can turn around their season in Worcester, M.A. this weekend. Two wins at Holy Cross has the potential to change the momentum of their season and give them the much needed mentality boost that they need as they enter the final stages of their season.

While it is unlikely that the Raiders will make it very far in the Patriot League Tournament, they still have the opportunity to end the season with a decent record and come into next season with a different mentality and a fresh outlook on the season ahead. Thus, they could view their shortcomings of this season as a learning opportunity and motivation that they can then carry into next season. Last season, the Raiders went 17-21. While this record is not great, it does demonstrate that the Raiders are able to compete in this league and hold their own. After Holy Cross, the Raiders will face Syracuse and Bucknell.