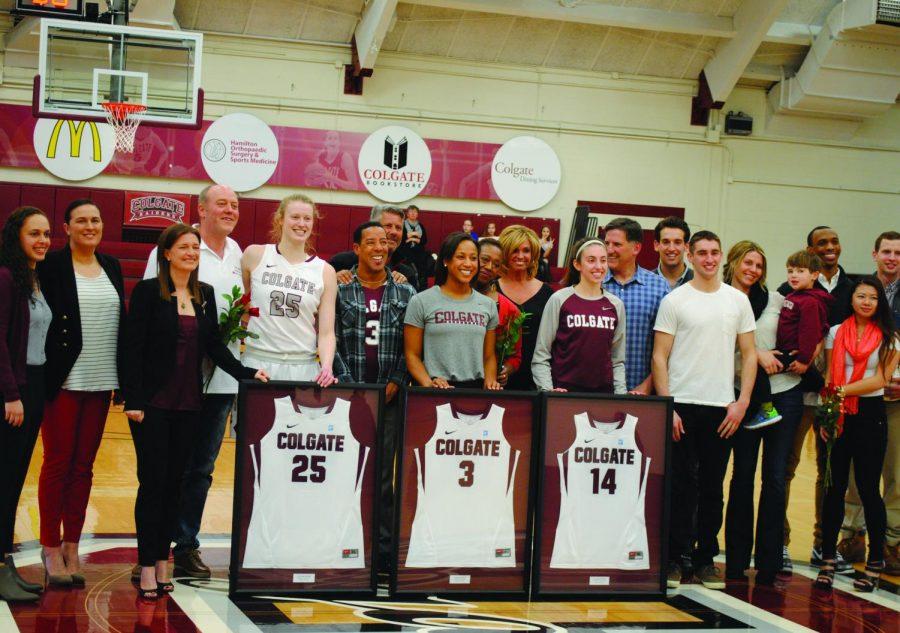 The seniors on the women’s basketball team were honored last week before their huge victory over Lafayette.

After suffering a tough road loss to Lehigh on February 24, 83-74, the women’s basketball team had a huge win on Senior Day against Lafayette. Seniors Randyll Butler, Paiger Kriftcher and Josie Stockhill were honored before the game for their dedication on and off the court. Unfortunately, Butler, the prolific 5’8’’ guard, suffered an injury early in the season and could not compete. However, Kriftcher and Stockill had strong outings, leading their team to victory over the Lafayette Leopards.

The first quarter was close, ending with Colgate down 16-13. However, the Raiders caught fire in the second quarter, scoring 23 points to end the half 36-28. Junior guard Katie Curtis led the way with 10 points, and Stockhill was the No. 2 scorer with seven points.

Colgate outscored the Leopards in each of the next two periods, 13 to 8 in the third and 21 to 19 in the final period. Stockhill added another 11 points to her 7, already going 5-9 in the second half. In addition, Josie was prolific on the board, grabbing seven rebounds in the first half and nine in the second. Her 16 total rebounds brought her season average up almost half a point, from 6.9 to 7.3. Kriftcher also performed in the second half, scoring all 10 of her points, going 2-3 from three and 3-7 overall. Curtis also had a strong game, scoring 15 points overall off of 6-16 attempts.

The team looks to retain some of its current talent in Curtis as well as two key sophomores: forward Julia Barcello and guard Ariel Etheridge. Curtis and Etheridge are the third and fourth highest scorers on the team respectively. Both are strong ball handlers, with Curtis being a great shooter and Etheridge an aggressive scorer when attacking the basket. Barcello only scored two points in the contest but showed great promise as a defensive presence, as she seemed to always be in the right position and was able to rack up three

Senior day against Lafayette went well and the three Colgate Seniors were honored by an astounding victory. When asked about the Raiders’ win against Lafayette on Senior Day, head coach Nicci Hays Fort had some interesting insight to share.

“We had really positive contributions from every member of our team. We let our pressure and our rebounding lead to some easy buckets, and Josie Stockill was huge,” Hays Fort said.

After an impressive 18 points, Stockhill ended this game on a very high note. All season she has proved to be an impressive force for the Raiders on both sides of the ball. She not only contributes meaningfully in the offensive zone, but is also a crucial defensive player. After this victory, she was very excited and shared her thoughts on the game.

“It turned out really great. We had great energy as a team and the momentum was pretty much with us the whole game. And the stats looked good at the end, as well. It was great to have my family here to see that game,” Stockhill said.

The Raiders have one final home game this season against Lehigh on Thursday, March 3. Last week the Raiders fell short on the road to Lehigh, so hopefully the team can get a strong showing of fans and rally to finish their season on a positive note with a two-game win streak. The Raiders are now 5-22 on their season, and 3-14 in the Patriot League, so this last game could really give the team some much-needed momentum as they head into postseason play. The game against Lehigh is scheduled to start at 7 p.m. on Colgate’s very own Cotterell Court on Thursday. After that, the Raiders will play in the Patriot League Tournament.