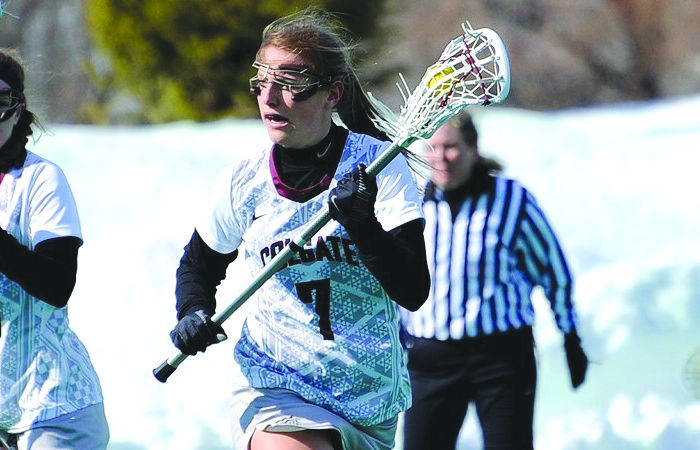 Junior midfielder and Raiders offensive superstar Isabel Kreitler recorded two assists in what was ultimately a 13-12 loss to Siena.

The Raiders experienced an unfortunate loss this weekend in their away game against the Siena College Saints on March 5, with a final score of 13-12. With this incredibly close game, the Raiders have a record of 1-3, while Siena stands at 3-1.

Colgate entered the first half strong, closing it out with a 9-5 lead; however, the Raiders got comfortable with their post halftime advantage and let the Saints overtake them in the second half with Siena players Cara McQullan, Michelle Schwartz and Sarah Croutier adding goals to the scoreboard.

Colgate briefly regained their three goal lead after Siena had scored three goals, bringing the game to 11-8 with senior captain and midfielder Lauren Gorajek scoring her third goal of the game.

With only seven minutes remaining in the second half, Siena’s Lauren Smith scored the first of five Siena goals, which led to a Saints’ goal streak that turned the score in their favor 13-11 with only 3:27 remaining in the game.

In the end the Raiders were barely outshot by the Saints 23-22, with first-year goalkeeper Asil Asfour starting in the net and making seven saves. The Raiders outshot the Saints in the first half, but lost their edge to the Saints who entered the second half strong, ultimately outshooting Colgate. Sophomore defender  Natalie Washuta reflected productively on this

“We definitely came out strong but let our lead get the best of us. We had some great moments, but then also had momentary lapses which were reflected on the scoreboard in the end. Our team is definitely focusing on cleaning up the little things and putting it all together. When we connect from the back line, through the midfield, and up to our attackers is when our true potential really shines. Once we seize every opportunity, I think we’re destined to have a great season,” Washuta said.

After scoring three goals for the Raiders, Fischer felt Colgate’s performance against Siena showed a lot of promise for the remainder of the season.

“We came out really strong in the first half of the game, but unfortunately we couldn’t hold our lead for the full 60 minutes. Siena did a great job pressuring us in the transition and had an amazing comeback in the second half, outscoring us eight to three. We had a great run at the end, though, when O’Hanlon and Bowles caused a huge turnover, leading to Kristen Norden scoring a goal with 30 seconds left to bring us within one goal of Siena. Haley O’ Hanlon came up with a crucial draw control and we were able to get a shot off with 10 seconds left, but couldn’t quite find the back of the net,” Fischer said.

Fischer chose to see the positives in Colgate’s performance noting, “It was a tough loss for the team, but there were a lot of positives that came out of it as well. I think we’re all ready to put Siena behind us and prepare for our

The Raiders will attempt to redeem themselves on Sunday, March 13, when they face off against Brown in Providence, R.I.