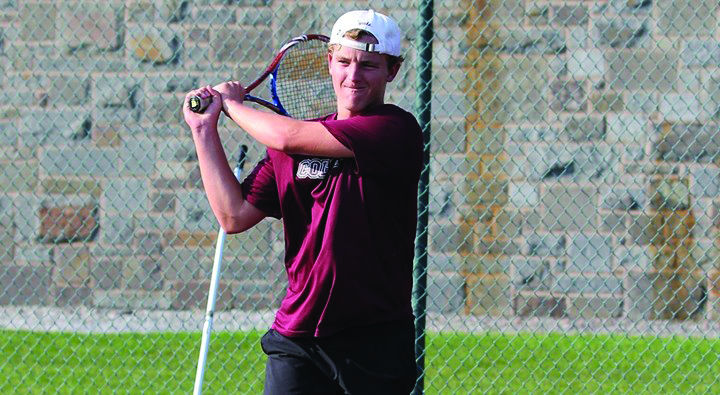 Junior Winston Reynolds III and junior Jake Hirshberg were able to claim a decisive doubles victory for the Raiders in their game against Drexel; the duo also contributed to the Raiders’ 7-0 victory over La Salle.

The men’s tennis team traveled to Philadelphia this past weekend to take on Drexel University on Saturday and La Salle University on Sunday. The Raiders came away from this road trip with two more wins to tack onto their record, after winning a thriller on Saturday, 4-3, and then dismantling the Explorers on Sunday through a convincing 7-0 win.

In Saturday’s match against the Dragons, the Raiders got back into typical form by nabbing the doubles point to get off to an early 1-0 lead. From there, the Raiders earned three key wins in singles matches to secure the 4-3 win. At No. 1 singles, sophomore Jacob Daugherty won in straight sets against first-year Andrew Sinai 6-1, 6-2. At No. 2 singles, senior Nick Laub had his win streak snapped against senior Xabier Saavedra, falling 1-6, 6-3, 6-3. First-year Noah Rosenblat came up big for the Raiders, coming back after dropping the first set 5-7, to defeat sophomore Balaji Lakshmanan 6-4, 6-4 in the final two sets. Junior Bobby Alter fell in straight sets to sophomore Hamza Laalej 6-4, 6-2. Fellow junior Jake Hirschberg suffered a similar fate, falling to first-year Sinan Orhon 6-3, 7-6 (8) in what could have been an integral loss if junior Win Reynolds had not held down the six spot. Reynolds defeated sophomore Kashyap Ashok 6-3, 2-6, 6-2 to seal the win for the Raiders.

Daugherty lauded both Reynolds and Rosenblat’s tenacity this weekend as the Raiders came away with two huge victories.

“Noah and Win had some huge wins this weekend, as they both won tight three set matches against Drexel. Props to Win for battling in the final match and clinching the 4-3 victory,” Daugherty said.

Head coach Bobby Pennington was excited about the Raiders’ success this week.

“Each week the guys get tougher physically and mentally,” Pennington said.

Certainly this tight win followed by a sweep might just be the spark the Raiders need to reel off a slew of wins. After a couple tight 4-3 losses this season, the men were able to band together and pull out the win.

As the Raiders hit mid season form, Daugherty reiterated what coach Pennnington has certainly stressed the past couple seasons.

Indeed, Colgate displayed the type of resilience necessary to succeed in the Patriot League postseason, so it will be important to continue this against tougher opponents as their schedule gears up.

The Raiders return to action this weekend when they host the Roberts Wesleyan College at the Turning Stone Sportsplex at 2:00 p.m. on Saturday. The Redhawks are currently riding a three match winning streak, so it should be an interesting match to watch. Hopefully the Raiders can use their momentum to get a win.