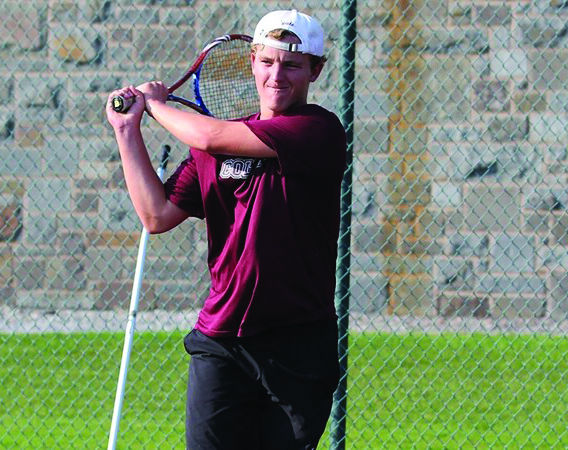 The men’s tennis team kept their winning steak alive this week, sweeping Roberts Wesleyan University by a score of 7-0 at the Turning Stone Sportsplex. The Raiders improved their record to 8-2 on the season, only dropping one set on the day.

In the doubles round, things started off slow, with sophomore Jacob Daugherty and senior Tom Haile losing to senior Robert Beer and senior Charles Farres 7-6 at the 1st spot. The second and third teams for the Raiders, however, were able to secure the coveted doubles point. Senior Nick Laub and junior Bobby Alter defeated sophomore Jose Maria Carrillo and first-year Jose Lopez Tapia 6-0. Colgate juniors Dean Koman and Jake Hirschberg beat senior Rene Torti and junior Guilherme Plentz de Liz 6-4. Securing the doubles point has certainly been emphasized by head coach Bobby Pennington for the past couple seasons as an absolute must if the Raiders hope to make a deep run in the postseason.

At 1st singles, Daugherty continued his dominance, beating Farres in a nailbiter 6-4, 7-6. Laub bested Beer at 2nd singles 6-2, 6-4. While the Raiders have histoically been a very deep team, one thing to note this season is the depth at the top of the lineup. With both Daugherty and Laub capable of playing at the 1st singles spot, coach Pennington is able to adjust the lineup from match to match depending on the skill of the other teams. If the opposing top player is especially weak against left-handed opponents, Pennington can insert Daugherty at the top of the lineup. Conversely, if their top player has trouble defending big, fast serves, Pennington can put Laub at the top spot. It will certainly be interesting to see how Pennington manipulates the lineup as the season progresses. First-year Noah Rosenblat has had some very exciting matches the past couple weeks. This week, however, he steamrolled Carrillo, 6-0, 6-1.

“We’ve made a concerted effort to have a sweat going [before the match starts], and [Noah] made a point of coming out energized with great footwork and overall play. He played really clean and efficiently, which certainly helped Jacob and Laub, who were out there at 1 and 2 for a while,” Pennington said.

It certainly helps the other players when they see a teammate cruising through a match next to them, as it helps the players loosen up and play a little more freely. Alter cruised to a 6-1, 6-3 win over Lopez at the four spot, and Hirschberg dismantled Torte at the five spot, 6-3, 6-4. At 6th singles, junior Win Reynolds knocked off Plentz de Liz 6-2, 6-0.

The Raiders hope to extend their 3-match win streak this weekend when they travel to New Jersey for a three-match roadtrip. On Friday, they’ll take on Siena, followed by the New Jersey Institute of Technology on Saturday and Hofstra University on Sunday. Pennington explained that with the cancellation of the spring break trip, he decided to tack on these two additional matches against NJIT and Hofstra to make certain the guys are prepared for the Patriot League stretch. These two quality opponents are certainly going to test the fortitude of the Raiders, who have cruised through two relatively weaker opponents the last two outings.

“[We’re] playing really good teams coming up and the level of play is going to dramatically increase this weekend,” Pennington said.

More importantly, these are the last matches the Raiders will play before Patriot League play begins, so gaining some momentum from this roadtrip may prove to be imperative for the Raiders before they begin their Patriot League schedule. One note about the Raiders’ strength of schedule in interleague play this season is just how favorable it is for the team. Over the past ten seasons, either Army or Navy has won the men’s tennis Patriot League regular season title. This season, the Raiders have a schedule that features neither of the traditional powerhouses, thereby giving the Raiders an easier path to a better postseason seeding. Last season, the Raiders fell to Bucknell in the first round of the postseason after securing the No. 4 seed in