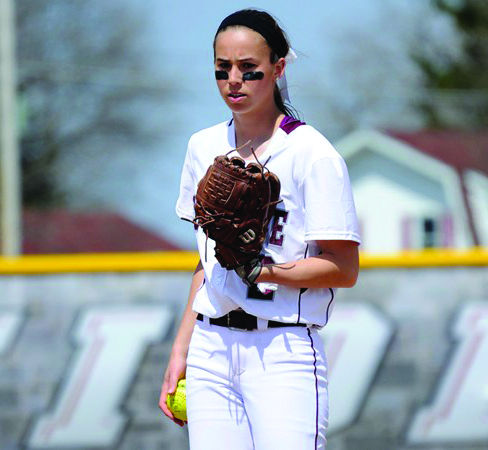 Senior pitcher Brigit Ieuter pitched many scoreless innings for the Raiders throughout the Stetson Invitational tournament.

The women’s softball team opened their season with a five-game, three day weekend in Deland, FL against Pittsburgh, Stetson University, Southern Illinois, Providence and then Stetson again at the Stetson Invitational Tournament. Unfortunately, the Raiders lost all five games, but gained some very valuable experience as to what they need to work on as they head into the bulk of their season.

In the first game against Pittsburgh, the game was tied at 4-4 for the majority of play. Going into the eighth inning, however, Pittsburgh was able to secure their victory with a three-run go, ending the games with a Raiders defeat at 7-4. Specifically, junior Gillian Murray posted an impressive 3-for-3 performance at the plate. Senior pitcher Brigit Ieuter also posted an impressive game, only giving up seven hits after pitching for six innings.

During the second game, against Stetson, the Raiders got down early on and were unable to capture a victory despite coming back and scoring runs later in the game. During the first four innings, Stetson held a 6-0 lead over the Raiders. That would change once junior outfielder Katie Bushee got up to the plate and drove an impressive home run to get the Raiders on the scoreboard. With that momentum already established, the Raiders kept on tallying runs until they were only down by one, the score being 6-5, still in favor of Stetson. From there, Stetson recorded two more runs to the Raiders’ one, and ended the game victorious over Colgate, with a final score of 8-6. This was undoubtedly a tough first day for the Raiders down in Florida. While the weather was certainly much warmer than what the women were used to up in Hamilton,  they still came out with cold feet and recorded their first two losses of the season. When asked about the day’s performance, head coach

“I thought the team battled hard today, and even though we didn’t get the outcomes that we wanted, there were a lot of positives. We were relentless and set the standard for how we are going to take the field every time we play this season. We got into a little trouble with some defensive miscues in both games, but we answered with some really high quality at-bats. We hit the ball hard today, and good things will keep happening if we have that consistent

The Raiders suffered a heavy defeat during the second day from Southern Illinois, losing the game 4-0. Although this defeat might have landed a critical blow to the team’s mentality, they were able to head into the game that night with their heads held up high and give Providence a run for their money. Although they ended up losing the game 6-5 after a competitive and intense eight innings, the Raiders have a lot to be proud of. For example, both Bushee and sophomore third basemen/pitcher Holly Geranen each recorded three impressive hits for the Raiders.

As for the final game against Stetson, the Raiders fell 1-0 to the host team. The game, however, was very intense and hard-fought on both sides, with both teams remaining tied for the majority of the game. It was only in the eighth inning that Stetson was finally able to score and claim victory over the Raiders. The stand-out player for the Raiders was Ieuter, who pitched seven straight innings without any runs recorded. Given their effort, this was

certainly a tough loss for the Raiders.

“While we didn’t get the results that we wanted this weekend, we saw some great competition and learned a lot. We had a lot of opportunities to test the team in different situations, and while we lost some nail-biters, I know it will only make us better in the long run,” Finley said.

The Raiders now enjoy a week off from any games or tournaments and then travel to Davis, Ca. to play in another five-game weekend during spring break. While the Raiders are now at an overall record of 0-5, there is still a lot of time to turn their season around.

Hopefully, these first games served as a wake-up call for the Raiders, and they won’t have cold feet out in beautiful California as they take on more tough opponents in back-to-back games. Pacing themselves and keeping their heads about them will be absolutely crucial for the Raiders.